GKOMs to meet with freshmen Oct. 24 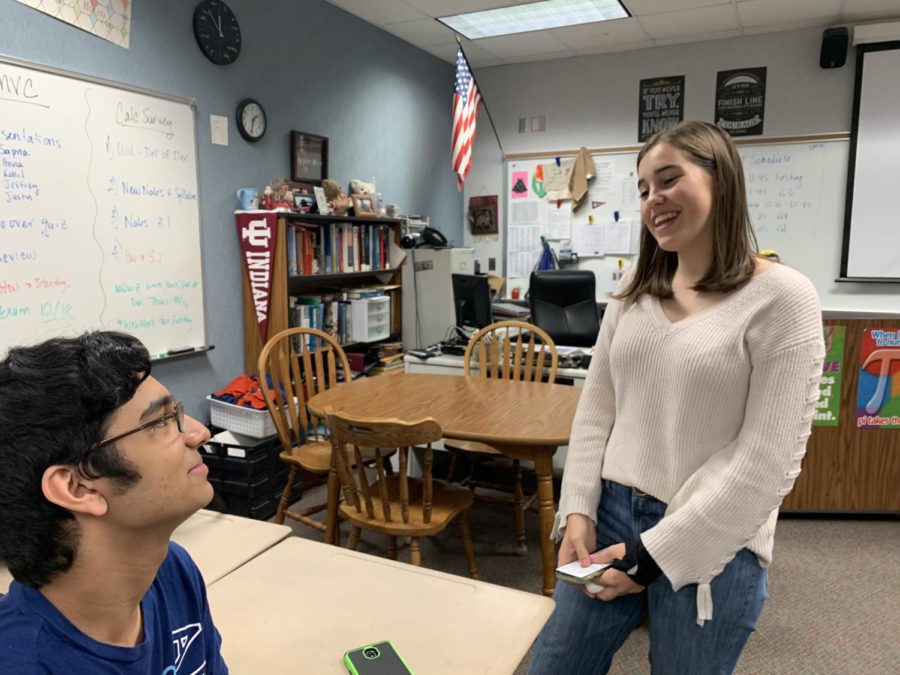 GKOM and senior Anna Berger Romeau talks with senior Abinay Devarakonda. Berger Romeau said one of her favorite aspects of being a GKOM is being able to connect and form relationships with the freshmen.

Greyhound kick-off mentors (GKOM) will meet with their freshmen for the next connections session on Oct. 24, according to sponsor Mike Meyer. Meyer said that there will be a Halloween theme for this connections session along with the talking points as usual.

Meyer said connections session will be less frequent next semester, as GKOMs usually meet with their freshmen once a month right now, but will meet every month and a half during second semester.

He said, “It’s always about the mentoring process and making it fun and trying to encourage them to get involved and get active. It’s also about making sure that students feel like they are part of the culture here at Carmel High School.”

“(The GKOMs) should get to know (their freshmen) and actually go out and meet with them outside of school, not just the assigned times. The talking points themselves are just guidelines, they’re not something (the GKOMs) should just go through word for word and just move on,” he said. “It should be ‘This is what I’m talking about today for a moment,’ and elaborate and if the freshmen add questions, they should add onto it.”

GKOM and senior Anna Berger Romeau said this is true for her group. She said, “I usually go through the talking points quickly because the freshmen want to talk about other things. But I’ll make sure to let them know about something if they need to know.”

Additionally, Meyer said the GKOM Council this year has done a good job thus far. He said, “The (GKOM) Council is very outgoing. (The members) are very intelligent and they really seem passionate about the program. They are very good and a very cohesive unit from everything I’ve observed and I think they’re a great group of kids, as always. Everybody wants to do well.”

However, Meyer said he feels there’s a challenge with communication this year due to the lack of GKOM Council’s own SRT.

Meyer said, “I need to communicate better with (the GKOM Council). We’ve had a change where I was anticipating they would be in my room but due to some administrative things, we’ve chosen not to have them here. With that said, they can visit anytime but they’re not scheduled in here, so I have to constantly communicate with them. Sometimes I’m more focused on my new position here at the high school than I am in being a truly good sponsor, or as good as a sponsor I feel I’ve been in the past.”

Berger Romeau said, “I’m excited to see (the freshmen) again. We’re bringing them pizza next time because that’s what they really wanted.” By Anushka Dasgupta