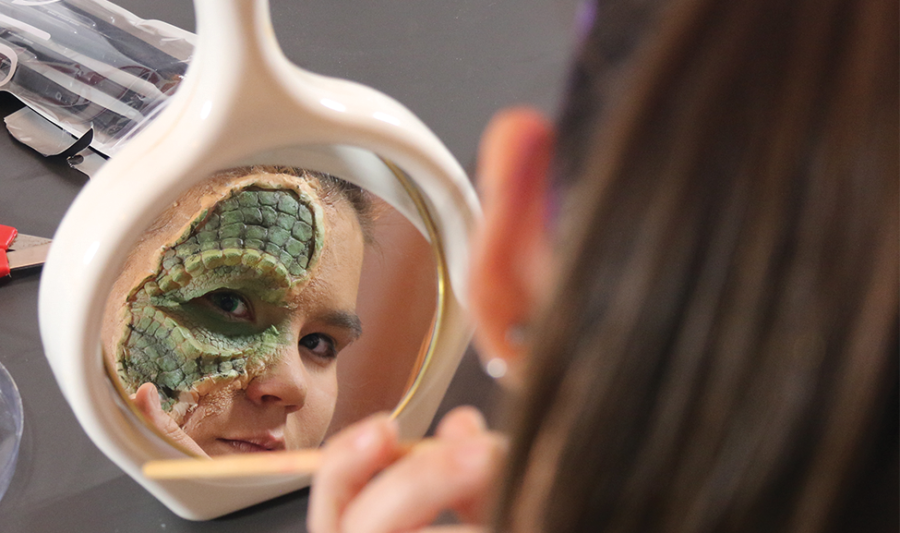 Aggressively rubbing paint onto a bald cap might be an uncomfortable, once-in-a-lifetime experience for most, but for senior Hannah Smith, it is just another part of her job as a special effects makeup artist for the CHS theater community. Smith works with prosthetic or special effects makeup to change an actor from a normal-looking human to virtually anything or anyone.

Compared to cosmetic makeup, which highlights attractive features to meet societal or personal beauty standards, prosthetic makeup focuses on elements of gore and disfigurement. Artists use various materials such as latex, plastic and silicone to add inhuman body or facial features to accentuate a character’s backstory or emphasize their visual dissimilarity compared to the socially accepted human form.

The creative process and unfamiliarity of prosthetic makeup has increasingly gained attention and inquiry with the release of hit movies with nonhuman characters such as “Joker” and “The Nun.” CHS makeup artists will use this offbeat approach when applying makeup on actors to turn high schoolers into aliens in the “Cheerleaders Vs. Aliens” plays which run until Nov. 16 with shows at 7 p.m. in the Studio Theater.

According to Smith, with the current generation’s involvement in social media and pop culture, more of the younger generations are starting to appreciate the deviant art expression due to easy access to supplies and ideas. Smith said people are starting to appreciate everything that is different, and prosthetic makeup boosts curiosity and appreciation to anomalous components of external appearance.

“I feel like (special effects makeup) is allowing abnormal, non-traditional beauty to be considered as beautiful. You’re seeing people who are creating monsters, but it’s just a person,” Smith said.

“The introduction of more heroic, fashionable characters who require special effects in movies and TV has led people to see this type of makeup as a method to recreate looks,” Connelly said.

“Special effects makeup isn’t your normal artwork,” Schrader said. “You can be a lot more messy and it still looks really good.”

In a progressive society pushed by the spread of ideas through social media, people of all backgrounds are encouraged to express their emotions in healthy and expressive ways.

Like Schrader, Smith said many people are beginning to realize prosthetic makeup is powerfully effective in its ability to visually express a wide variety of emotions due to its infinite variety of looks one can wear compared to cosmetic makeup, which, she said, seems to have an exact application process.

Smith said special effects makeup is a highly personal expression of emotions since the story behind the look is perceived differently by all without using direct communication.

All in all, both Smith and Schrader said they believe special effects makeup acts as an important path to societal acceptance of differences, by crushing beauty standards with its positive illumination of outlandish features and allowing more creativity in how to display emotions and feelings.

“(Special effects makeup) is non-conventional. It’s not what you would expect to be beauty because of all the gore. There is a specific type of beauty with (special effects makeup),” Schrader said. “It’s showing people you don’t need to have your typical beauty with your eyeshadow, or lipstick, or whatever. It’s showing people that what you think is beautiful is beautiful.”