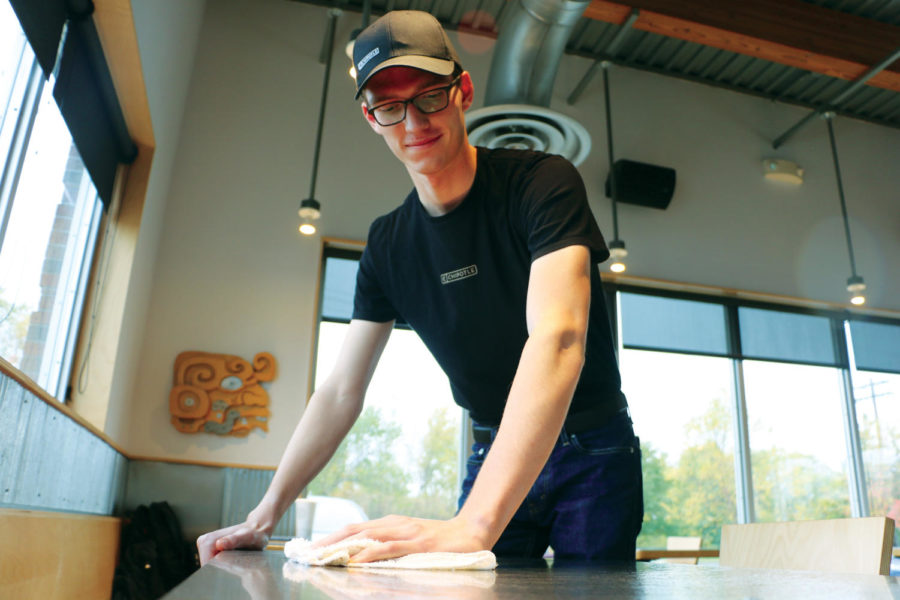 Ben Ring, Chipotle employee and senior, wipes down a table during one of his shifts at Chipotle. Ring said cleaning up is one of the responsibilities he has as a worker for Chipotle.

Ben Ring, Chipotle worker and senior, is among the many students at this school who have an after-school job. While many high school students already work in order to gain benefits such as real-world experience, Chipotle has taken the extra step by covering the tuition cost for their employees to earn technology and business degrees from certain colleges. 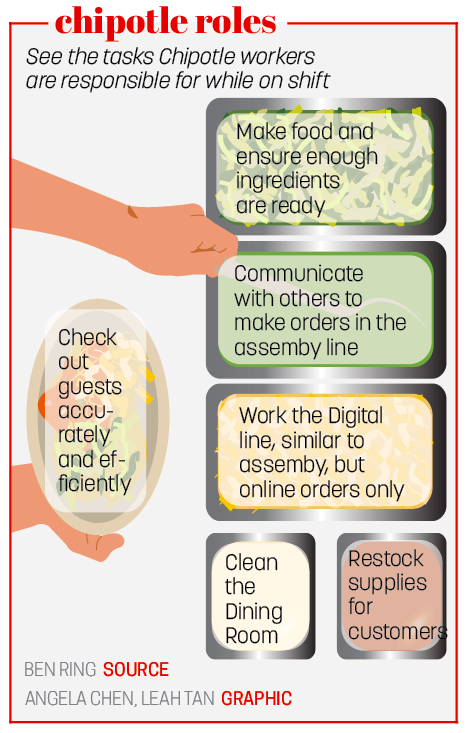 Ring said, “I think it’s great that (Chipotle is) willing to invest that much money back into their employees to help them become more educated and develop their skills outside of working.”

Chipotle is scheduled to implement this program today. Before this new program, Chipotle already had some rewards programs in the working. The chain already offers up to $5,250 a year in tuition reimbursement on top of other educational programs for employees. According to Chipotle, the program is an attempt to entice talented workers in a highly competitive field, as well as a method of showing current and potential employees that they are committed to advancing the educational welfare of employees. Melinda Stephan, College and Career Resource and Programming Coordinator, said she supports Chipotle’s plan and thinks it is a good one.

Stephan said, “I think (the program) is awesome. I think that what we’re seeing right now is (that) there are a lot of industries, companies and organizations (that exist). Unemployment is also pretty low right now, so we’re seeing a lot of needs. (Companies are) trying to fill jobs and I think one of the ways they’re working to do that is by creating incentives such as tuition remission, or helping their employees get an education, or increase or further their education. It’s a win-win.”

Stephan said there are lots of reasons as to why students decide to get jobs in high school.

“Sometimes it’s out of necessity,” she said. “They need cash to pay for things that they want or potentially need, and the necessity will differ from student to student depending on the family situation.”

As for Ring, he said his decision to work was about more than just the financial aspect.

“It’s nice to have extra money when I want to go out with friends,” Ring said. “The experience is good and there is something to be said for longevity and commitment (to a job) over time. A lot of the times when colleges are looking at applications, they’re not looking at how many things you do, they’re looking at what (you did) and what (you are committed to).”

Personally, Ring said he enjoys having a job regardless of just the tangible benefits he receives.

Ring said, “I think (having a job is) something that I want to continue and not take a break from. It helps me stay responsible outside of school, and I think there’s a lot of benefits of working.”

Stephan said it is those alternate benefits that really reap rewards for the student’s future.

“Any kind of experience you can have with showing up on time, working with coworkers, following directions and completing tasks, meeting goals depending on what kind of job you have, (is) customer service,” Stephan said. “There’s not anything you do in this world that doesn’t involve some kind of customer service. So any kind of experience you get with that in high school is certainly helpful.”

Benjamin Keys, Panera employee and senior, said he agrees with both Ring and Stephan in that working as a high schooler can offer a wide variety of benefits that is not just limited to the financial aspects.

Stephan said she believes job experience can provide students with a competitive edge against other students who do not work.

Stephan said, “Students who work part-time are actually better time managers, although it’s also about how many other commitments you may have. That job has to fit into the big picture, but I think it can actually help students do all the other things even better.”

The benefits offered at jobs are often attempts by the company to improve the establishment for both its employees and customers. According to Chipotle, the company’s turnover rate in 2018 was at a staggering 145%, which is another key reason as to why Chipotle wants to implement this program. Chipotle said it hopes this program will reduce that high rate of employee turnover, which is a key factor in improving efficiency, customer service and the overall working environment. The latter item—the conditions in which employees work—can also play a role in whether students like Keys stay at a job.

Keys, a former Chipotle employee, found the working environment at Panera to be significantly better than that of Chipotle.

“(At Chipotle) it seemed like they cared a lot less,” he said. “There were just a lot of little things; I worked in the front line and I burnt my fingers like every two minutes. It was one of those things where you burn your fingers until you’ve callused them up a good deal, and then you were fine. Whereas at Panera, they make sure you’re safe,” Keys said.

Furthermore, Ring said that he can see how the working environment at Chipotle can be intense and stressful at times.

“At times, it can be a very high-stress working environment. The company expects a lot from everybody,” he said. “When we’re at our busiest or it’s a holiday or something like that, it can be really hard, but at the same time, I think that it’s a way to strengthen your character and prove your endurance through difficult situations. But I can definitely see how it can be challenging.”

Despite the improvement in working conditions, after experiencing the workplace of both, Keys said he found the benefits at Chipotle to be slightly better than those offered at Panera. He said that, to the extent of his knowledge, Panera does not offer any benefits related to college, and if they do, he said he hasn’t been working there long enough to receive them.

Keys said, “Chipotle has better benefits than Panera by a little bit, I think, but I know that a lot of food services have programs like (Chipotle’s new program). But people don’t realize that a lot of (the programs) are like, ‘We’ll give you this benefit if you’ve been working here for like six years.’”

According to Stephan, many students make the choice of where to work not necessarily based on the benefits offered at that job, but more so out of convenience. Stephan also said students may consider college-related benefits offered by different jobs; however, oftentimes they are unaware of the benefits available to them until after they have already made the decision on where to work.

“Usually you find out about (college-related benefits) once you are already working for the organization,” Stephan said. “High schoolers have so many things that they are balancing. A lot of times when they are looking, especially that first job, they usually just want to find something that is convenient. If they don’t drive, they have to be able (have someone) drive (them) to it. Or if they do drive and they don’t want to spend a lot of money on gas getting there, the hours have to be flexible for what they are doing. (Convenience) might figure into the decision (if they wish to) stay there.” 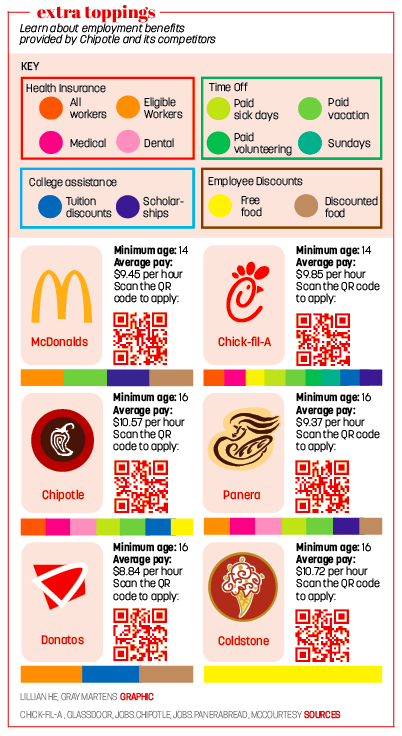 In addition to continuing to work throughout high school, Keys said that if there is a Panera convenient to the location of his college, he would like to continue working there throughout college as well. Keys also said his initial reason for choosing to work at Chipotle was one of convenience as there was one located near his house.

Similarly, Ring said his current plan is to continue working at Chipotle for the duration of high school and college. However, he said he isn’t quite sure yet.

“I’m not sure yet. I don’t want to plan too far out with that sort of thing, but the plan is to keep doing that,” Ring said.

Even though Ring hasn’t thought too far ahead in the future, he knows he will continue to gain life experience from working at Chipotle.

Ring said, “Having a high school job is great because it gives you spending money to go have fun with, but more importantly it gives a taste of the real world, beyond school, through the experiences (the job) comes with.”