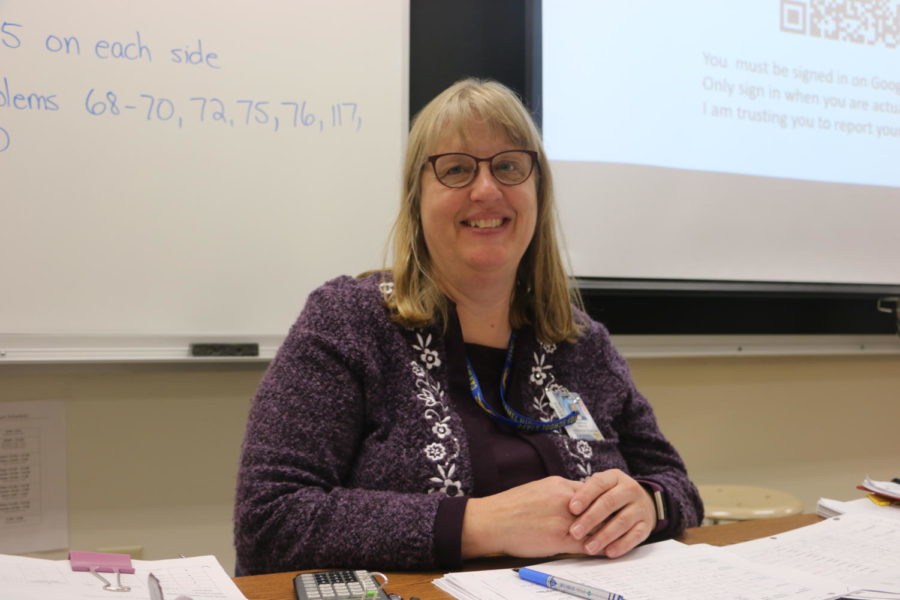 Can you describe your journey through STEM?

I started off when I was a kid, really. When I was probably a preteen, I was given a chemistry set for my birthday. I started using it and I thought it was cool, so I knew I liked chemistry. I liked chemistry when I took it in high school. When I went to college, my first semester I was in a chemistry class, and I liked it enough that I declared my major to be chemistry—I didn’t know before that.

And then, I had children. So I stopped, I quit working and I didn’t work for a long time. I stayed home with my kids. While they were growing up and going to school, I kind of went to school with them. I volunteered at their school, I did the PTO thing and I actually was spending more time at school than not.

So, I decided to merge my love of being with kids and teaching kids with my love of chemistry, and now I teach chemistry.

How was working at Eli Lilly different from working as a chemistry teacher?

Well, they’re really different. When I was working at Eli Lilly, I was what’s called a bench chemist. We would work in groups to make compounds, so I would make different compounds, and they would go through testing to see if they would make good pharmaceuticals.

Teaching, I get to with kids all day and be with kids. I worked with people sometimes—well, I did work with people quite a bit at Lilly, but I like to see the energy that kids have. I like to see them grasp something that they haven’t grasped before. I love working with Science Olympiad kids because they are working towards a goal, and they get excited, and it’s great to be with them and see that happen.

I think the STEM fields are very logical and concrete, and my mind is kind of logical and concrete. My mind works that way. When you talk to me about social studies or English—that’s kind of over my head. There’s not a right answer all the time, and I really like concrete, right answers. Most of the time in STEM, there’s an answer or there’s a way to find out that answer.

Given the underrepresentation of women in STEM as a whole, what were your experiences like?

Well, I went to school a long time ago, so there were not many women in my chemistry classes. It was probably 10% female—I do not remember for sure—but there was a noticeable lack of females when I was in school. I hope that it’s getting better now because it’s been quite a while since I did it.

I really hope it’s getting better, and part of what I would like to do is to inspire more women to go into chemistry. I hope that my female students who see me teaching chemistry and knowing chemistry—I hope it helps them realize that they, too, can be successful at it.

Have you faced any challenges as a woman in STEM?

Well, I’ve been lucky. I don’t know that I have ever had a negative experience with that, but I have been part of very progressive organizations. The University of Michigan has always been very forward-thinking, so I did not have any issues there, and the same (goes) for Indiana University where I did my first master’s. Eli Lilly, of course, has always been very accommodating, and they have made it clear that they want females in all positions. So I have not, to my knowledge, been discriminated against in that sense, but I’ve heard of many people that have been.

Well, I think they certainly should. My best advice would be, don’t let anybody tell you you can’t do something. That has been a big motivator for me. If somebody tells me I can’t do something, it’s like, “Well, that’s a challenge. I’m going to see if I can do that.”

And I think sometimes, girls need a little more encouragement to stretch themselves. I think that they just need that extra encouragement or to see successful females in STEM fields.