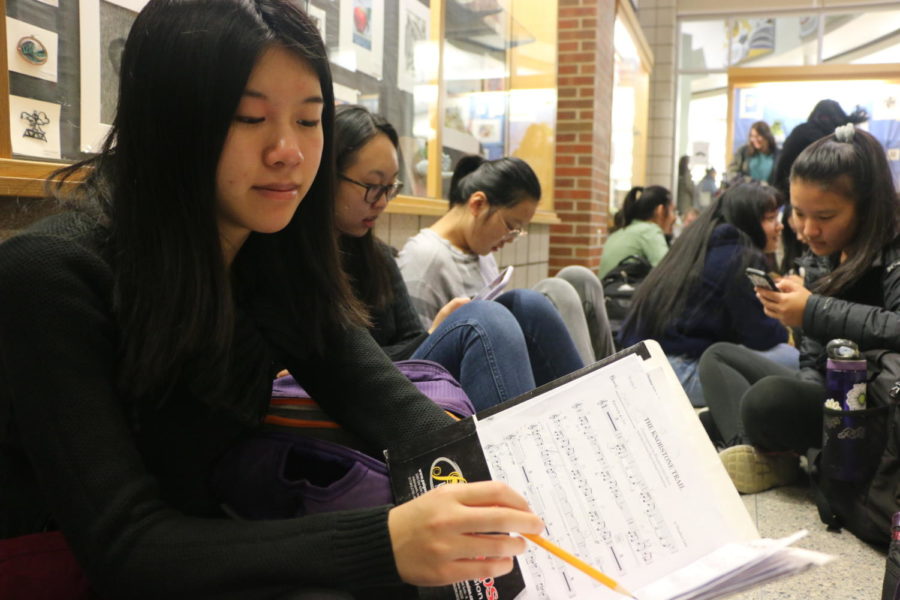 Chloe Chui, member of Symphony Orchestra and junior, looks over her music for the upcoming performance at the Midwest Band and Orchestra Clinic. Chui said she is looking forward to performing in Chicago on Dec. 18.

The CHS Orchestras will perform on Dec. 12 in the Dale E. Graham Auditorium. According to director of orchestras Elisabeth Ohly-Davis, there will be two concerts: one at 6 p.m. and one at 7:30 p.m.

Besides getting ready for the winter concert, the Symphony Orchestra has also been preparing for their upcoming performance at The 73rd Annual Midwest Band and Orchestra Clinic in Chicago on Dec. 18., where they will work with guest conductors such as Soo Han, former director of orchestras, and director of bands Michael Pote. The Symphony Orchestra will also be premiering a piece called “The Knobstone Trail,” which Ohly-Davis commissioned from composer Stephen Lias.

“Dr. Lias is an Adventure-Composer and wrote many works to commemorate the centennial celebration of the National Parks in 2016,” Ohly-Davis said. “(He) backpacked the Knobstone Trail in southern Indiana to inspire the piece that he wrote for the orchestra. Dr. Lias will be at CHS on Dec. 10-12 to work with students and answer questions about composing music.”

Chloe Chui, Symphony Orchestra member and junior, said she has also been focusing on the winter concert and the Midwest performance.

“Those two are definitely our top priorities right now,” Chui said. “We’ve been working really hard on Midwest. It’s been challenging to complete all of our pieces on time, but we’re almost there.”