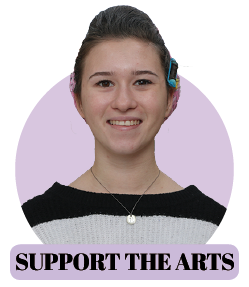 Many students and community members attend Holiday Spectacular, otherwise known as Spec, which is the Carmel Choir program’s largest event. As a member of Accents, our all-female top competition choir, I love Holiday Spectacular season, especially after seeing so many familiar faces in the audience.  I personally feel that our marching band and choirs get the majority of the attention from the community. However, I wish the other performing arts received as much support as we do because while Holiday Spectacular is a fun family event, other performing arts courses, such as band and orchestra, have performances that the community should be just as excited about.

Throughout the year, orchestra, band and choir host concerts that are mainly attended by performers’ family members.  But while family is nice,  I know I get extra excited when at a concert I see my friends waiting for me after the show. I am usually greeted by my parents and sometimes my grandparents or cousins, but walking out from backstage to find a group of my classmates eager to greet me always makes me smile.

Speaking from experience, preparing for a concert or event requires a lot of hard work, focus and preparation so it means a lot when people genuinely care enough to pay attention when we get to present what we have been working toward for months. From a choir standpoint, our most visited events are Spec, of course, but also Evening of Show Choir, where each competitive show choir performs its set from the recently finished competition season along with other favorite songs from previous concerts. However, the performing arts’ fall and spring concerts are not as widely attended. The audience is mainly composed of family—and we love their support—but it means a lot when people who don’t feel obligated to come support us as well.

Yes, Holiday Spectacular is the most easily accessible of the performing arts concerts due to the many opportunities one has to see it, but many other concerts are offered during convenient times as well. For example, when performances are during the weekend, they rarely take up more than two hours total, so it is worth it to come support your friends. If you cannot make it to a concert, please make sure to wish your friends luck and be genuinely interested in the work they have done. And try to make it to at least one concert; trust me your friends will really appreciate your attendance.

The views in this column do not necessarily reflect the views of the HiLite staff. Reach Emily Carlisle at [email protected]