With Gold, Blue games tomorrow, CHS Icehounds express their desire to be a school sanctioned sport 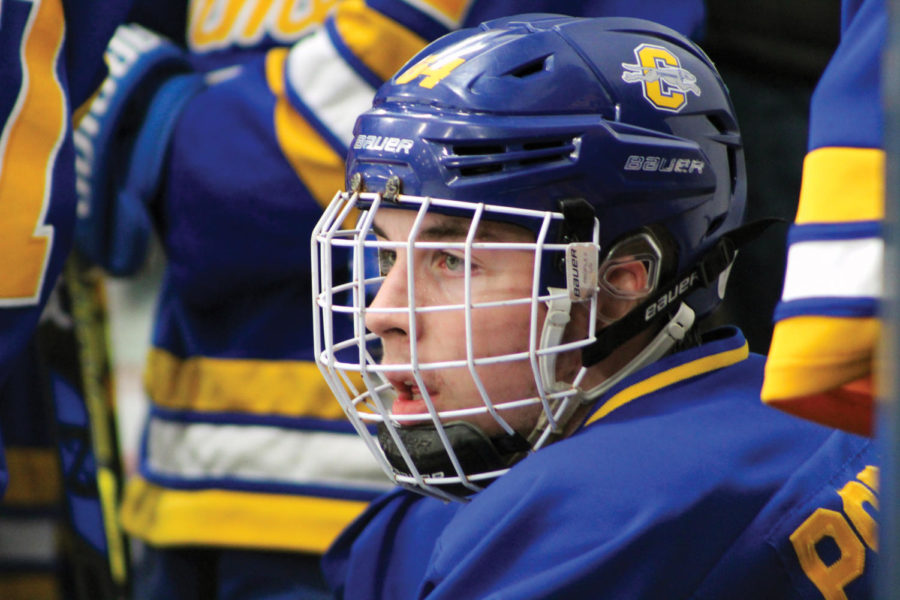 STAREDOWN: Nick Popowicks, a junior and forward on the Icehounds gold team, watches the game after finishing his shift during the Icehounds 5-2 victory over Zionsville. Popowicks said that although some Friday night games have student spectators, there are very few people that watch weekend games. I don’t believe that not being associated with IHSAA has affected our performance, but it would be nice for hockey to be recognized as an IHSAA sport.

At CHS, sports such as basketball, football and soccer are all sanctioned by the school; they have their own fields, equipment and schedules given and organized by the school’s athletics department. However, there are some sports that do not receive as much attention or support from the school, such as hockey.

The students who participate in these non-school sanctioned sports often pay for equipment out of their own pockets and practice venues are not as readily available.

Nash Cheslock, Carmel Icehounds forward and sophomore, said while his non-school sanctioned sport is similar to all the other sports at this school, it doesn’t receive the same recognition, and that, Cheslock said, is frustrating.

“(Hockey) should be a school-sanctioned sport because we’re playing for the school,” he said. “We have the school name on our jerseys. (Hockey and other sports) are both very competitive, we play other (schools) and we always get high rivalry games. We always want to beat (other schools), but we’re not school-sanctioned so we don’t get the support that we want from our school.”

According to Cheslock, another drawback to hockey being a non-school sanctioned sport is its equipment and facility costs. Cheslock said he has to pay for his own equipment and practice times because his sport is not school-sanctioned.

“Ice time is very expensive, so that’s a big reason why we don’t play (as much),” Cheslock said. “The football stadium—that’s school property and it’s free for anybody’s use, but the rink is city property.”

However, according to Cheslock, changing hockey from a non-school sanctioned to school-sanctioned sport would fix the cost problem for students and encourage more people to participate.

“I think more people would be encouraged to play because the cost of play (would) go down a lot,” Cheslock said.

Carmel Icehounds coach Dan Desmond said cost was indeed a big issue for students in non-school sanctioned sports. Desmond said he agreed with Cheslock’s claim that hockey would attract more players if its cost went down.

“100% of the cost to play is covered by families of the players,’’ Desmond said. “On an individual level, equipment is also very expensive, far more than most other sports. If we were affiliated to the school and had financial support for some of these expenses, I believe that would help draw more people to play high school hockey.”

However, becoming school-sanctioned isn’t an easy process. According to Assistant Athletics Director Bruce Wolf, there are many elements to consider when deciding whether or not a sport will be made school-sanctioned. The Indiana High School Athletic Association (IHSAA) plays a part in the decision as well.

“There are multiple criteria/considerations for school sanctioning,” Wolf said via email. “Initially, CHS has sanctioned IHSAA-sanctioned sports as an initial criteria. Some of the other criteria/considerations include student interest, available practice and competition venue (controlled by the school), acceptable contest schedule, resources required if adopted and adherence to state and federal mandates.”

Schedules and balancing with school is another area Cheslock said his sport struggles with. He said his sport usually disregards school hours and he sometimes finds himself having to leave school early to play hockey.

According to Wolf, that very schedule is another reason why hockey is still a non-school sanctioned sport. Wolf said due to the fact that many schools in the area do not have a hockey team, the teams at this school must travel long distances to play their opponents.

“There aren’t a lot of schools that have hockey,” Wolf said, “and therefore to develop the schedule, frequently you have teams traveling long distances to play their contests, which (the school would) rather not do if we can help it.”

According to Wolf, however, hockey can become school-sanctioned if the IHSAA adopts hockey as a sport.

“Once the IHSAA adopts a sport, it’s automatically reviewed by the school to see if it should be adopted, and frequently, it has been,” Wolf said.

Another way a sport can be school-sanctioned, Wolf said, is if the leadership organization of the sport contacts the athletics department and discusses ways for the sport to be implemented into the school’s other school-sanctioned sports and schedules.

One recent sport that followed those protocols was lacrosse.

Wolf said, “(Lacrosse’s leadership organization) began a dialogue about three years ago with us and discussed what kinds of things they needed to do over a three-year period to get more in line with other school-sanctioned sports.”

But communication is not the only consideration, according to Wolf. For example, Wolf said members of the hockey leadership organization started asking the department long ago to be school-sanctioned, but they still have not been approved.

Despite the reasons and factors that come into play, Cheslock said he hopes in the future his sport will become school-sanctioned.

Cheslock said, “I hope in the near future hockey is school and state-sanctioned so we get cheaper team fees, better ice time and more support from our student body.”