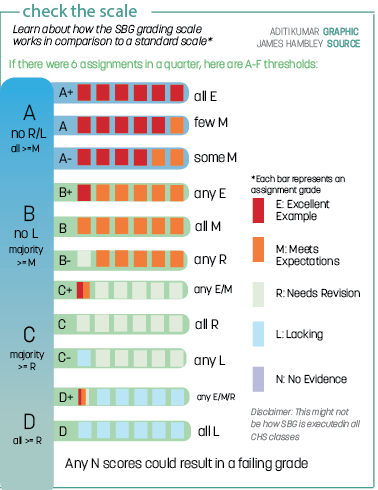 Earlier last month a small group of chemistry teachers were invited to the National Science Teachers Association Conference in Boston. There this small group of teachers hope to discuss progress with a new rubric that has been continuously updated in the past 10 years under Science teacher Jeremy Horner, who teaches chemistry. The scale is called the Standards Based Grading scale (SBG) and according to Horner is an umbrella term for a collection of grading practices.

To summarize, the SBG is a rubric of five grading letters. According to the rubric the highest is E and it goes down to M, R, L and finally N. An N grade is only given to work that is “grossly incomplete” according to the rubric. For a student to get an A- for the period he or she must not have any R’s and L’s and have mostly E’s and a few M’s. To get a C+ for the period a student must have a few R’s and any number of E’s and M’s.

“The SBG and the grading reform practices actually acknowledge the subjectivity in grading. We use a rubric because there are actually fewer places we can accurately rate student work. The rubric gives you four or five levels to do that whereas a 100 point scale gives you 100 levels to do that. No human evaluator or teacher is that good,” Horner said about the scale. Where Horner may call it accurate, Naomi Grossman, chemistry student and sophomore said she has only heard confusion from her friends.

“They’re not quite used to how it works and I feel like they shouldn’t be stressed about the actual grading scale. They should be stressed about the subject. I’ve never heard anything positive about it. I’ve only heard confusion and concern about how the grades actually work,” she said. Grossman said that she feels lucky to be in a chemistry class without the grading scale. “I’m glad that’s one less thing I have to worry about,” she said.

Science teacher John Clark who teaches chemistry without the SBG grading scale said that he thinks the scale could be useful for other classes, just not classes like chemistry. “There might be other subjects where that kind of grading scale makes more sense like writing an English paper. There sometimes I wonder how do you decide point values on everything. ‘You know what the standards are, yes you got them, no you didn’t get them.’ To me that kind of a product lends itself more to that kind of grading more than a say a quiz or a test.”

Jackson McDole, chemistry student and sophomore said that he personally can’t find any problems with it. “I don’t know what can be improved because its fine for me.” He said that he found it to be as difficult as the more standard grading scale and the only problem was the lack of the scale in other classes. “If the (whole) school adopted it then that’d be cool, it’s just having different grading systems in different classes is what I don’t like.”

According to Clark, this scale and developments related to it is part of a larger conflict in the handling of science education. “What’s more important? The content knowledge or the process and the development of the thinking? So there are two big camps of people out there that think content knowledge is what’s important or the process and the skills and thinking through things is important. Essentially it’s hard to find anybody who has a perfect balance of the two worlds, so that approach what they’re doing is focused on the process of skill development which is good. We need people who can think critically in science, but at the same time their level of content knowledge is less (because) they’re taking less information with them, they’re taking more skills potentially with less information.”