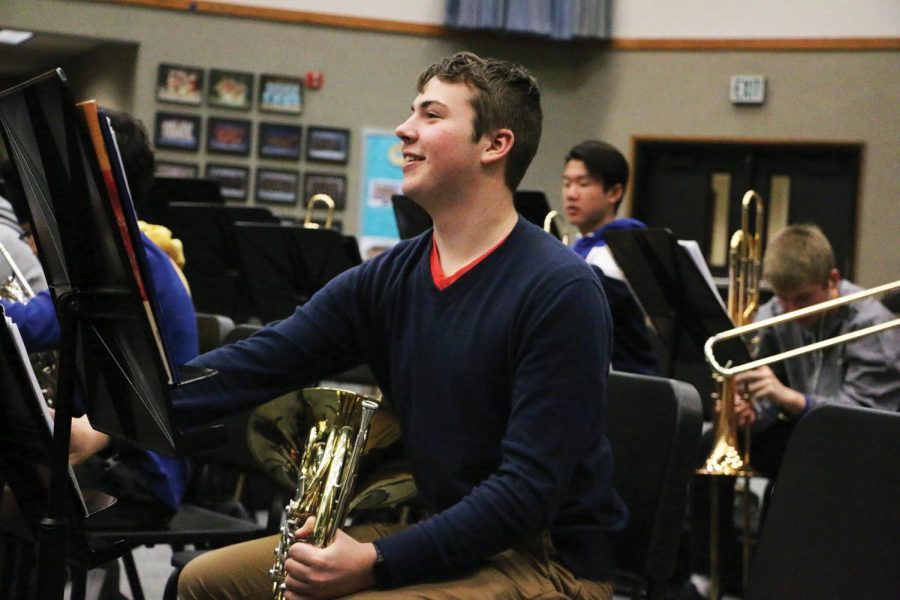 Junior Andrew (Andy) Schmidt plays around on his french horn during a break in Wind Symphony III. He said his favorite part of concert band is playing different types of music and the class helps him reenergize before the rest of his school day.

Sophomore Sierra Hunnicutt plays bassoon for Wind Symphony III, the Marching Greyhound and the Bassoon Ensemble. She is also a member of the CHS pep band, which plays during basketball games. She said compared to other musical extracurriculars, pep band removes the pressure on herself to improve and instead gives her a new perspective to what being a Greyhound really means.

“I just think it’s so much fun to be with all the people,” Hunnicutt said. “It’s important to support your team whether it be the one in band or supporting the team that’s on the court.”

The pep band plays intermittently throughout the men’s and women’s basketball seasons. The next game will be tomorrow at 6 p.m. in the varsity gymnasium.

“The nature of the basketball game is more exciting; there’s no predictability to it,” Young said.

Andrew “Andy” Schmidt, Wind Symphony III french horn player and junior, said pep band provides him with nontraditional ways of self-improvement as a musician and as a team player with its access to free basketball games, upbeat music and engaged audiences. He said after he leaves pep band games, he feels better than when he first arrived.

“(Being at a game) is a fun time­—getting to watch basketball and hanging out with the other band kids,” Schmidt said. “I don’t have a favorite memory because they’re all fun.”

Young said although participating is voluntary, students come to have fun with friends and watch their peers play basketball. He said the team and the band rely on the other’s spirits for encouragement.

“It’s one of the more relaxed and laid-back groups that we have,” Young said. “We still work to sound good for the crowd and for the team.”

“The environment is really relaxed and it’s not solely focused on being the best you can be,” Hunnicutt said. “It’s about just being there.”

Schmidt said participants don’t care whether their peers are playing well or not because they are focused on the fun. He said it’s more fun to play in band when one is playing in a chaotic, exciting environment.

“It’s just fun and you don’t have to be good to play in (pep band),” Schmidt said.

Hunnicutt said the aftermath of the game leaves her with a motivated, content mindset.

Young said the music the pep band plays also adds to the fun.

“Most often, it’s popular tunes, ones everyone in the crowd would recognize,” Young said. “They can sing along or just enjoy listening.”

Hunnicutt and Schmidt said while they will miss their band directors and friends after high school, pep band provides them with the opportunity to make lasting memories they will look back on and remember fondly.

“I remember my freshman year in pep band, we got to play a lot because there were so many time outs,” Hunnicutt said. “It was constant music, and then, there would be a really good play and we’d play again. The team was doing great.”

Overall, Hunnicutt said pep band provides her with a lot of freedom to explore herself and her interests. She said in the fun, exciting environment, she can take a more modern, yet simple approach to support herself, her musicality and her role as a Greyhound musician.

“Pep band is really a simplified version of band,” Hunnicutt said. “It’s a lot more fun because there’s not a lot of pressure and I get to hang out with all my friends.”