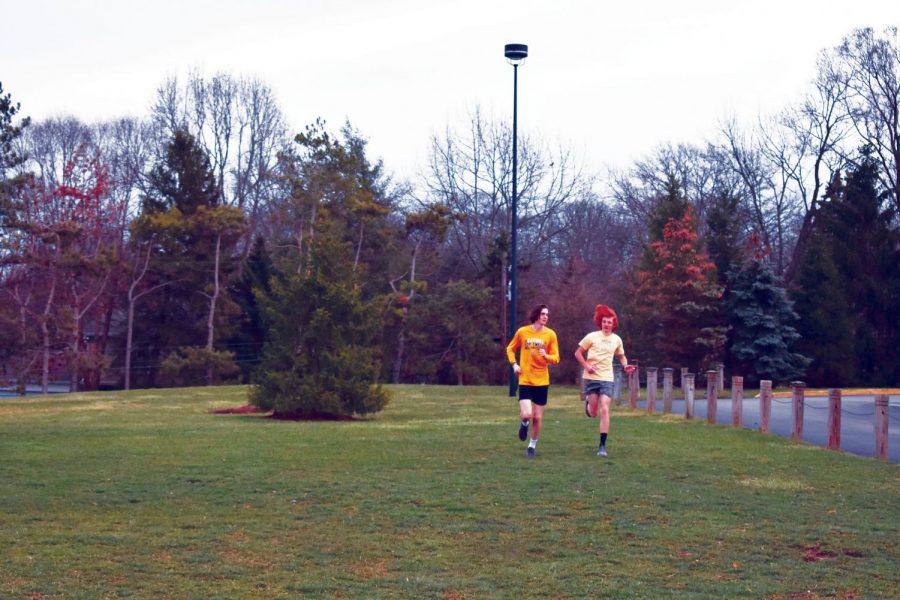 POWER RUN: Junior Bing Hudson (left) and sophomore Charlie Schuman run laps in the field across from Murray Stadium and the Natatorium parking lot. “We don’t meet in December after a lengthy cross-country season, so the boys are excited to meet up in the locker room, run together, and get guidance from our coaches. It is a really good atmosphere that the boys build during the offseason,” Head Coach Colin Altevogt said.

The track season starts in mid-February, but for many varsity runners preparations for the season starts much earlier than that. According to the athletes, those unofficial practices—which are often outside—are frequently cold and difficult but also necessary.

Charlie Schuman, track runner and sophomore, said he and the rest of the varsity team find the Indiana weather troublesome at times when they want to practice.

He said, “During the winter, there can be heavy snow, wind and freezing rain, along with colder temperatures. The places where we run can have ice which makes it difficult to practice some days.”

Bing Hudson, track runner and junior, said he agreed with Schuman about the impact of ice and snow on their running, but he said he does not mind the winter chill that much.

He said, “The cold weather is bad but it’s not that bad if you have the correct gear. I think running in the winter feels fun sometimes and exciting because the weather is really ideal for distance running. I would say most people feel the same.”

Head Coach Colin Altevogt said he agrees with Hudson about the benefits of the colder weather.

Schuman and Hudson both said the colder weather increases not only performance, but also team bonding.

Schuman said, “Especially with distance running, every day is a day to get better and a chance to really have some fun with your teammates, so I believe most guys look forward to the colder practices for this reason.”

Altevogt said most runners decide to build on their performance from the cross-country season during the unofficial practices and those off-season workouts have added benefits beyond the physical.

He said, “We don’t meet in December after a lengthy cross-country season, so the boys are excited to meet up in the locker room, run together and get guidance from our coaches. It is a really good atmosphere that the boys build during the offseason, and that carries with them throughout their time in high school.”

Both Hudson and Schuman said the type of workout the team does varies each practice. According to Hudson, some days the team does a regular run of about five miles; other days they do long runs, anywhere from nine to 12 miles; and some days they just do a hardcore workout.

Altevogt said, “The distance really (varies) based on day, and especially the age and training experience of the runner.”

Schuman added, “Each week, the coaches make a schedule for us to follow throughout the week. Before each practice, we have a small team meeting and then stretch. After we run, we stretch again and then leave to go home. Practice is usually done in two hours, so we leave around 5:30.”

However, these winter practices are just during the preseason. The official practices start in February, and therefore the athletes said they work harder during the spring than they do now.

Schuman said, “In the spring, we have outdoor meets and we tend to do a little more in terms of workouts and mileage. Also, in the spring we don’t have to worry so much about the weather except for rain.”

Hudson added how winter practices are advantageous because they allow runners to build mileage in preparation for the spring season.

“The only big difference between winter and spring training is the amount of mileage we do. So in the winter, we do less mileage and we build up the amount each practice,” he said. “By the spring season, we eventually get up to our maximum mileage and we tend to stay there until the season is over.”

Altevogt said, “Since spring is warmer than winter, we tend to have different workouts in the spring as well as different training than that in winter.”

Even with bad weather and poor running conditions, the track team still practices during the winter because they know that their training will be pivotal during the spring season.

Schuman said, “Running in the winter is tougher than running in nice weather; however, everyone knows when they put in effort during the winter, it is going to pay off later.

“Running in the winter allows us to have a stronger base for later in the season,” he said. “Also, we are able to avoid injury better as well as perform better due to the added training in the winter.”

Despite the poor winter conditions, Hudson said he keeps his eyes on the spring season.

Hudson said, “I push myself through the conditions knowing that I am working towards a goal that I want to achieve. The tougher conditions make me feel loose and in rhythm, so in the spring, I feel more accomplished with my work.”

Learn more about the effects of running in the cold here.