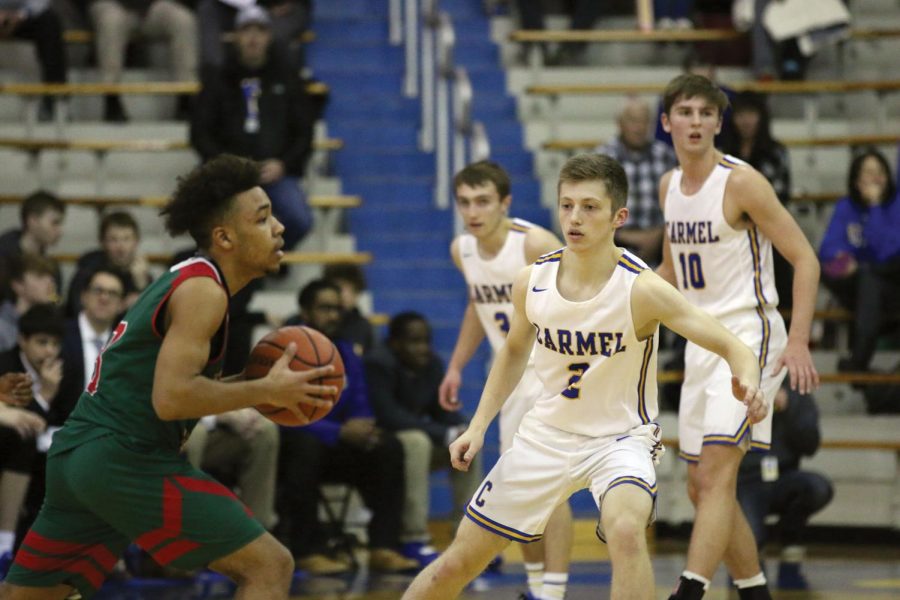 One of the marvels of basketball is the height of the athletes. At 6 feet, 10 inches, John-Michael Mulloy ‘19 was the centerpiece of previous Carmel basketball teams, and the players on the varsity men’s basketball team this year are all over six feet tall. All, that is, except for one: Connor Gioia, point guard and junior.

Gioia is 5 feet, 9 inches tall, but Gioia said he makes up for his lack of height in other ways.

Gioia said, “Obviously there are a lot of bigger guys, but I would say, in terms of compensating for (my height), I’m quick. I would say that I’m one of the faster guys, so that helps when I’m not as tall. (It’s also) just being smart when you’re on the court, kind of knowing when to drive and stuff like that because I’m not going to go in and shoot with big trees in the lane, so (you have) to understand what you can and can’t do. (As a result), high basketball IQ and speed are my two biggest strengths on the court.”

“Connor does everything for us,” Conley said. “He takes care of the ball, which is really important in a high school basketball game, and gets us started on offense. Defensively, we can put him on one of the better guards on the other team, and he loves to go out there and shut that guy down.

“He can hit shots at times, but he takes his role as a distributor first and foremost. I think percentage-wise, he might even be our leading 3-point shooter,” Conley added.

Jackson Jannsen, combo guard and senior who stands at 6 feet 1 inch, said he makes up for his lack of height with his accuracy and volume from the 3-point line, and builds his entire game off his shooting.

He said, “I have always been a guard since I’ve always been a great shooter, so the shooting guard is the most natural position for me. I can handle the ball (from) time to time; working on that has really developed my skills on the court and complemented my shooting.”

Jannsen said conditioning and experience have helped him adjust to the physicality of high school basketball, especially among bigger players. “I’m used to the height difference now. Freshman year I was (a) really small (and) skinny person. Through the years, with APC (advanced physical conditioning) and the coaches helping me lift, I’ve gotten used to the big guys’ manhandling down in the paint. It’s a lot easier now for me being small back in the day, now I can handle the pressure,” he said.

Gioia said he has consistently been among the shortest players on his team, and played point guard for his entire basketball career. He added that the demands of his position have come naturally to him.

“(Throughout), I would say (my job was) just making sure that all the other guys are doing what they need to do,” he said. “(I had to understand) that it’s my role that if guys don’t understand something, I need to get them in a position where they can succeed on the court.

“This is the first year that I have to do it all on a bigger stage,” Gioia added.

Gioia shed more light on the decisions and thought processes of the point guard position, giving an example of a typical possession.

“First thing you’ve got to really do is assess the defense and see what they’re doing, (whether they’re playing) zone or man,” he said. “It depends on whether we’re in a play or we’re not, but I just have to kind of start the offense, and then from there you do your best whether you’re passing, screening or even scoring to get a bucket.” 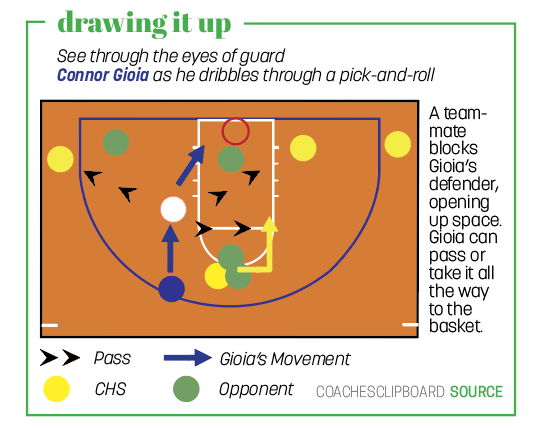 Jannsen’s role is slightly different. He said his main job is to stretch defenses with the threat of his shooting by standing beyond the 3-point line, opening up the middle for the scorers.

“Spacing is the number one thing (I do) for the team; others will do the creating. I try to get (guard and sophomore) Pete Suder the ball for his drives; he’s a really good player and he can do whatever he wants. By spacing the floor for everyone, I can get a kick-out to the corner and shoot a three,” he said.

Conley acknowledged Jannsen’s shooting prowess, but he also highlighted his continued efforts to diversify his game and further compensate for his height and frame.

Height issues notwithstanding, the guards also have to balance their on-court skills with the mental side of the game. Due to the Hounds’ inexperience this year, Conley said the leadership burden will continue to be on Jannsen, the only senior on the team.

“Jackson brings senior leadership, and he’s the only one who’s been in our program for four years. That’s a big deal because he’s been through it all,” Conley said.

Gioia, however, said he does not shy away from the leadership responsibility of his position either.

“It starts off the court. All of the little things like eat right, sleep right, get in the weight room, get stronger. On the court, it’s just communication, you have to know the guys, you have to talk to them and be a team, and that helps everybody become their best player.

“The point guard is known as a leader,” he added. “This year it’s going to be important for me to step up and be more vocal because we have such young guys; I need to take on that role more.”