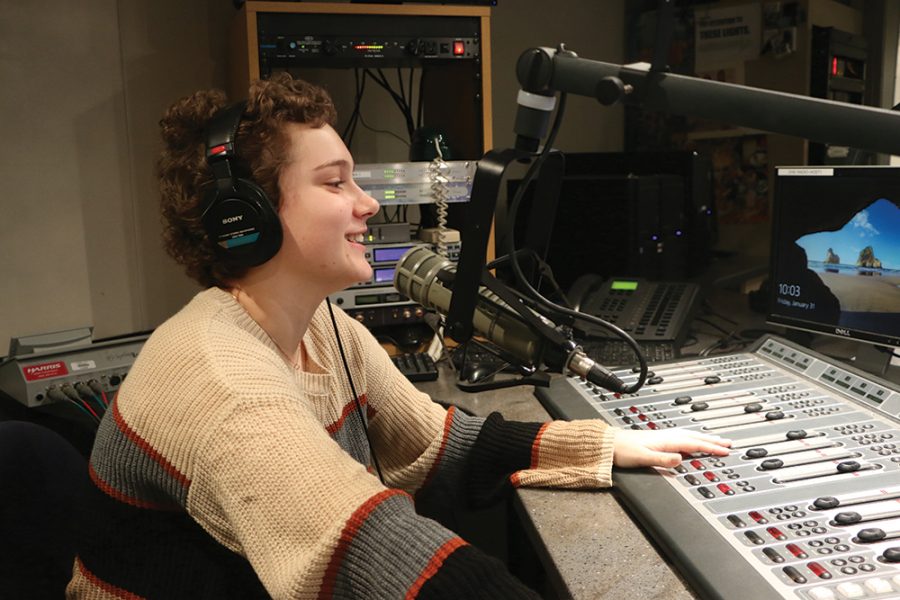 Jesse Cooper, WHJE staff member and junior, practices broadcasting for the Riley-a-Thon on WHJE radio. Cooper said she hopes the Riley-a-Thon will continue as an annual event even after her graduation.

During the week of Dance Marathon, this Sunday to  next Saturday, viewers can tune in to WHJE for the first ever Riley-a-Thon. During Riley-a-Thon, WHJE will help raise funds for Dance Marathon and Riley Children’s Hospital through special broadcasts where it will invite kids from Riley to tell their story on air.

Jesse Cooper, WHJE staff member and junior, will organize and oversee the event with the help of other students. Cooper said her inspiration for organizing this event was to give back to Riley, where she had received treatment for Hodgkin’s lymphoma last year.

“I spent six months at Riley constantly; I was always there and everything they did for me changed my life,” Cooper said. “I wouldn’t be here today without them. I really just wanted to dedicate my 2020 to raise awareness, raise money and just do things for the kids that are still there.”

Cooper said she had been thinking about the idea since coming back from summer break when she helped raise money for WHJE’s music festival, “Last Rock of Summer.”

She said, “Instead of raising money for WHJE, I thought, ‘why don’t we use our platform for a good cause and support such a great place that (CHS is) supporting?’” She said that experience helped her to do what she does now with Riley-a-Thon.

Cooper said her original goal was to raise $1,000, but that number has expanded. She said, “I’m hoping to exceed my expectations; I think we can get somewhere around $5,000.”

According to Chris Elmore, WHJE staff member and junior, Cooper raised $400 through presentations in the WHJE classroom alone through sharing stories.

Elmore said he has known Cooper since seventh grade and said her diagnosis last year was hard news for everyone who knew her. Without Riley, he said he wasn’t sure if she’d still be here.

“I don’t know what shape she’d be in and so I’m eternally grateful to Riley that they’ve helped her on the path that she’s on and she’s doing so well,” he said. Elmore said he will also help spread awareness for the Riley-a-Thon with the show he hosts,  “Elmore’s World.”

Cooper said she plans to host another Riley-a-Thon next year as a senior, but she said she is not sure about the future of Riley-a-Thon after that.

WHJE adviser Dominic James said he is sure it will continue during the 2020-2021 school year and possibly after that.

“We’re delighted that Jesse is well and is well enough to do these things,” he said. “But there are other students in the radio station who have also been to Riley and (it means a great deal to them, so I think (the show) will stick to them as well.”