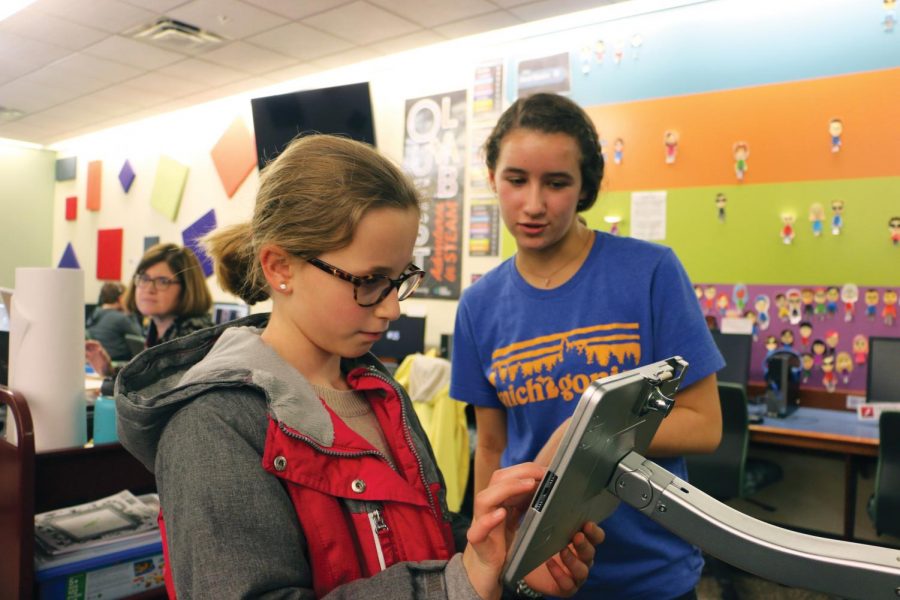 Ella Joliet, Teen Library Council member and sophomore, volunteers in the QUEST Lab at the CCPL. The library offers a variety of volunteering opportunities for teenagers.

Despite the common misconception that libraries are silent spaces for those who wish to solely read books, today’s libraries have transformed significantly to provide a wide array of services and resources for people of all ages. For students like Nicole Segaran, Teen Library Council (TLC) and senior, the Carmel Clay Public Library (CCPL) has been a vital part of her life, so the announcement of its renovation, which is currently underway, has had a significant impact on her.

“Libraries have worked hard to cultivate an atmosphere that can be versatile,” Segaran said. “It can either be a quiet place for studying and academics or be a fun community hangout place.”

The versatility Segaran mentioned is evident at the CCPL. In fact, according to a 2019 report released by the CCPL, the facility offered 1,869 academic and non-academic programs, ranging in target audience from children to senior citizens. 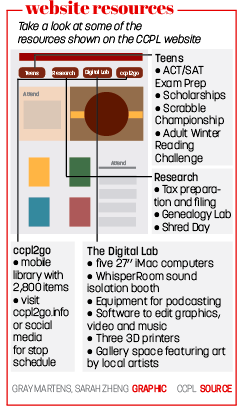 But regardless of the wide range of demographics, Jamie Beckman, young adult department manager, said the primary focus of the library is to target student needs specifically. In fact, the CCPL announced its renovation and expansion in 2019 to better serve Carmel’s growing needs by focusing on five key areas, one of which is the expansion of the teen space. Beckman said she attributes this to the lack of focus on the teenage demographic in the past, which has prompted an opposite reaction.

“When I was a kid, libraries failed to have teen departments,” Beckman said. “However, now, we are able to gear towards teens and assist them in their schooling career.”

A 2016 Pew Research Center survey found that while the percentages of people who use libraries for traditional activities like checking out books has dropped—from 73% in 2012 to 64% in 2016—other areas have expanded.

For example, according to the Pew Research Center, 27% of library users have attended classes or lectures at libraries in 2016,­ an increase from the 17% who did so in 2015.

Even at CHS, the media center has transformed to cater to the needs of its students through the offering of new programs or simply serving as a social space. For media specialist John Love, catering to students has always been the top priority.

“We pride ourselves in wanting to be a center of activity and to have students be excited to come to the library, whether for curricular or non-curricular reasons,” Love said. “Sometimes, we can have over 200 students during SRT, so I think it’s important to realize that the media center is trying to adapt to the needs of its students.”

Segaran said she especially encourages other students to utilize the library’s free academic services that are specifically geared toward students. 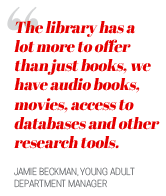 “I found a lot of resources that the library is unique to have, all at a free expense,” Segaran said. “You have free SAT practice tests you can take, and a bunch of other non-traditional things like tutoring that are of extreme help to students.”

“There’s still that curricular need for your traditional library, and I’m proud to say that we have a very healthy collection of these academic resources.” Love said.

But perhaps most significant is the CCPL’s opportunities for student volunteering and other community events.

For Ella Joliet, TLC member and sophomore, the library has provided a wide array of opportunities to get involved in the community via the student organization Teen Library Council.

“TLC is an organization made up of Carmel teenagers from eighth grade to seniors and we plan as well as attend events or programs at the library,” Joliet said. “In a sense, we just try to get everyone involved in the community because the library offers so much more than just books or things like that. But in more traditional ways, we recommend books and spread awareness among students.”

According to Beckman, the focus on teen leadership provides benefits for not only the students themselves, but also the library, showcasing a symbiotic relationship.

“For students, it helps them hone skills for college and life, and for libraries we can get better feedback and better serve their needs based on the leadership’s suggestions.” Beckman said.

Overall, Beckman, Segaran and Joliet all said libraries are being underutilized by the target demographic despite the many different services and programs offered for those targets.

“The library has a lot more to offer than just books; we have audio books, movies, access to databases and other research tools,” Beckman said.

Joliet said, “Libraries have a purpose more than a space just for people who wish to study. It offers so many other things that are inclusive and benefit everyone like volunteering.”

The sense of community and opportunities gained from simply using the resources offered at the CCPL led Segaran to reflect on its importance in her life as her high school career comes to an end.

“The place I will miss most is the library; the people I’ve met and worked with have become some of my closest friends,” Segaran said. “It’s a great place with so many different opportunities for different focuses, so take advantage of that.”