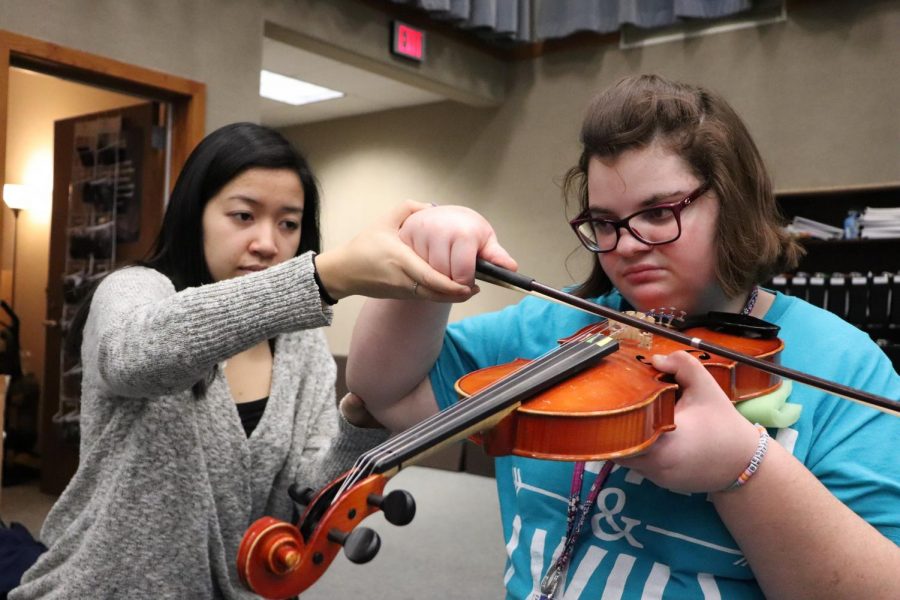 The information in this issue—originally scheduled for publication on March 20—was written and produced prior to news regarding school cancellation from the COVID-19 virus. Some information may be outdated or inaccurate as a result. Student staff members worked hard to produce this content and, despite the circumstances, we still wanted readers to have an opportunity to see it. Thank you for your readership.

Like most students her age, senior Maddy Paxton has a busy schedule. On Mondays after school, she rehearses with United Sound, confidently playing the violin among her fellow new musicians and mentors. Last fall, Maddy participated on the Unified Cheer team. In the winter, it was Unified Bocce Ball. Now in the spring, in addition to United Sound, Paxton will earn another varsity letter as she participates in her fourth Unified Track season, which began earlier this month. 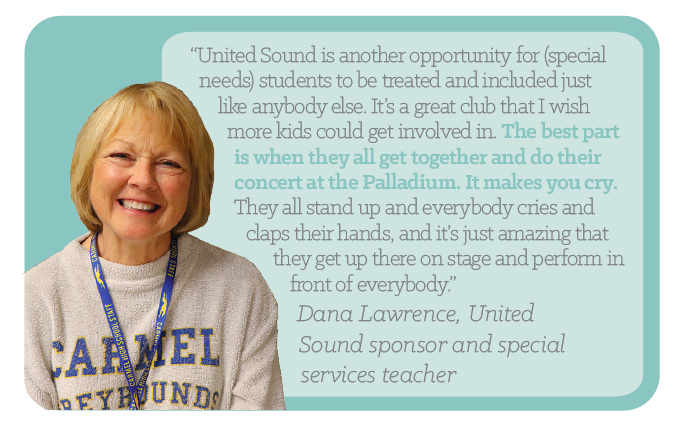 In a school the size of this one, it can be easy for students like Maddy—who is on the autism spectrum—to feel lost in the crowd. The culture at many high schools in this country often inhibits students with special needs from getting involved across a wide variety of extracurricular activities like other students without disabilities can. However, with the establishment and growth of more inclusive programs, strides toward inclusivity at this school have allowed students like Maddy to get involved with activities that most students with disabilities at other schools dream of doing.

Maddy explained what she liked about these programs. 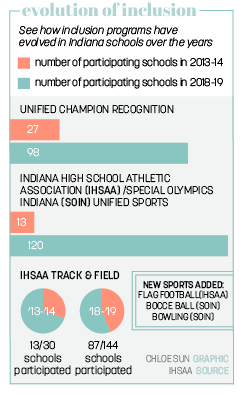 A prime example of this inclusion, Champions Together, was one of the first steps toward an “inclusion revolution” in schools across the state. Champions Together was established in 2012 as a partnership between the IHSAA and Special Olympics (SO) Indiana. According to SO Indiana, the program started as a response to a challenge given to a group of 18 student athletes known as the student advisory committee by the IHSAA commissioner, Bobby Cox. He encouraged the student advisory committee to engage in “servant leadership” in order to give back to their schools and communities.

Tasked with spreading the word about the program in 2013, Lee Lonzo, former CHS athletics director and assistant principal and now director of Champions Together, said he knew CHS would be the school where the program started.

“When I got this job, nobody knew what they were talking about because it was so brand new. My biggest job was to get the word out as to what (Champions Together) was about—get people interested. I did that by traveling all over the state,” he said. “The first stop I made was my former place of employment for 34 years. I had been athletic director when (Bruce) Wolf was assistant athletics director (he still is), so that was the first call I made. (CHS) was the first school I went to, and they were all in from the beginning.”

Athletics programs are not the only way this school has become more inclusive; programs such as United Sound, a club where students with disabilities learn how to play instruments through peer mentorship, have grown in recent years, too.

Riya Verma, United Sound president and senior, said although in the past the club has been mostly driven by orchestra director Margaret Hite, they now have added new officer positions  to facilitate new activities so members can get closer to one another.

She said, “Every week, when we have our meetings, (Carol You, activity coordinator and junior,) plans a new game so that we all learn each others’ names and learn about each other.”

Angela Paxton, Maddy’s mother, said she has appreciated the initiative CHS has taken in growing these inclusivity programs. For example, Mrs. Paxton said since the beginning of Champions Together, CHS administrators and students have been receptive to the program’s mission to expand opportunities to all students, regardless of intellectual and athletic capabilities.

“Carmel is the leader in the state for Unified sports. The athletics department—especially (Wolf)—really supports these programs,” she said. “They readily accept the invitation to try new sports and to expand the program as a whole. We’re lucky in that we have the resources to do it, but it also takes the desire to organize, to recruit coaches who want to do it, and to promote it as a sustainable program moving forward. But it also really comes down to the students. They have to want to be a part of it. And they show up in large numbers, with great spirit, tons of patience and a desire to win and to share it all with our athletes.”

Elizabeth Price, president of Champions Together at this school, Special Olympics of North America Youth Ambassador, peer and junior, is one student who has helped expand these programs at CHS.

“I got really involved with Champions Together and went to all of the clinics (and) volunteered as much as I could,” Price said. “I just fell in love with it, and I wanted to become president (of the club).”

She said Champions Together has been working toward creating new athletic events which  has led to better awareness and expansion.

Price said, “We are definitely making strides toward a more inclusive school environment. We have had all of our clinics this year really boom in attendance and we had a very successful basketball clinic at the beginning of January. In past years, we have only had two or three athletes attend these clinics; now we have 20 to 30 at our clinics. People are wanting to get involved now. You see a lot of inclusion and happiness—people just being themselves without being embarrassed.”

Lonzo also said he saw benefits to the implementations of these programs on the state level.

“If you are a kid with disabilities, and you’re in the cafeteria for lunch, you probably have people making fun of you,” he said. “After you start this program, they are on the same team. I’m talking about the cool kids, the football players, the cheerleaders, the soccer players. These kids thought it might have been good nature to give students with disabilities a hard time, but it was bullying.

“In so many schools, the kids with disabilities sit at a table by themselves, and now you walk in and see them sitting next to their teammates that are on the Unified Track team or the Unified Flag Football team,” Lonzo added. “The principals notice that and say it makes their buildings a better place to be in. There’s less bullying and less harassment. There are fewer fights. There are happier kids. It was a tipping point that we needed to reach. The CEO and president of Special Olympics told me that in the beginning of organizing this, it would feel like pushing a cart up a hill, which it did. He told me that you were going to get to the top of the hill and get to a point where I was going to be chasing after it, which is how I feel now.”

But the inclusion revolution hasn’t just impacted CHS. According to Lonzo, Champions Together and Unified programs have continued to gain traction across Indiana as other schools hear about the positive impact inclusive programs for special needs have.

“I got an email from the athletics director up in Fort Wayne, for example. They haven’t done a thing with (Unified Sports) in the past, and now they want to join in. The more schools hear about it, the more schools want to do it,” Lonzo said. “They’ve heard how wonderful it is. I speak to administrators all over the state all the time, and they tell me how much it has changed the culture of their building and makes it far more inclusive.”

Verma said she has seen a similar effect on the school.

On an individual level, Mrs. Paxton said she has also seen Maddy grow through these programs.

“Maddy has grown up and excelled, both in school and in the sports, because of the inclusivity of the activities. Her best friends have come from Unified sports. When she started at CHS, (Maddy) was a kid who struggled to interact with others and suffered major anxiety. Getting her into Unified sports, as well as the United Sound program with the orchestra, gave her daily opportunities to practice, compete and play alongside other students, and the friendships that grew out of that time together have been the most lasting and rewarding relationships she’s ever had.

“As for competing, she loves to hear the crowd cheer and enjoys when her teams do well,” Mrs. Paxton added. “And as much as it has helped Maddy grow and gain friendships, it’s helped us, her parents, because we get to see her active, happy and social. Maddy’s growth and confidence overall are directly related to her day-to-day experiences in all of the Unified and United programs. These programs are what we will miss the most when she graduates.”

When asked what made her happy, Maddy also said these programs and the friends that she has made through them truly make her high school years enjoyable.