As sports events, races are canceled, postponed due to COVID-19, students find new ways to stay in shape, compete 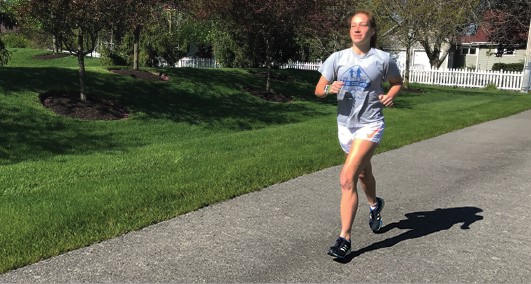 SOLO JOG: Junior Yael Kiser runs on her own on May 2, the original scheduled date for the Indy Mini Marathon. Kiser was originally registered to run the Mini Marathon but chose to transfer her registration to next year. She said she preferred the environment of the in-person race.

Across the country, a multitude of events are being canceled due to COVID-19. This includes previously scheduled sports events, such as the Indy Mini Marathon. The Indy Mini is one of the largest half-marathons in the country and was originally scheduled for May 2. However, due to COVID-19, new options had to be explored for the race to happen. Like many races nationally, organizers chose to make the half-marathon a virtual event for this year. This year, according to Kathleen Messmer, communications intern for the OneAmerica 500 Festival, participants must complete their race and submit their results anytime before June 30, 2020.
Messmer described the many considerations taken into account before choosing to make the Mini virtual.
“We explored countless options– from a different date, to a different venue. We arrived at the conclusion that we wouldn’t be able to provide the Indy Mini experience that participants have come to expect over the last 43 years,” Messmer said via email. “We were mindful of the resources required to help us produce an event of our size, including thousands of volunteers, medical personnel, Indianapolis Metropolitan Police Department (IMPD), the Indiana National Guard, Homeland Security, Indianapolis Motor Speedway staff, corporate partners and many others. Given the current situation that we all find ourselves in as we deal with the COVID-19 pandemic and out of respect for the ever-changing needs of those resource partners as well as the health and safety of our participants, it (became) clear that rescheduling wasn’t an option and moving our 2020 races to virtual runs was the best possible choice. At this time, there are just so many unknowns as it relates to resources and the needs that are facing them.”
But Messmer said the option to race virtually is not for every athlete. With that in mind, she said the 500 Festival offered participants the option to participate in the virtual race or defer their registration for next year’s race.
Junior Haley Slosman chose to run the virtual race, while junior Yael Kiser transferred her registration to next year. Slosman said although she chose to run the virtual race, she doesn’t think that the online race will compare to the regular race experience.

“I like that they (had) the option to do the virtual races now with everything going on, but they don’t really compare to regular races,” Slosman said. “In a regular race, you would run with a bunch of other people and be able to run a course that the organization has set up. In a virtual race, you make your own course and set your own date that you want to complete it. You also run it alone and not with thousands of other people.”
For this reason, Kiser said she chose not to participate in the virtual version of the Mini Marathon.
Kiser said, “What I like about the Mini is that there’s so many people around you cheering and running with you, so there’s a lot to distract your mind during a long race like that. When I’m running by myself, it can start to get boring and it’s just not as fun as being with all those people, so I thought I could just wait until next year to do it.”
According to Messmer, the 500 Festival has offered a virtual option for the Mini Marathon in previous years for participants who could no longer make it to the race. However, this was the first time that the Mini Marathon became a completely virtual race. Messmer described the logistics changes that took place for the virtual race to happen this year on such a larger scale.

“Many of the in-person features of our race (were) converted into the digital world,” Messmer said. “OneAmerica 500 Festival Mini-Marathon, Delta Dental 500 Festival 5K and Mega Mini Challenge participants are free to complete their races (at) any time from any place. Once they’re registered, they can visit our resources page to customize their bibs and find other ways that they can make their virtual (race) feel as much like the in-person (race) as possible.”
Messmer said organizers encourage all participants to complete their race solo and practice social distancing when running or walking in public areas. This summer, she said, participants will be shipped their participant shirt, finisher medal and OneAmerica participant hat, among other “goodies.”
Messmer added that one other difference between the regular and virtual race would be the timing results, which would not be counted as official times this year.
“Our virtual race is not regulated by a timing or scoring company, therefore the results will not be official or validated,” Messmer said. “Many participants have shifted their focus on running or walking for a cause or goal rather than for their time. Participants record their own time for their virtual race, usually through a fitness tracker or running app.”
Slosman described how she would be getting her timing results.
“I think I would definitely run faster if I were with other people, but I have my own watch that I can track my time on, so it doesn’t really change the timing results,” Slosman said.
As more and more races turn virtual, Kiser said she would consider running a virtual race in the future.
Kiser said, “I would do a virtual race if it was shorter, so I’m just not running as high of mileage as I would be for the Mini.” 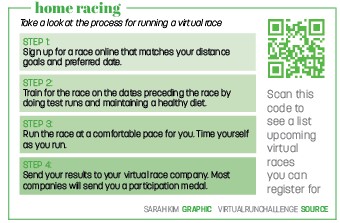