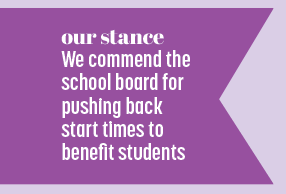 On May 18, the Carmel Clay Schools (CCS) school board passed the resolution to move CHS and all CCS middle school start times from 7:50 a.m. to 8:45 a.m.. The school day will end at 3:45 p.m. instead of 3:05 p.m. As numerous studies have shown, later start times are associated with several benefits, including improved grades, and fewer car accidents and absences. As a result, the HiLite staff fully commends the district for its decision to implement these changes to the school day.
In the current school system, most students are unable to balance their workload and extracurriculars while still getting enough sleep. In fact, a survey conducted in 2017 by the CDC found only two in five high-school-aged adolescents reported sleeping the recommended eight hours each night. On the other hand, in school districts with 8:30 a.m. start times and later, two-thirds of students reported getting eight hours. With the board deciding to pass the resolution to move start times later, more students can get the necessary hours of sleep per night.
That extra time students have for sleep comes with a plethora of benefits. It has been proven later start times also improve students’ academic performance and attendance. An experiment conducted by Seattle Public Schools alongside the University of Washington found moving start times from 7:50 a.m. to 8:45 a.m. improved students’ grades by 4.5% and noted that tardies and absences during the trial period of eight months decreased by 44%.
This report highlights a direct correlation between start times, attendance and academic performance. When school starts later, adjustments allow students to wake up well-rested, decreasing the amount of students who arrive late or don’t attend school.
According to Superintendent Michael Beresford, the board’s decision to pass these changes stems from the decreased rates of adolescent depression, anxiety, obesity, and drug and alcohol use associated with later start times.
The National Sleep Foundation supports this, reporting in 2016 that districts with start times 8:30 a.m. and later saw a 23% decrease in automobile accidents among students. Additionally, they found teenage depression rates were 2.9 times lower in districts with later start times than neighboring districts. According to the Institute of Mental Health, adolescent depression rates are currently at an all time high. We commend the district on its efforts to decrease these rates among teenagers.
Due to improvements later start times bring to students’ overall well-being according to research studies, the HiLite staff commends the district’s decision to push start times later during the day for CHS students.