Colleges should reconsider the use of standardized tests, go test-optional for admissions 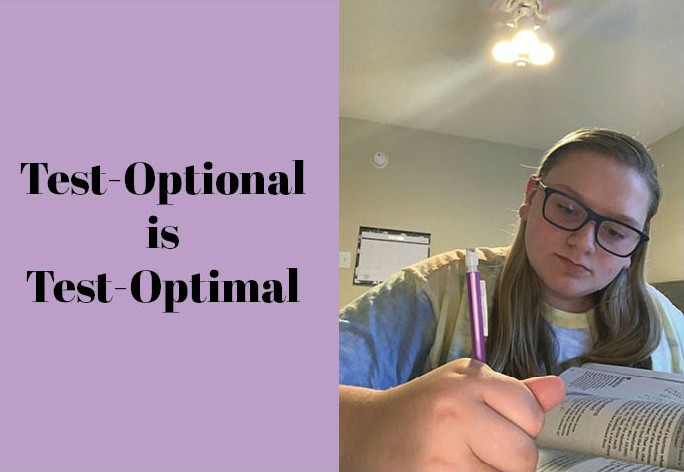 Whenever I think about the junior year of high school, I think about the stress of taking the SAT, ACT or other standardized tests. I picture stressed out students trying to balance studying for these tests, heavy course loads, extracurriculars and many other responsibilities that come with high school, leaving very little time to take care of themselves. However, due to COVID-19 canceling most spring SAT and ACT tests, most colleges have gone test-optional because many members of the class of 2021 were unable to take them. This has relieved many of the stress that comes with it, giving students more time for themselves. With the stress standardized tests cause high schoolers, colleges should become permanently test-optional to give more students time for themselves.

I’ve always heard junior year is the hardest, in part due to balancing studying for the standardized tests in addition to the challenging course load students take. With the stress increase, students have lost sleep, sometimes getting only a couple hours of sleep a night. According to the National Institute of Sleep, this is a universal occurrence. A 2019 study they conducted found that high school students reported an hour and a five minute decrease in hours slept per night from their first semester to the second semester. This decrease is due in part to studying for standardized tests. If colleges were to go test-optional, students would have more time to sleep, possibly even allowing sleep schedules to increase by an hour and five minutes.

While it would be ideal if colleges could completely eliminate standardized tests, this would take time. Additionally, some students still may want to take tests to strengthen their applications. However, for others, these standardized tests just mean more studying and another chore to complete. Going test optional could meet the demands of both parties. This way, students could choose if they want to take standardized tests and decide for themselves if they are something worth the time and energy.

In addition to the stress students feel to do well on standardized tests to prove themselves to college admission officers, these tests often come with the stigma that they determine your intelligence as a person. However, recent studies have found otherwise. A 2018 PBS study recently found no correlation between high schoolers aged 14-18’s ACT test scores and their respective IQs. A reason for this is that these tests can be taken multiple times and has become a capitalized industry. Now, there are many premium tutoring options as well as having the opportunity to take the tests many times. Additionally, many students get nervous taking tests, and as a result might get a score that doesn’t match their actual intelligence. With so many factors going into one’s final standardized test score, they have become inaccurate ways to measure intelligence and should become optional for students.

With more colleges than ever going test-optional for the next year of college applicants, all colleges should consider discontinuing the use of standardized tests or going permanently test-optional. This way,  students can have a better work-life balance and aren’t weighed down by a single score.