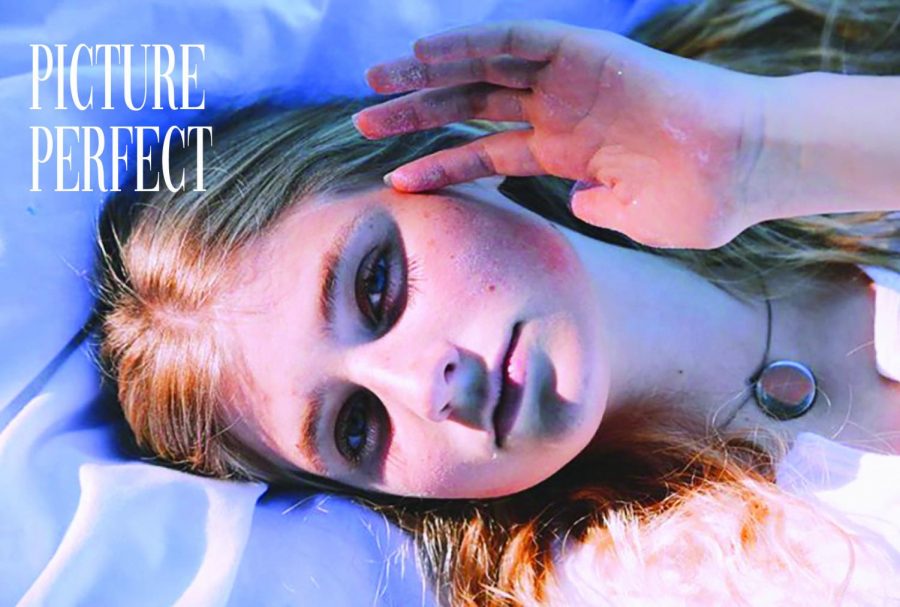 Like many teenagers in today’s generation, senior Chloe Eades frequently interacts with social media. Eades, however, has taken a step further: conducting photoshoots for her and her friends’ social media with her own vision in mind.

Eades said compared to professional photoshoots, she appreciates the lighthearted aspects of designing her own photoshoots.

“I’m not going to lie if I was doing an actual photoshoot, I’d probably feel so weird because I am in no way a model and I don’t really know what I’m doing,” Eades said. “I think when you (do a photoshoot) with your friends, you’re all doing something fun, and taking pictures can be really nice to just remember the moment.”

Eades isn’t the only one who was inspired by others to branch into casual photoshoots.

Sophomore Tatum Siebert said the growing popularity and regularity of solo photos on social media platforms ultimately led Siebert on a path of self-expression exploration. Click here to read a story by Emily Carlisle about how students use photography as self-expression.

“A lot of my friends were (taking photos of just themselves) and so I was like ‘Oh, this is a cool way to interact with other people and try fun outfits,’” Siebert said.

Contemporary portrait photographer Kim Beesley of Kim Beesley Photography said the simple act of participating in a well thought out photoshoot can make people’s confidence rise. She said the pure experience of focusing on just oneself is very different than usual experiences.

“Normally, my clients are very happy,” Beesley said. “The comments they make won’t be about them, they’ll be about the experience or (similar to) ‘I had such a fun day doing this.’”

Eades said she agreed with Beesley.

“I think it can be a really negative place but it can also be really awesome too to just empower people,” Eades said. “I just think it’s cool to be creative and be you and take pictures of what makes you happy or with people that make you happy.”

According to a recent study conducted by Florida House Experience Health, 87% of women and 65% of men compare their appearances to images they see from social media.

Yet despite all the ways social media can warp individuals to turn on themselves and their passions, there’s been an uprising of self-love influencers who aim to make people of different appearances and lifestyles feel seen in the media. Many of these influencers such as Ashley Graham, plus-size model and body positivity advocate, and model and vitiligo spokesperson Winnie Harlow, not fitting under some of the societal expectations of appearance, use their platform to post solo photos to empower others to accept themselves for who they are.

Eades said while there is both an influx of self-acceptance encouragement and feeling a need to conform on social media, she feels little pressure to maintain a certain image.

For Seibert, she said while social media can often aim unrealistic, unattainable standards of beauty towards teenage girls, it is important to have a strong enough mindset so that external perceptions of one’s photos do not bug him or make him feel differently about himself.

“I feel like there’s a lot of different expectations for a teenager, especially for a woman, of a specific way to look”, she said. “But, I’m trying to realize that as long as you’re happy in who you are as a person then, it doesn’t really matter what people think of your looks. It more matters what they think of your character.”

Still, Siebert said posting a photo can help her focus on the now and how she is feeling in the current moment.

“Sometimes, when I see myself in the mirror, I tend to pick apart how I look,” she said. “But, if I just take one photo and think ‘Oh, you know what, I look good today. I’m confident in how I look,’ (I realize) I’m more than the sum of my parts and I feel more mentally at peace.”

Beesley said she takes the responsibility to alleviate pressure from embodying a certain image from someone else when clients initially come to her for photoshoot ideas.

“(As a photographer), I do not feel pressure at all adhering to anything on social media because the way I shoot is very different,” she said. “I feel like the clients feel pressure because they see something and they feel like they need to look this way. But, at the same time, that’s not really who they are, so my job is to customize the shoot for them.”

Siebert said the universal notion that social media does not reveal all corners of one’s life helps to alleviate the stress of keeping up an image.

“If someone doesn’t know me and they see my Instagram, it’s like ‘Oh, this is the only thing that they know about me,’” she said. “Then, I want it to be picture-perfect, but it doesn’t have to be perfect. I mean, Instagram is just a highlight reel of our lives.”

Eades said she likes photoshoots because the artistic expression one builds on one’s own can make for positive experiences and connections with others.

Eades said another aspect of solo photoshoots is the versatility it has to fit one’s specific needs.

“(The photoshoot) doesn’t have to be anything crazy fancy or planned. It can be anything. I try to show the happy side of everything which is me,” she said.

“A lot of the time, I get good feedback from my friends (on my photos),” she said. “They say ‘Oh, you look so pretty!’ and those kinds of things just make me smile.”

Eades said her solo shots add to her overall social media image that aims to represent all aspects of her life and persona.

Siebert said through her choice of content on social media, she wants to express how important self-love is.

Eades said, despite the fun behind designing a photoshoot for yourself, the process is not a perfect confidence booster for everyone.

“If somebody struggles with self-confidence, (a photoshoot) could go either way,” she said. “I think taking pictures as your normal self and just being who you are can be the best outcome for taking pictures.”

On the other hand, Siebert said she disagrees. She said with the right circumstances, a photoshoot outweighs the insecurities one might have about their appearance.

“I recommend having a photoshoot done for someone who may struggle with self-confidence if they have a good support group around them who will want to make sure that they feel good in their own body,” she said.

Eades said she likes photoshoots because of the pure fun behind them.

“I don’t know if I would call doing a photoshoot an act of self-care,” she said. “I definitely associate it with being really fun to do and it makes me really happy.”

Beesley said the underlying tensions about appearance can melt with appropriate photoshoot environments and subjects have the opportunity to see themselves in a different light.

“75% of the clients I photograph are women that, first of all, do not have pictures of themselves with their families or with their children because they’re kind of in a different stage in their life. They don’t put themselves first; they feel like they need to lose twenty pounds,” Beesley said. “They don’t want to be in a photo with their family because they don’t like the way they look. When they actually see the finished photos, I feel like the clients kind of see themselves the way everyone else sees them. There is a huge transformation in them feeling great about themselves. They are proud to show a photo of themselves.”