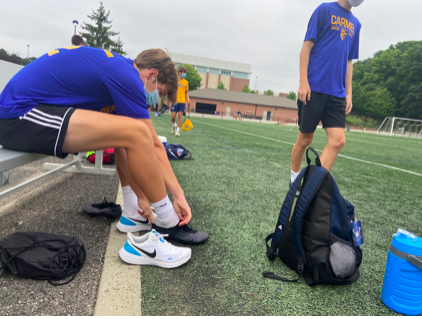 Ever since the pandemic struck, multiple sports clubs, teams, championships, and games have been postponed or stopped altogether; however, sports teams are starting to make a comeback and playing just as well as they used to, if not better. The men’s varsity soccer team is an example of that.

For Chase Havice, men’s varsity soccer player and junior, the pandemic temporarily halted his soccer games at the beginning of the year, but now he said not much has changed from when practices were normal.

“Not much has changed, (we) just have to wear masks more,” Havice said. “We have a really good team this year.”

Interim head coach Felix Yau also said he has been seeing a positive comeback despite the delays and cancelations in practices.

“I think that we are doing pretty well considering all of the restrictions with preseason and the cancelation of everyone’s club season,” Yau said via email. “All of the boys have worked hard this high school season and have done a great job maximizing our training sessions.”

On Sep. 15, members of the men’s varsity soccer team will play against North Central, and despite North Central being this school’s biggest rival Yau said he believes his team is ready for the challenge.

“North Central is our biggest rival in soccer and has been forever,” Yau said via email. “Our boys are ready and have been working hard during training leading up to this game.”