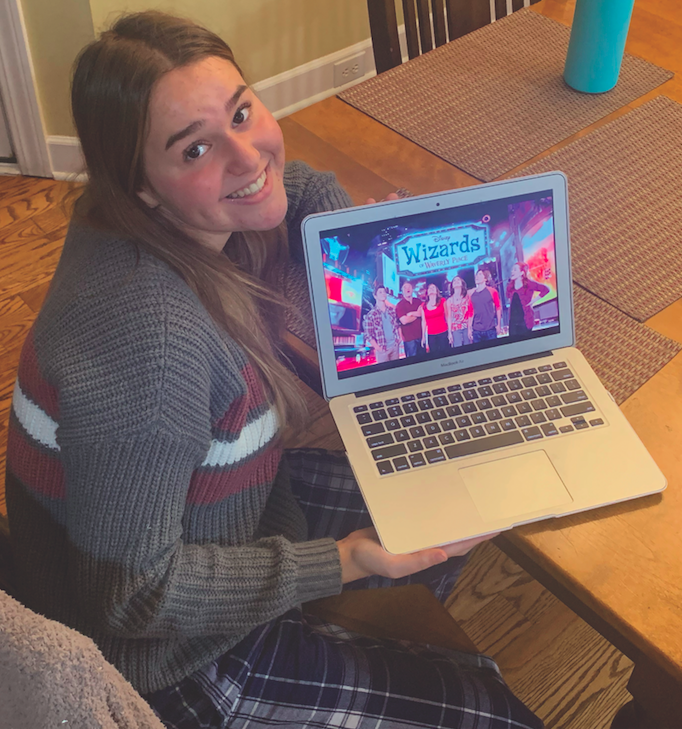 Junior Madeline Blank smiles as she rewatches old episodes of Wizards of Waverly Place on Disney+. With the renewal of old shows, many teenagers are revisiting their childhood in nostalgic remembrance of their favorite shows.

If you have been on TikTok recently you have likely seen trends surrounding 2000s TV shows such as “Clone High” and “Avatar: The Last Airbender.” These shows have been gaining popularity for a variety of reasons, one being the nostalgia they bring to people who watch them. Senior Madeline Blank said that Disney+, in particular has a lot of shows that make her nostalgic.

Blank said, “I have been able to go back and rewatch the shows I loved as a kid. I have watched a lot of ‘Wizards of Waverly Place’ and ‘Hannah Montana’, which makes me so happy.”

Junior Will Atteberry said he too felt a sense of nostalgia watching certain shows.

He said via email, “Any show that was on Disney or Cartoon Network in the early 2000s, especially shows like ‘Regular Show’ and ‘Suite Life On Deck’ and also a lot of (Disney Channel original movies) like ‘Teen Beach Movie’ bring me loads of nostalgia.”

IB Film teacher Jim Peterson said that he thinks the pandemic has been a large factor in the resurgence of media.

Peterson said via email, “Many are wanting to recapture the time before COVID. Depending on your age, you might want to go back to watch shows/films from your childhood to recapture that innocence.”

Social media platforms have also boosted the popularity of certain shows. Blank said the reason she began watching MTV’s 2002 show “Clone High” was because she saw so many videos using audio clips from the show.

Blank said, “I am a huge fan of ‘Clone High’, but I only found out about it through TikTok videos.”

Reboots are a third factor that may affect certain show’s popularity.

Blank said, “I think that what started (‘Clone High’s) rise to popularity now is the reboot that was announced. ”

However, Peterson said reboots, aren’t always the way to go.

Peterson said, “I think the industry is getting lazy and afraid of failure. There is a lot of risk in producing new media. It’s easier to go back to what has been successful in the past and assume that it will be successful again.”

Still, reboot or not, according to Attenberry, the nostalgia and joy brought to the people watching can be worth it.

Atteberry said, “Nostalgia can be one of the most powerful emotions especially with tv and music. (It) can totally teleport you to an exact moment in your past, and it’s a wonderful feeling.”