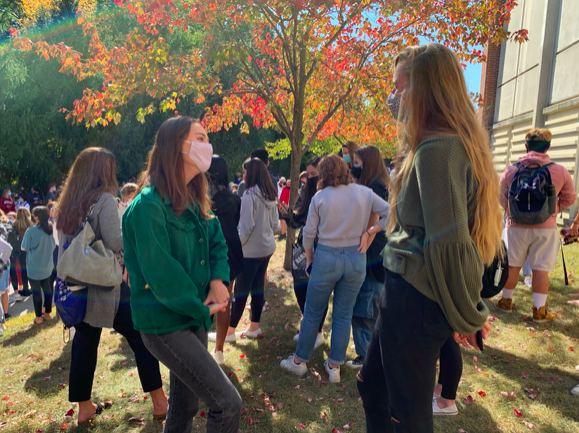 Student body president Julia Heath talks to a friend while waiting outside after the fire alarms went off on Oct. 7. She said she is excited to celebrate the hard work of the administration and bus staff this week and next week.

According to Principal Tom Harmas, his biggest concern right now is figuring out the details for second semester.

He said administration recently sent out a survey to parents, asking them to communicate each student’s desired learning option for next semester by Oct. 19. Just like for first semester, the two options available are hybrid and all-virtual.

Harmas said he is glad that CHS plans to continue providing some in-person instruction next semester because he believes that live student-teacher interaction is valuable. He said this is possible because so far, there is no indication, based on contact-tracing, of COVID-19 cases transmitted during the school day at this school.

Harmas said once parents have responded to the survey, administration will start working on creating second-semester schedules and other specific plans.

He said, “Depending on the number of kids who come back from virtual or the number of kids that leave to go to virtual—which I don’t think will be many—then our schedulers will have to look at all that information and change some of those schedules. For example, let’s say I’m teaching an AP English class virtually but I’m also teaching regular classes here. If a bunch of those AP kids come back and I don’t need a virtual class anymore, (then) we will have to change all those kids from virtual to in-person and reschedule all those kids in those classes.”

Harmas said the school is asking for the learning plan information three months in advance so that the planning process won’t be as rushed as it was before first semester.

Student body president Julia Heath said she appreciates the hard work the CHS staff has put in to make this school year possible. To commemorate this hard work, she said she worked with the rest of the Senate to make posters and deliver cupcakes to administration for Administrative Staff Recognition Week from Oct. 12 to Oct. 16. Additionally, she said for Bus Driver, Bus Monitors and Bus Mechanics Recognition Week, which is from Oct. 19 to Oct. 23, she is leaving school a little early with some of the other Senate members to go around to each bus and hand the driver a note and a cookie.

Harmas said that in addition to working on second semester, administration is also creating more concrete plans for finals week. He said that due to time constraints, there most likely will not be office hours this year as cutting the day short will make students lose out on academic time. He also said that not all classes will have finals this year and whether a class has a final—and the format of that final—will be decided on a class-by-class or departmental basis. In particular, he said that he is encouraging teachers to adopt non-traditional types of finals this year and move away from just a multiple-choice test.

“We keep on talking to teachers about more authentic types of finals. Sitting down and filling in bubbles is not really as authentic as you can get,” Harmas said. “But if I take all the information that I’ve learned during the year and write an essay and back that up with claims and evidence, that’s probably a better judgment of your understanding of the material. While memorization has its place, I think the job of education is to socialize but also to grow learners and thinkers because when you walk out of the class and you can’t remember any material but you got an A on the test, I’m not sure that’s a successful class.”