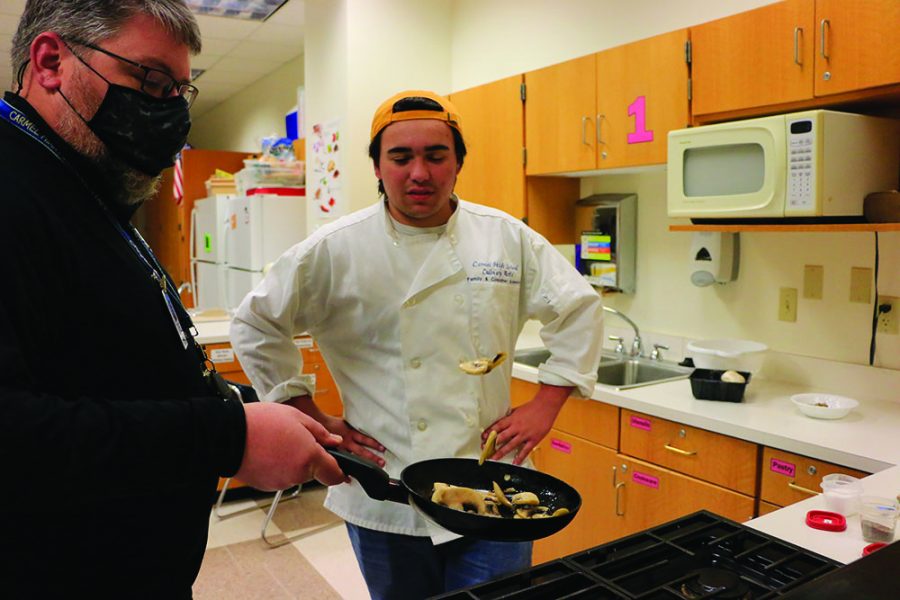 Cooking teacher Nicholas Carter demonstrates how to toss mushrooms to senior Matt Arnold. He tells Arnold to have confidence in cooking.

Every first Thursday of November, the United States recognizes something called National Men Make Dinner Day. This year, it will take place on Nov. 5.

Sophomore Arthur Yeh, who is a student in Advanced Nutrition and Wellness: Baking, cooks every other Gold Day. He said baking is something he enjoys.

“Baking is one of my favorite classes. At the end of the day when you need to unwind, it’s fun to create something with your own hands with help. While the finished product might not always look nice, it always tastes nice,” he said.

Yeh also said the reason he started baking was because he tasted something someone made during a baking class in his freshman year. He said he wanted the satisfaction of making something like that with his own hands.

Senior Matthew Arnold said he too enjoys cooking. Arnold, currently enrolled in Culinary 3-4, said, “I’ve done some volunteer things, and I cook for family. I do it a lot because I enjoy doing it. And also there’s always a rewarding feeling of making something that others can enjoy and appreciate.”

Still, while Yeh and Arnold are in a largely female-dominated class, they both said they don’t feel any sort of gender bias. Arnold said because he is in an advanced cooking class, he knows most of the people from when he took his first culinary arts class during his freshman year. Yeh said that the teacher treated everyone the same and did not hover around the boys under the assumption that they did not know how to cook.

A study from Pew Research Center published as recently as 2016, indicates that in homes, cooking and grocery shopping is a chore that is still female-dominated household chores, although the number of males that are now starting to cook is slowly increasing. According to the study, in homes with a child, the women do 80% of grocery shopping and cooking. In houses without kids, the women do 63% of the cooking and grocery shopping. But, further studies by the Nutrition Journal found that the percentage of men cooking at home increased significantly from 37.9% in 2003 to 51.3% in 2016.

According to Stephen Cassidy, who teaches all the cooking classesand a baking class, he was never bullied for choosing cooking as a profession and Yeh and Arnold have echoed these sentiments.

Arnold said, “I feel like at least baseline cooking skills and culinary skills, especially learning it at the high school level, is something that can be useful for the rest of your life.”

But, on the flip side of the gender conversation, the number of women in home kitchens is larger than the men. The amount of men in a professional kitchen has always been significantly larger than the number of women. The Bureau of Labor Statistics states that 77% of all chefs and head cooks are men, making them the dominating gender in this occupation, whereas the percentage of women occupying these positions is 23.9%.  Regardless of existing stereotypes, the male chefs and head cooks have dominated positions of authority in the kitchen for a long time.

“I’m sure there’s gender bias with people not seeing women as leaders as much,” Yeh said. “I think it’s a combination of what people expect of men and women respectively and general trends of how they actually function in these positions.”

Arnold said he believed another reason why women were not given as many authority positions in restaurants was because women were more likely to take time off from working toward an executive position in favor of starting or looking after family. Senior Isabel Ros, who said she wants to own a restaurant, agrees. Still, Ros said that while going the family route as a female would give her a disadvantage and affect the time it would take to reach an executive position, she would work hard to get there.

Ros, who was inspired by her grandmothers to cook, said that she is preparing herself extremely well in order to be able to defend her position as a person of authority in a restaurant. Ros said that she will focus on refining her skills to the point that it will not be questioned in comparison against a male chef, and so she can stand on her own abilities as a cook.

Gender discrimination and specific gender roles are still an ingrained part of society today. According to a study by CNN from Feb. 26, adults are known to perpetuate traditional gender roles and ability of certain genders in performing certain tasks, which demotivates the opposite gender in performing the same. This can also be seen in the culinary industry, as women are expected to be homemakers, and men in this industry have to reach the highest pinnacle of their career to be deemed successful. But Cassidy said females are slowly getting to executive positions as well.

“Professionally, the culinary industry is a male-dominated profession, even with that stereotype as being kind of a female thing,” Cassidy said. “I think there is a paradigm shift, with more females becoming executive chefs and head cooks and resort owners, bringing it up to a 50:50 (ratio of males to females in an executive position).”

Gender issue aside, cooking is something that Yeh, Arnold and Cassidy all said they believe to be something necessary for a good life.

Cassidy said, “Cooking is definitely a very necessary skill. Being able to know your way around a kitchen is very important, especially getting older, budget-wise, it’s a lot cheaper to cook at home and eat at home vs going out to eat all the time, you get to be in your college age and out on your own. It’s also a great skill to have that’s impressive to other people…it teaches you a lot of things…you don’t just learn how to cook, it teaches you a lot of transferable skills.”

As the years go by, according to Cassidy, gender stereotypes are slowly beginning to fade. Cassidy said, “In this day and age and with how the food network is and how everybody is savvy with cooking, I wouldn’t consider it a feminine thing anymore to cook.”