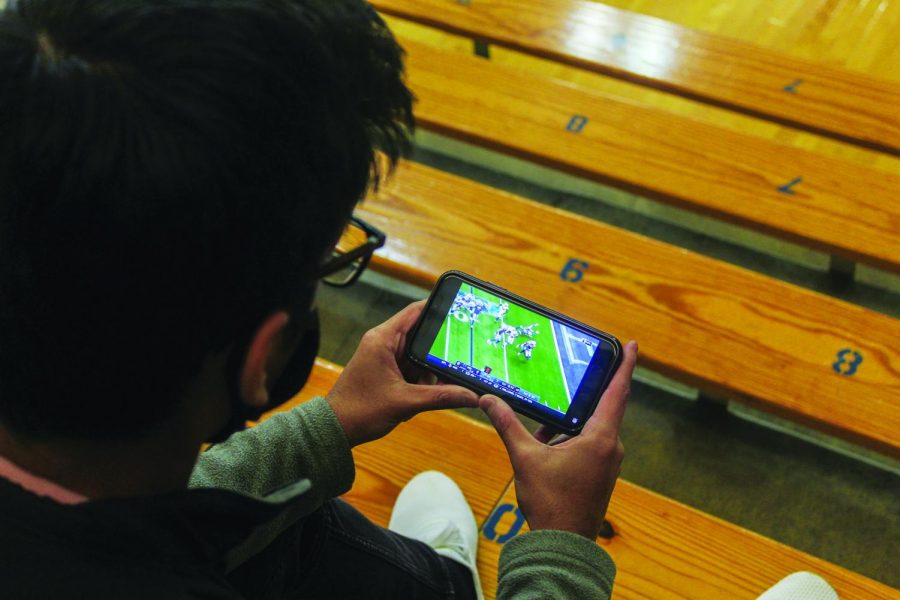 Junior Shrithan Sandadi streams a football game on his phone during school. Sandadi said he only streams games on his phone when conventional games are not being shown on TV channels.

The ratings for numerous sports events this year are some of the lowest ever recorded. Game 6 of the National Basketball Association (NBA) Finals recorded only 8.29 million viewers on ABC, according to Nielsen data. For reference, Game 6 of the 2019 NBA Finals had 18.76 viewers. The National Hockey League (NHL) also experienced a drop in viewership, recording the lowest average viewership of its Stanley Cup Final since 2007.

Some have attributed the lower viewership to the fact that leagues that typically do not have concurrent seasons are all playing games at the same time this year due to the COVID-19 pandemic. However, others have placed the blame on websites streaming sports games online for free, offering a convenient alternative to television.

Junior Shrithan Sandadi streamed football, tennis, and basketball games on his own computer. He watched games on conventional television when the games aired on a network he could watch. In other cases, Sandadi turned to streaming to watch games.

He said, “The only time I watch games on online streaming is when I don’t have the channels on a conventional game, so if the game is on conventional TV, I won’t watch it on a live stream.”

However, others, like junior Nolan Jones, have used online streaming much more. Jones primarily watched the NBA Playoffs via online streaming sites. Jones watched streams mainly because he did not have cable television.

Jones said, “I don’t have cable TV, and cable TV is pretty expensive, so (streaming) allows me to watch sports live without paying for services.”

Online streaming allows people to watch sports games simply by finding a link on a website that will redirect viewers to a page showing a live stream of the game.

According to Jones, the viewing experience was not much different compared to the experience on conventional television.

Jones said that he has been able to keep up with and stay invested in sports because of the easy access streaming provides.

“I’m a much bigger fan of basketball than I probably would have been if I hadn’t been able to access these live games on my own. To really get involved, you have to watch the sports,” Jones said.

Sandadi also touted the accessibility of streaming as a major benefit.

“I think it’s a lot easier for you to just watch it on a computer, because you can watch it anywhere you have WiFi. You just have to go to the website,” Sandadi said. “Instead of looking live score updates, you can actually watch the live stream of the game, and you’re more immersed in the action.”

However, according to CHTV teacher Brandy Ostojic the streaming of sports games could be in violation of copyright laws, so the legality of sports streaming is questionable.

Ostojic said “If it was a company that was streaming (the games), I assume the NBA would go after them for copyright violation, because that would be copyright infringement.”

Indeed, many leagues and platforms have combated the spread of such streaming sites. The social media site Reddit has cracked down on these sites. They have banned subreddits, online communities within the site, like r/NFLStreams and r/NBAStreams for giving users access to streaming sites.

However, despite their best efforts, streaming sites still persist. According to Jones, these sites enjoy so much viewership that they are at least in part responsible for the lower TV ratings of sports games this year.

Jones said about the NBA, “These websites were experiencing so much lag because of so much usage. They probably caused at least a 20% dip in viewer ratings from cable television.”

Sandadi, however, diminished the impact that streaming had on ratings.

“I don’t think that was that big of an issue,” Sandadi said. “I think the NBA Finals suffered from a combination of a lot of other factors falling into place. I don’t think live streaming really affected the numbers.”

Jones believes that the sports leagues will ultimately have to adapt to streaming if they wish to continue to thrive and keep ratings high.

“They will definitely have to adapt. If they don’t want to keep losing millions of dollars to these pirating services, they will have to adapt to our culture now, which is affordable streaming services,” Jones said. 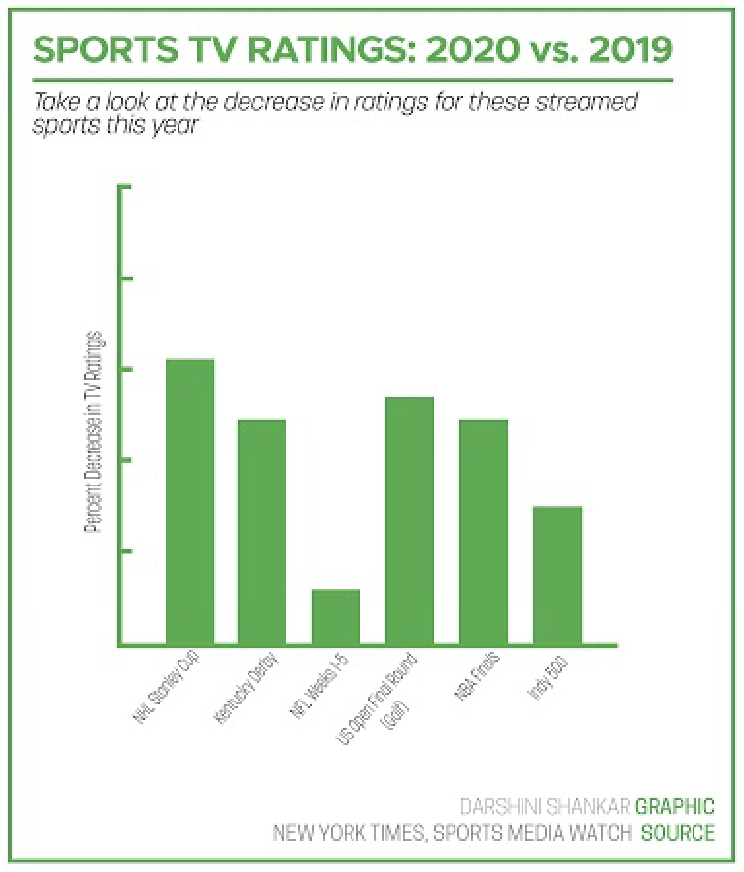