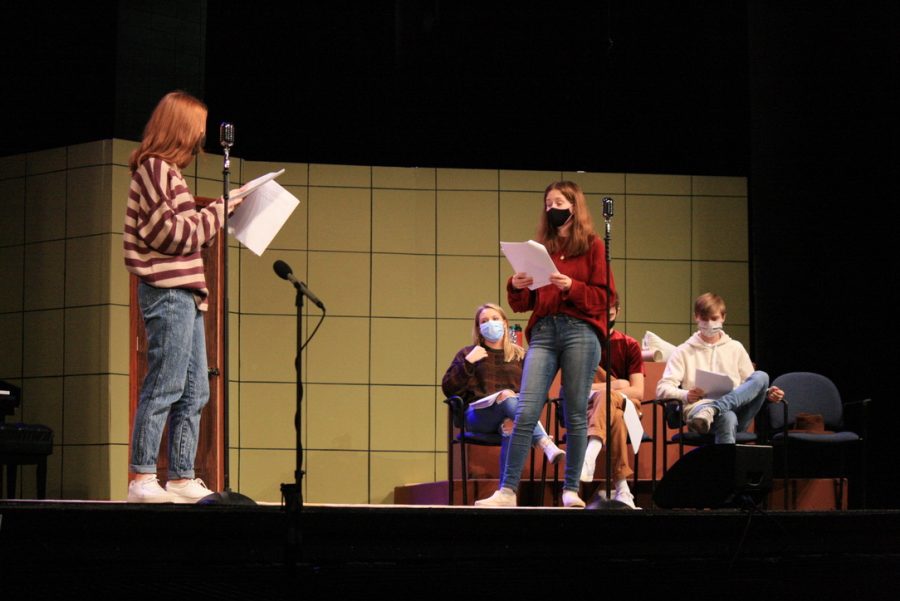 Theater cast members rehearse for their upcoming production “Murder in Focus” on Nov. 2. The cast expressed their excitement and enthusiasm to perform this production as many of the other shows were cancelled this year.

The theater department is preparing for its fall production, “Radio Mystery Theatre.” The performances will take place at 7 p.m. on Nov. 12, 13, and 14 at the Dale E. Graham Auditorium. Tickets are $10 each and are available through www.ticketracker.com. Although the fall and winter shows will still take place this year, COVID-19 has caused some setbacks for the theater department’s other annual performances.

According to Sarah Warf, Theater student and junior, “We would normally also be doing a show to take to the Indy Fringe Festival, but that was canceled this yea due to COVID. We would also be starting up the Comedy Sportz team, but that was also delayed to the second semester due to complications resulting from COVID.”

Despite these drawbacks, the department is continuing to work to adapt to the new adjustments this school year brings. Audrey Hockins, theater student and sophomore said the most difficult aspect has been the inability to work with the whole case during rehearsal.

“It has been a challenge this year with the cohorts to rehearse because we usually do some rehearsals in class so only having half of the group has definitely been different,” Hockins said.

To compensate for the lack of group rehearsal, the entire cast has been meeting after school twice a week in order to work together. In addition to “Murder in Focus,” the play “the Manhattan Strangler” will also be part of this year’s fall production. Both plays are radio shows. Jim Peterson, the head of the theater department, said he decided the students should perform radio shows in order to adapt to the unpredictable nature of this year.

“I had to take into consideration the possibility that our production might have to move virtual if the school was forced to shut down during the pandemic,” Peterson said. “If that were the case, I wanted to make sure that my production was flexile enough to happen even if we had to shut down. That’s why I chose the Radio Mystery Theatre.

“Murder in Focus” is a play about a group of radio actors who perform two suspense stories. The characters get caught up in a mystery of their own when one of their directors goes missing and a lunatic visits the radio station. Warf plays two different characters in the play: Sid, one of the directors, and “The Raincoat Lady,” and escaped mental patient who, according to Warf “may or may not have a hand in a person going missing.” Hockins plays Slyvia Jarvis, a news telecaster.

In addition to social distancing and wearing masks during rehearsals, according to Peterson precautions will be taken to enure the safety of the cast, crew and audience during the performances. For example, the number of audience members had been limited to 150 people per performance.

Peterson said, “Families will be placed together in groups and distanced from other members of the audience. Seats will be assigned and marked as designated seats. Audience members, as well as the case will be wearing masks through the entire production.”

The show will also be broadcast online for those who want to see the show but are not able to.

Hockins said she feels grateful to be able to perform this year amid the pandemic.

She said, “It’s unfortunate that the year is turning out the way it is, but I am still very happy that we get to do our regular shows this semester. Not all schools get to do that, so we are very lucky. The only thing that this will affect about performances is the amount of people that will get to see it, which is sad.”

Warf said she agreed with this idea and also discussed the difficulty of performing and conveying emotion while wearing a mask.

“I think it is challenging to express our characters from under our masks,” she said. “It is important to show emotions through the face and half our face is being covered up, so it will take extra work to make sure that our expressions read to the audience.”

In spite of it all, Warf said there is a silver lining. The theater provides a form of escape and entertainment for the audience, which is especially necessary during this time.

“I think that going to see live theater creates a sense of normalcy in this troubling time.” Warf said, “For an hour or two, the audience can sit back, relax, laugh, and worry about the characters on stage instead of the world around them. It’s a chance to remind everybody that there is a light at the end of the tunnel and that the show must go on, even when it feels like there is no hope.” 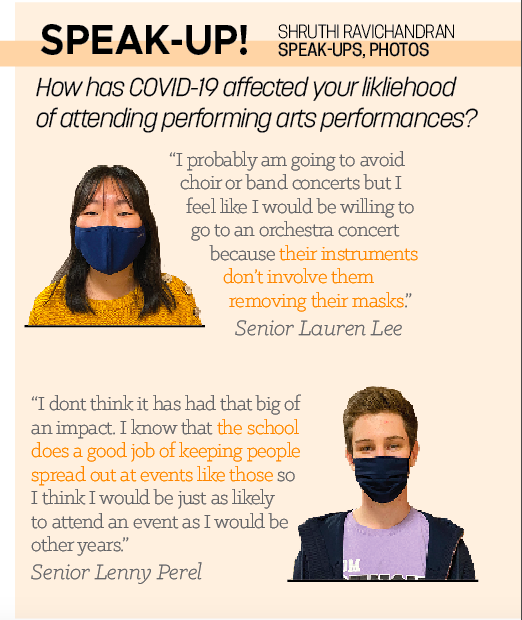