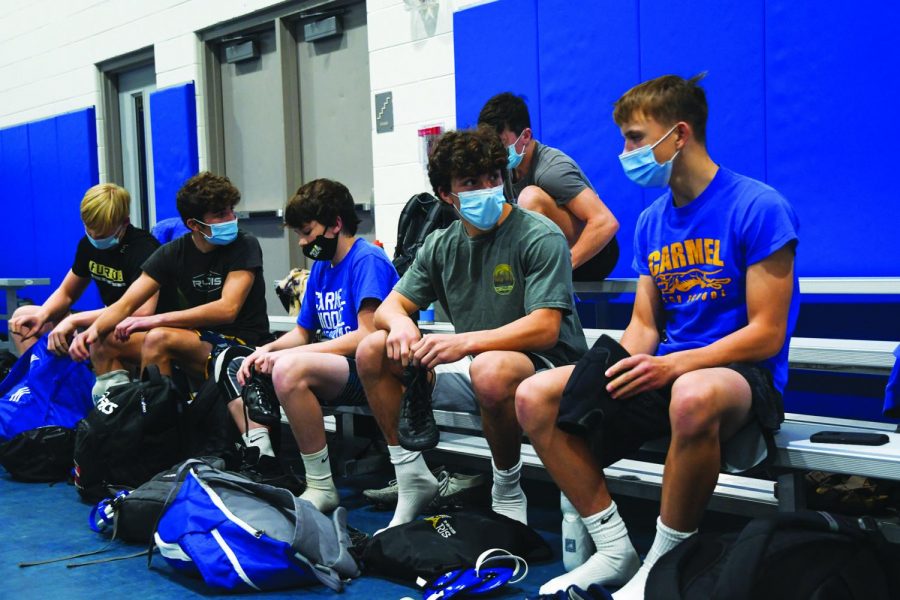 MASKS ON: Members of the wrestling team put on their gear before practice. Harel Halevi, varsity wrestler and senior, said he believes contracting the virus while wrestling is less likely than it seems because athletes meet only a few people at each meet on top of the many new safety procedures.

For all sports, everything including practices, games and matches has changed due to the COVID-19 pandemic. The Carmel wrestling team has also been adapting to new rules and regulations. In order to prevent the spread of the virus, there have been some changes made to the way practices are structured. One of these new changes includes keeping wrestlers in groups of six. They do not wrestle outside of their assigned group.

Harel Halevi, varsity wrestler and senior, talked about some of the new procedures due to the COVID-19 outbreak.

“It’s like with every sports team, it’s a mask in and mask out, or mask going in and going out (when entering and exiting practice),” Halevi said.

Halevi also mentioned that the risk of contracting the virus for a physical sport like wrestling may not be as concerning as it may appear at first glance.

“I think it’s a lot less dangerous than it may seem because you’re really only in contact with one person during a meet,” Halevi said. “So the chance that someone like a 170-pounder like me would be dangerous to a 113-pounder on another team is very unlikely.”

Head Coach Ed Pendoski also talked about what the team is doing in order to stay safe and healthy and how that affects practice. In addition to social distancing as much as possible at practice, the athletes are continuing their previous sanitation requirements such as cleaning the room before and after practice by mopping the mat and walls.

“We are paying close attention to practice procedures. Practicing in groups of six isn’t always the best (way) to prepare for the state tourney in February, but we have to learn how to do the best we can within the situation we all are in right now,” Pendoski said via email.

“Wrestling is a physical sport, and we can see how society would be quick to say that there are many challenges with being socially distant and wrestling,“ Pendoski said. “It’s kind of funny to think about socially distancing and wrestling at the same time, but after you look at our sport, we are an individual sport.”

He said he is looking forward to this season this year and believes the team has a lot of talented returning players. Although there are many circumstances that make it difficult for athletes to have a “regular” season during a pandemic, he talked about the importance of trying to stay as optimistic as possible in the current situation.

“Right now the biggest challenge is to remember to enjoy the process,” Pendoski said. “The stress of a global pandemic can be quite consuming, and we are trying to remind our room often that we need to be safe and follow procedures. After we do that, we sometimes have to remember to enjoy the journey. It’s not always easy to find in situations like this, but that doesn’t mean it’s not there. (We) just have to look harder for happiness sometimes.”

Like Halevi, T.J. Barrett, varsity wrestler and junior, said that although practices have changed in some small ways, the COVID-19 pandemic has not really affected the way he is preparing for the season.

“It has not impacted the way I prepare for the season as I just focus on one duel at a time and if we don’t have it due to COVID, then onto the next,” he said via email.

Additionally, Barret shared some of the challenges of wrestling during a pandemic.

“Some of the challenges behind wrestling with COVID-19 (include) the risk of the close contact and the risk of sweating and breathing on each other. This makes it difficult to social distance, although you only wrestle and interact with a few people, limiting the risk compared to interacting with everyone on the team,” Barrett said.

Barrett also shared his favorite part of being a wrestler and what he is looking forward to for this season.

He said, “I am most looking forward to state and the state tournament, as I am really hoping that it gets to happen. Those environments and the atmosphere is unforgettable.”

Halevi said that due to C-19 closing schools in the spring of 2020, he was able to put on more weight during that time period. He said that this year, he is focused on continuing to maintain that higher weight than he was previously. He also said that he is looking forward to competing again this year.

He said, “I’ve been dying for (this season) since last season when state was canceled. There was one tournament, but I think local competition is the thing I missed the most.”