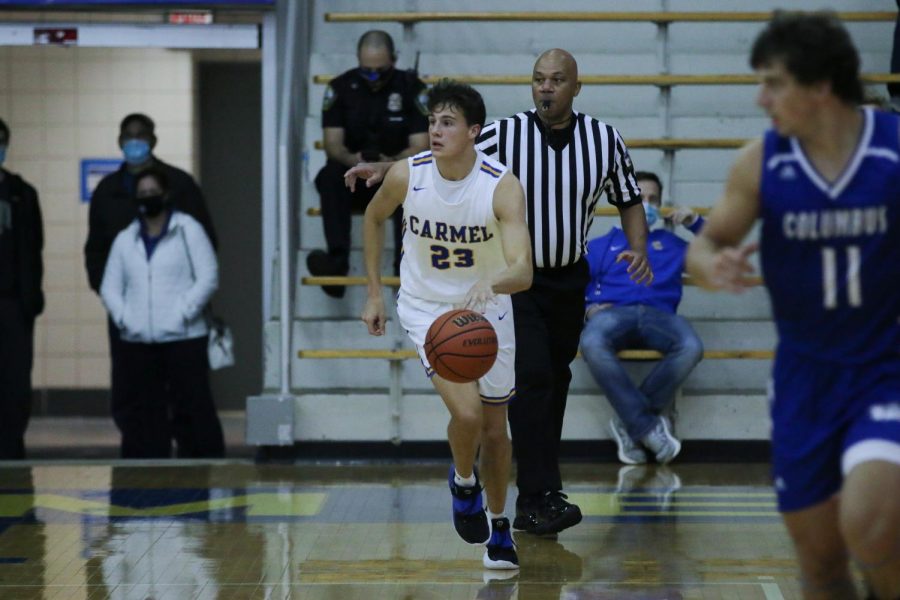 Bryce Beery, men’s varsity basketball player and senior dribbles the ball down the court during the game against Columbus North on Nov. 24.

After a win in the men’s varsity basketball team’s season and home opener against Columbus North, the team looks to improve their record on Dec. 4. They will play Metropolitan Interscholastic Conference (MIC) rival, Lawrence Central in the Eric Clark Activity Center.

However, the season has been constantly changing with new game dates and opponents. Many teams are cancelling and postponing games due to COVID-19, therefore the team is prepared for anything. One of these major changes to this season is the number of fans allowed at games.

Bryce Beery, men’s varsity basketball player and senior said via email, “I think the biggest impact it will have on high school basketball is the capacity count being lowered. It evens the playing field a bit more without home court advantage.”

Osborn added via email, “One of our biggest challenge(s) over the last 8 months has been preparing for the unknown (mentally and logistically). We’ve never experienced anything like this. So, we’re constantly learning new ways of doing things that run in accordance with safety protocol or mitigation procedures….while always putting our players in a position to be successful.”