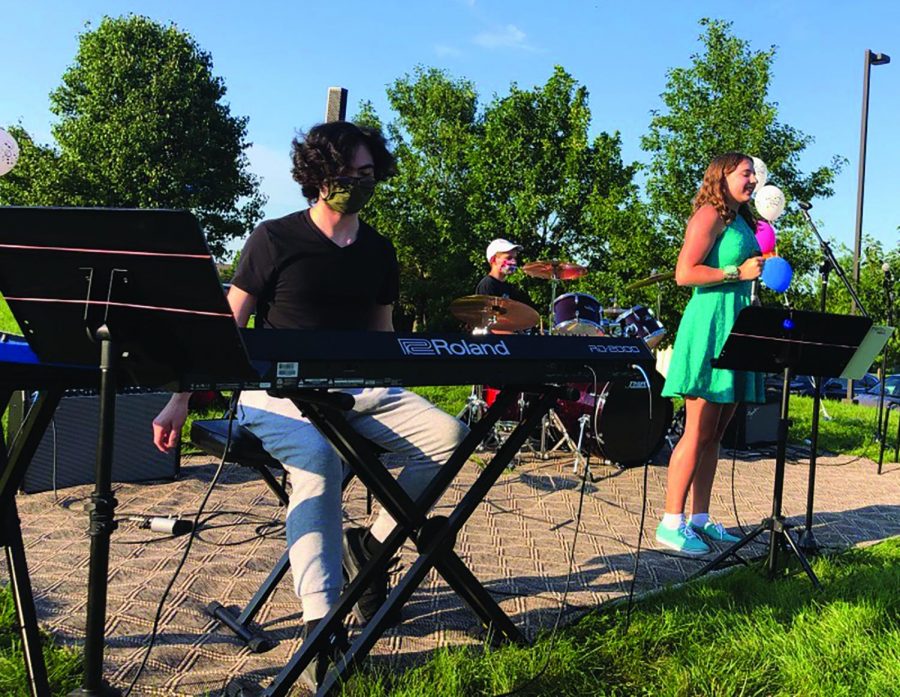 Mackenzie Edwards (right), lead singer of band "Lightning in a Bottle" and sophomore, sings outside with accompaniment from her bandmates. Edwards said that being involved with the band has allowed her to interact with a vibrant community and share music with others.

What inspired you to pursue music?

I can’t really remember. I was like six when I started singing. But I don’t know. What inspired me to go on was, I don’t know, singing or music, generally. It has community. You know, like when you’re singing, you’re part of the choir. When you’re playing the guitar, there’s someone playing with you. It’s the sense of community, and you get to make sound, you know, music. I always thought that’s a really cool thing. 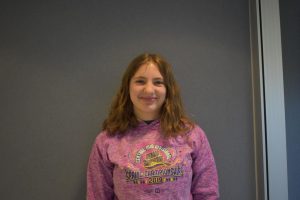 How does music impact your daily life?

Well obviously, I have to practice, you know. It takes up time. But other than that, it doesn’t really impact me too much.

What do you tell yourself before you perform?

Describe the effect your band has had on your life.

Well, one, it’s given me something to brag about. Let’s see. Well, like my members, the members of my band. They’re always really nice, so you’re never alone performing. After every performance, I fist bump with my pianist. We’re really close, so it gives me friends. Yeah, it’s just really cool to be part of a band.

Have you explored writing original music?

Yeah, we did that once. We talked about the chord structures and stuff, and all that, and I wrote a few lyrics out. But we didn’t really get too far with that. We’re probably going to pick it up soon, though.

How would you describe the music your band plays?

We play a lot of alternative rock. Let’s see. Alternative rock, a lot of ‘80s music. Also, pop songs like ‘Castle on the Hill,’ and we play some Elton John.

What kind of music is your favorite to sing?

Alternative rock is a ton of fun, because it takes a lot of energy, and you get to be jumping around the stage.

What advice would you give students considering exploring music?

I would say ‘go for it.’ You know, it’s a lot of fun. You get to play music for everyone in the audience. And, you know, it’s that community; you get a lot from it.

What helps you perform in front of crowds?

Well, experience for one. I was really shy on stage. But after going on it a lot, you get used to it. But also, you just kind of have to forget that people are watching, because it’s no different than practices if you’re doing it right.

Would you say music gives you a sense of confidence?

Yeah. If you’re making something like music, then there’s not really anything to be scared of, because you’re just kind of giving your soul out to the world in the form of music. And if they don’t like it, I mean, try again. Nothing to be scared of.

How has music helped you express yourself?

There’s a bunch of different emotions in every song, and you get to express those emotions through your songs. And like, a lot of times, it resonates within me, so I’m also able to express my own emotions.

How has being in a band helped you learn more about music?

Well, we talk about how to make harmonies. We talk about the history of music, like where blues originated and stuff, and historical figures like Queen and Michael Jackson and stuff. And we talk about how to ‘roadie,’ you know. We wrap chords. My teacher hates it when people wrap chords wrong. And we also put up, we break down the stage and put all the stuff back in the band. It’s different from choir, because in choir you just learn how to sing. But in a band, you have to learn how to perform with everybody, you have to know how to have the right stage presence, include the crowd in your singing or playing. You have to know how to be courteous to your other people breaking down the stage, how to do it correctly. You also learn how to make songs and how to collaborate with others and make those songs.

Are you learning any instruments, in addition to singing?

Yeah, I’m learning guitar. It’s killing my hands. But once I get through that beginning, I think it’ll be a lot easier, once I get those calluses. The guitar is very different from singing, but I have that background in music, so it’s not too bad, but it’s fun.

How does technical music theory training apply to singing in a band versus singing in choir?

Singing in a band, you have to kind of know the other. Like, literally the sheet music for yourself is the same, but for others, you have to be able to know how to read it—for drums, guitars, piano, bass— to be able to help others if they need it. I can’t really help at all because I’m not too good at that yet. But you have to understand the notes for guitar and piano and the different drums on the drum set and stuff, so you can understand what the teacher is telling you. You have to know a beat, you have to know what the quarter notes and eighth notes sound like on the drums so you can understand the structure of the song.

Do you have anything else to add for our readers?

Yeah, just that it’s a lot of fun. Music is fun.