Senior Aidan Hurley smiles and poses outside. Hurley created the WHJE fashion podcast, Fashion Philosophy, as a way to interview and learn from various guests.

Recently, celebrities such as Harry Styles have come into the spotlight for wearing traditionally feminine clothing. Although entertainers have been breaking gender norms with their clothing for years, a man wearing a dress on the cover of the December issue of Vogue Magazine caused the people of the internet to choose sides as they either praised Styles for the photoshoot or condemned him for “not being manly enough.” But despite the media’s take on fashion trends, many men have enjoyed living outside the stereotypical male standards.

Junior Daniel Tanner said he has experimented with wearing dresses and more feminine styles for many years.

Tanner said via email, “In seventh grade, which I think was about 2016, was when I really started to experiment with what is traditionally viewed as ‘feminine/womenswear.’  It was like second-nature for me. It’s just what I gravitated towards and felt much more comforted and excited by.”

Aidan Hurley, creator of the “Fashion Philosophy” podcast on WHJE and senior, said he takes a different approach to his personal style.

Hurley said via email, “I don’t intentionally experiment; I have just stopped giving attention to the labels. If I like how I look in it, I’ll wear it. Guys really sleep on the women’s section. There is a lot more variety in terms of colors in women’s as opposed to the men’s section.”

Historically, what is now viewed as “feminine” used to be the pinnacle of masculinity. In an article titled “A Timeline of Men’s Feminine Fashion” for huffpost.com, author Tove Hermanson said in the 1600s male fashion was more of the current definition of feminine rather than masculine.

Tanner said as fashion changes, so do people’s perceptions of what fits certain stereotypes.

He said, “In the earliest known records of humankind, men wore dresses, togas, chitons, Houppelandes, robes, etc. The men who helped to build the major nations of this world did it in heels, wigs and makeup. Long story short, I think our definition of ‘menswear’ and ‘womenswear’ is forever changing, and as we progress I can only hope that these boundaries can be even more eroded and we can keep having the conversation on what is truly ‘feminine clothing.’ Both men’s and women’s clothes have changed a lot. They both go through more ‘feminine’ and ‘masculine’  evolutions, but as a whole what we consider ‘women’s and feminine clothing’ in our current age is much more fun to me. I love playing with the duality and androgyny of clothing, and I think that feminine clothes allow more freedom.”

Throughout recent history, male celebrities such as Prince, Billy Porter, Jaden Smith and, of course, Styles have pushed societal boundaries with their more flamboyant outfits. As they do this, they influence the fashion industry and what is “acceptable” for men to wear.

Hurley said he thinks it is helpful to have celebrities break gender norms.

“I feel like we hold entertainment icons to such high regard which makes them very impressionable on us,” Hurley said. “They are inspiring because everyone can see them and everyone can hear them. They have an impact because they can show a large number of people what can be pulled off.”

Tanner said he agreed with Hurley but also warned of the dangers idolization can present.

He said, “I think when ‘big name’ celebrities and icons break these norms, they make great strides and great pushes towards normalization. I think idolizing one picture of something isn’t necessarily great, but I do believe that celebrities with big platforms can make a great amount of progress by just challenging these norms.”

The normalization of genderless clothing is happening slowly but surely in the media and in “real life.” But when it comes down to it, Tanner said the media should not control what is accepted and people should wear whatever makes them most comfortable.

Tanner said, “Wear whatever you want, fabric and clothing truly have no gender.” 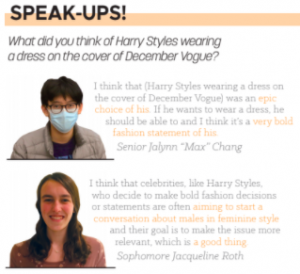