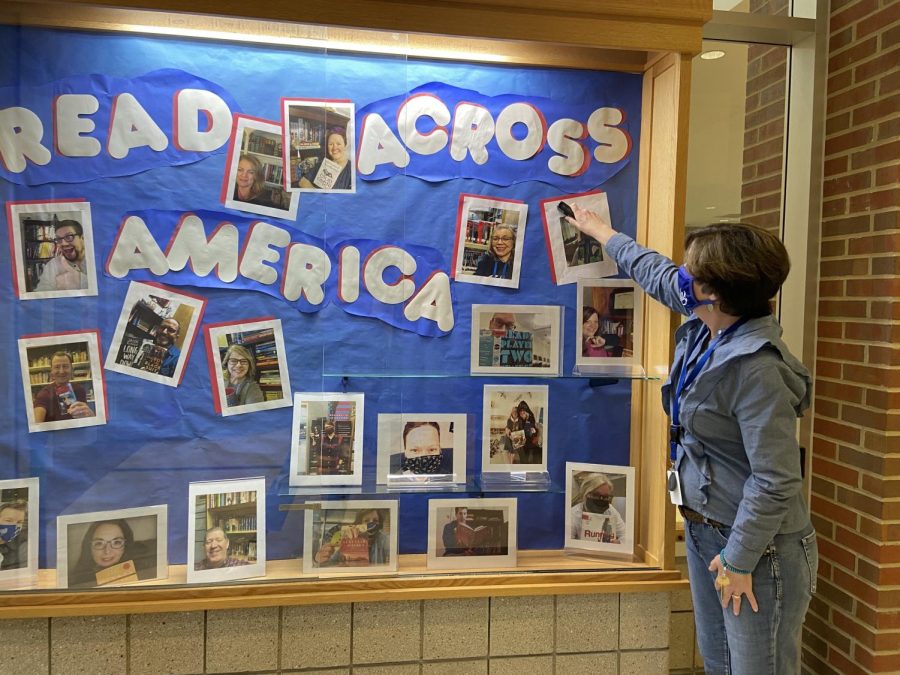 Media center specialist Gail Marcopulos works to put up a display for Read Across America. This event is open to teachers and they can participate by sending in a ‘shelfie’ with their favorite book, as seen above, or by choosing a different way to participate.

Multiple new displays and events are underway in the media center according to Terri Ramos, media center and communications department chairperson.

Ramos said some of these displays include the LGBTQ poppy display, the cultivate compassion display and the red cross water safety awareness display. There are multiple other new decorations and exhibits being showcased this month as well, which can be found around the media center according to Ramos.

In terms of events, the voting for the ‘Rosie Books’ is concluding in April and there is the teacher contest for ‘Read Across America’ in the works. She said the introduction of next school year’s books to Jim Peterson’s IB Film Students will also be occurring shortly as well, so the students will have the chance to create trailers based on them.

In addition to the events and displays, book clubs are also continuing in the media center.

According to Gloria Sanchez, media center user and sophomore, the book clubs are an important part of the media center. “It is important to have book clubs available because it gives students a chance to socialize,” she said via email. “Book clubs allow different people to share their ideas and be part of a group.”

Ramos said out of the four book clubs, the #CurrentlyReading and Virtual clubs are very popular, but the SilverHounds and SSRT clubs are lower in attendance. Ramos said, “I don’t know if I didn’t do as good of a job of getting announcements out (for those clubs), so I’ll try again this month and see how it goes.”