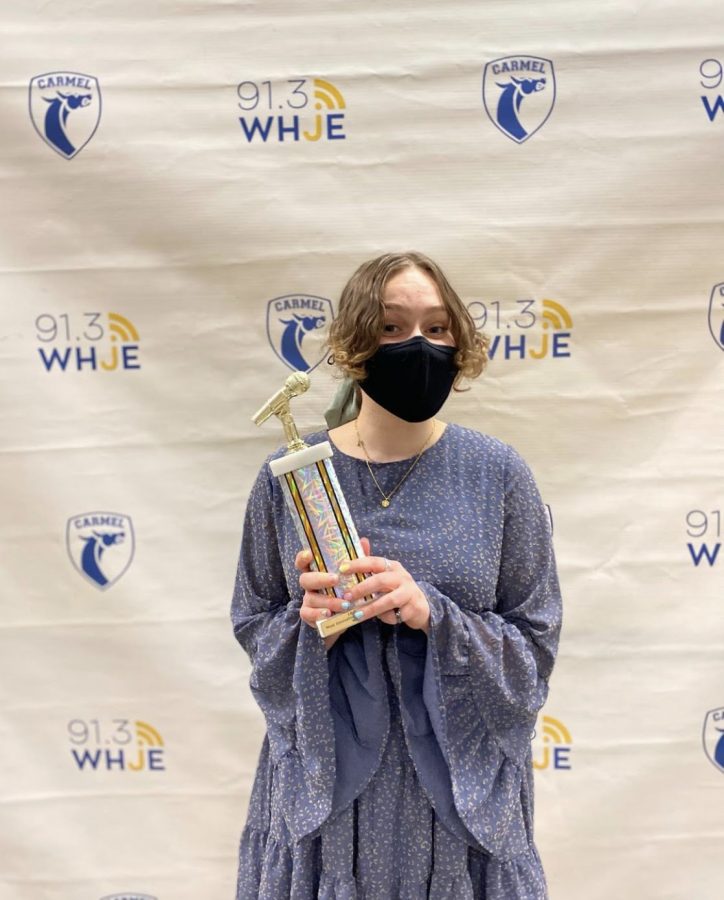 WHJE events manager and senior Jessica “Jess” Cooper stands with her “Best On-Air Pledge Drive” trophy. Cooper said participating in competitions is beneficial. Cooper said, “I think (competition) steps our content up just a little bit because we know we can be recognized on that level. Of course we do it for our listeners and for our class, but I think it also gives it that edge of 'I can be a nationally-known broadcaster.'”

The Intercollegiate Broadcasting System (IBS) recently hosted the virtual IBS 2021 Conference where WHJE had 23 individual winners in 41 different categories and WHJE won the National Radio Station of the Year award for the first time. Moreover, WHJE is currently planning for Radiothon, which will consist of broadcasts on April 17 and 18 in order to raise money for WHJE.

Jessica “Jess” Cooper, WHJE events manager and senior, won the award for Best On-Air Pledge Drive. Cooper said she won this category for her work in organizing Rileython, which successfully raised over $9,000 beating their fundraising goal of $3,000.

“(For) that category, we submitted for Rileython and winning just kind of made me feel so much better that all my hard work to establish the pledge drive was credible and my hard work was earned and it was recognized on a national level which was so cool,” Cooper said. “It just means that other people heard and understood our cause as much as we did, and I know the whole station is super happy that we won that one and I’m ecstatic as well.”

“I was delighted. It’s a lovely honor to receive (this award) and I’d like to thank the people who nominated me because I think a number of people did do that and that was recognized by the IBS board and I’m delighted that I’ve been given that honor,” James said. “So, it was unexpected but a lovely, lovely thing.”

James also said WHJE is planning for Radiothon in order to raise funds in order to pay costs associated with WHJE broadcasting.

“So, we’re going to have a whole weekend (April 17 and 18), (that) Saturday and Sunday, where, like Rileython, we’ll be broadcasting live broadcasts all day but this time we’ll be fundraising for the radio station because we actually need several thousand dollars every year to keep the station running. We need money to pay for PhotoLine, for phone accounts (and) we need money to keep the website going (and) for the competitions that we enter.”