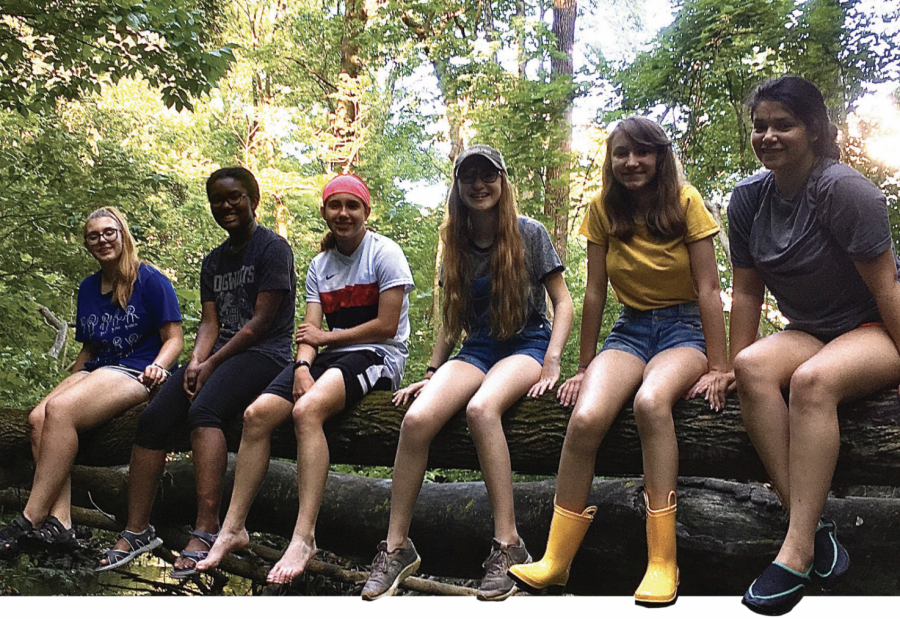 Freshman Allison Miller (second from right) and members of her troop sit on a fallen tree along their creek stomp. Miller said that being involved in Girl Scouts has improved many important life skills for her.

March 12, National Girl Scouts day, commemorates the day that the first Girl Scout troop was registered in 1912. Consisting of 18 girls in Savannah, Ga., the “Girl Guide” organization was founded by Juliette Gordon Low, who had met the founder of the Scout Movement, Robert Baden-Powell, when she lived in the United Kingdom. Low had envisioned a Scout Movement but for girls, leading to the establishment of Girl Guides, which later changed its name to the Girl Scouts of the United States.

Allison Miller, a Girl Scout since kindergarten and freshman, said joining the Girl Scouts has helped her grow as a person and improved her self image, confidence and social skills.

“I think that scouting has influenced my character in many ways. It has improved my leadership skills and ability to help those in need in a more impactful way,” she said. “(Scouting) has also taught me to look after myself, which contributes to my high self confidence and high self esteem. It has also made me a more outgoing person. Scouting has benefited my social skills because of all of the opportunities to talk to new people and be in front of a crowd.”

Jenn Stumpp, Miller’s Girl Scout troop leader, said she loves to watch her scouts grow as leaders and as valuable members of society.

“The last couple of events they have led, they have not needed me for anything. I’ve seen them grow in maturity and responsibility, and I’ve watched them grow out of their awkward phases. Even though every member of our troop has joined us at a different time in their scouting journey, it has been very rewarding watching them grow,” she said.

Max Ahrbecker, a Boy Scout since first grade and senior, said the Scouts have taught him many valuable skills as well. He said he built a deck for his Eagle Scout badge.

“Through leadership within the troop, I gained many important skills. Scouts helped me develop my public speaking and communication skills, and I am much more comfortable talking to new people,” he said. “It also taught me how to teach others new skills, something I consider very valuable. I also learned how to budget, plan, and raise funds for a project.”

Stumpp said she believes the Scouts are a great program. She said one of the reasons are the relationships her scouts create with one another.

Ahrbecker agrees the connections were important. He said in his troop, he is someone everyone can talk to.

“I am an introvert by nature, and I made many friends through Scouts. Many of my current friends were involved in my troop. Everyone in my troop respects me since I am someone that they can look up to/voice their concerns to without being mocked. It is important to me that everyone feels included and respected, so that they feel like Scouts is their safe place. The only way to truly understand someone is to get close to them, and look at the world from their point of view.”

Miller said she agreed and mentioned how she felt Girl and Boy Scouts are like a big family.

“I joined scouts because in kindergarten, they had a booth and I had a lot of fun playing with the other scouts. To a 5-year-old, that’s all that matters,” Miller said. “I would definitely recommend scouting, regardless of Girl or Boy Scout. I believe [the Scouts] is a very flexible activity, and after one point, it’s just a big group of friends.”

Despite supporting Scouts in general, Ahrbecker said he believes there are still some issues with the Scouts organization. He said he does not like how the Scouts blindly glorify America and how they require religious affiliation.

“While it is good to recognize the privileges we have in America, it is important to see the negatives as well. Kids should be able to discuss issues such as climate change or (Black Lives Matter), while asking questions, voicing concerns and offering potential solutions,” he said. “Thinking about this at an early age will help people understand issues better and become more comfortable with change. I also don’t like the requirement of being affiliated with a religion. I feel like it is important to include all people regardless of religious beliefs.”

Despite the Scouts’ nationalism and religious affiliations, Ahrbecker said he thought scouting changed him for the better, and he would recommend scouting. He said one impact was the development of his character.

“The main moral code of Scouting is the Scout Law. Its 12 points include being trustworthy, loyal, helpful, friendly, courteous, kind, obedient, cheerful, thrifty, brave, clean and reverent. I try my best to live by these principles,” he said. “I would recommend scouts to the readers since it teaches valuable life lessons and allows one to make friends and get outdoors. It was extremely important to me growing up, and has influenced my path after high school.”

To read another story about Girl Scouts, click here.