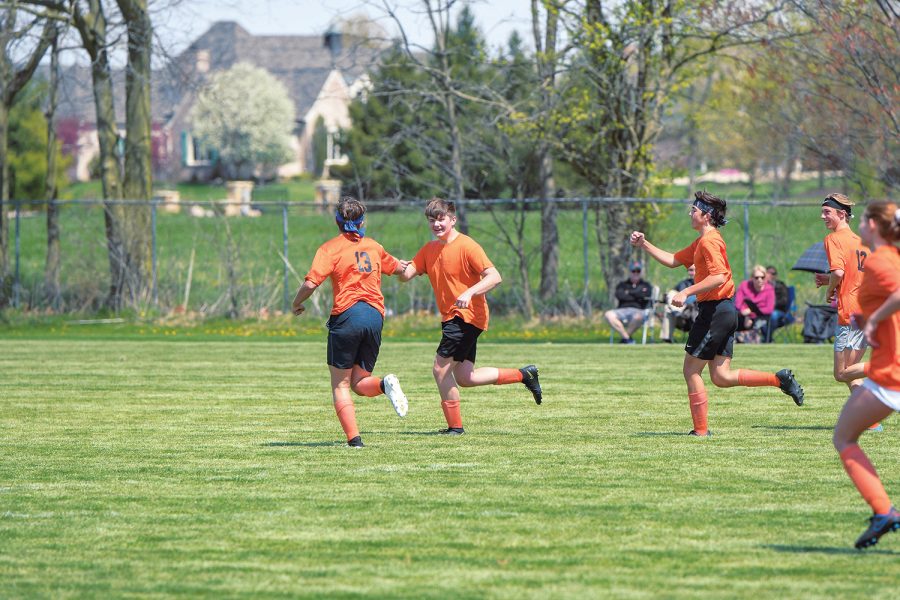 TERRIFIC TEAM: Junior Joey Duncan (second from left) fist bumps one of his teammates during his soccer game. Duncan said everyone is included when playing recreational soccer.

Junior Joey Duncan can not wait to start playing recreational soccer after spring break is over. He said it’s been almost two years since he has last played soccer just for fun. This is because the COVID-19 pandemic forced all recreational sporting leagues to cancel their seasons for the year. Now with the pandemic slowly regressing, Duncan said he is now hopeful for an exciting season, even with restrictions and guidelines.

Recreational sports typically consist of sporting events that are simply meant to be played for fun, not competitively, according to Felix Yau, assistant men’s varsity soccer coach. He said via email, “Many kids choose [recreational] sports over high school [sports] because they still love the game, but don’t want to put in the time commitment to play high school.”

Duncan said he agrees with Yau and said another reason why he enjoys playing soccer at Carmel Dads Club is due to the convenience factor. “Personally, I prefer playing here because I know I don’t have to travel that much and it costs much less money,” he said. “Not only that, it is still competitive and I can still be active while I play.”

Junior Charlie Ernst plays recreational basketball and baseball. He said the pandemic has caused him to miss out on potential opportunities to play with friends and practice but is still excited for the upcoming season. He said he chooses to play sports for fun mostly just to have a good time with his friends without having to invest a lot of time into the sport.

Because people choose recreational sports over high school sports for a certain reason, there are differences in how the games are played. “I believe that high school sports are another way for kids to get recruited to play in college. Rec sports are for kids who still love the game, but don’t necessarily want to play at the next level,” Yau said. “Also, with high school sports, you’re playing against some of the players in the State and with rec, you are not.”

He said, “I strongly believe kids who play high soccer learn a sense of community pride. They are playing for their school and their city/town.  They aren’t just playing for a Club or a Rec Program, they get to play for an area where they have grown up and lived.”

Although competitive high school sports are beneficial for those who play them, Yau said recreational sports do have some benefits too. “Kids benefit from rec soccer because it allows them to still play soccer and to just have fun.  There is no pressure when playing rec soccer and so the kids and just go out and play,” he said. “There isn’t a lot of technical or tactical need at that level compared to higher levels.”

Ernst said there is also another benefit that comes from recreational sports. “Playing in a league just for fun with my teammates helps me learn new communication skills,” he said. “I also learn how to hold myself and my teammates accountable whenever a problem comes up.”

Duncan said he agrees with Ernst and said recreational sports give people an opportunity to play even if they can not make a competitive team. “One benefit of (recreational sports) is that people who are not talented enough to participate in high school or travel teams can still be active and play for fun in a smaller league,” he said. “This way, everyone is still included and can still have fun with each other.”

Click this link to find out more about Carmel Dads Club: https://www.carmeldadsclub.org

Visit this page to read more about the benefits of recreational sports: https://www.ncbi.nlm.nih.gov/books/NBK310922/ 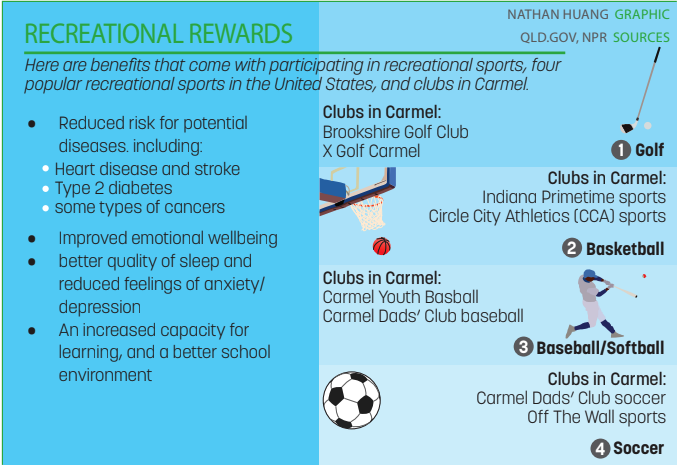