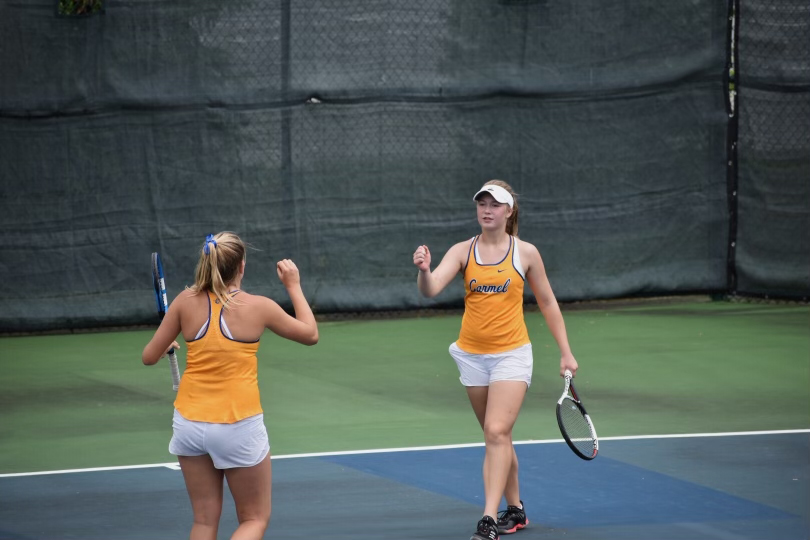 FIST BUMP: Senior Leila Antony (right) celebrates with one of her teammates during a tennis match. Antony and several others from Carmel qualified for the national tennis tournament run by the USTA (United States Tennis Association). She said working with a team has taught her how to build friendships and learn life skills.

Coming this summer,  Junior, Eli Mercer, and Senior, Leila Antony, qualified for club tennis nationals in Orlando, Florida, at the end of June. Working toward this goal, Mercer has been attempting to win these regional championships for three years. “It took three years to win Midwest Regionals, a lot of practice and hard work which got us into this position,” he said. “Winning the national championship is going to be difficult, but with all our preparation, I think we can do it.”

Mercer started as a freshman, finishing last in the event. Each year, he said he got better through playing in high school tennis. Bryan Hanan varsity Men’s Tennis coach said, “ Eli has gotten stronger, gotten more mentally tough, and just has become a much better player. A lot of his improvement is due to him committing himself more in the offseason and playing more tournaments.”

Alike Antony has been training for years, also falling short four times before now qualifying. “We have never qualified before. Our team has played in this tournament for the past four years, and we’ve never won until this year. We started playing in it when we were all freshmen, and now that most of us were seniors when we won, it feels extra special to go out with a bang,” she said.

The team was composed of kids from all over the state, four from CHS and the other two from Fishers and West Lafayette High School. Competing against them were teams from four different states from across the Midwest. Usually, while competing in club tennis, it is more individual-based. This time, it was based on how many sets won by the team. In other USTA tournaments (United States Tennis Association), it’s primarily singles, but this was a mix of singles, girls/boys doubles, and mixed doubles (boy and girl partners), she said.

Furthermore, rallying behind your teammates and having a good bond with one another is crucial in winning. Coach Hanan said, “You can’t have a team if you don’t try and get them to bond and get along and work together. I think it is just as important as having talent. I would much rather have a team that works together, cheers for one another, and pushes each other daily than have all the talent in the world where guys are just in it for themselves.”

Likewise, Mercer said, “ The strong bond we had cheering for each other during this tournament and during high school season is incredibly important in winning. Without the positive vibes and encouragement, we would not be able to win as much as we do.” Almost in a repetitive motion, Antony said, “Being part of a group/team is so important because it gives you a sense of purpose, and that you’re working for something bigger than yourself. I’ve learned that being on a team is much more rewarding than playing alone because you build lifelong friendships and learn life skills.”

This team has been together for four years. They have built these relationships while spending time with each other; While grinding for opportunities beyond high school. With multiple state titles between Antony and Mercer, they spend their time outside of high school at local racquet clubs practicing in large groups preparing one another for their matches. “Raquet clubs are the place we go outside of the courts at Carmel, and this is where a lot of the off-season work comes into play,” Mercer said. “ Work and more work is how you will end up at the top of the rankings.”

As a former player, Hanan said, “Our kids are competitive and strive to be the best, and they compete every day. That is the part of coaching I love. I love watching the guys compete day in and day out and strive to be the best.” Working for this championship took them years of hard work and training. For the younger teenagers, “My advice for younger players is to work hard, keep a positive mindset/attitude even when things aren’t going well, and always try your best/give your best effort. Attitude and effort are super important to enjoying the sport and continuing to grow and improve,” Antony said.