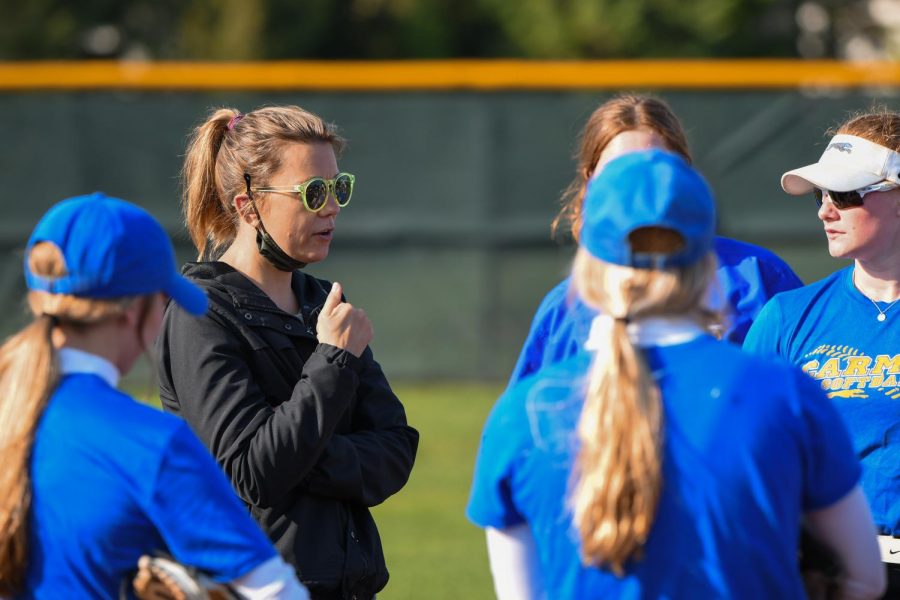 Ginger Britton, head coach of the CHS softball team, talks strategy with players during a game. Britton said female-to-female communication with coaches encourages players to talk about their struggles.

Arguably one of the most monumental breakthroughs of gender equality was when Title IX was passed in 1972, prohibiting sex-based discrimination in federally-funded activities, including school sports. However, as a  New York Times opinion piece entitled “Where Are All the Women Coaches?” pointed out in 2019, this dramatically reduced the amount of female coaches.

However, Ginger Britton, head coach of the women’s softball team, said the benefits of Title IX far outweighed the costs.

“I was lucky enough when I first started coaching to be an assistant in a program that was known in the state of Indiana for pushing through Title IX improvements with girls sports,” she said. “Because of that, I was really able to see how far and how hard those that played and coached before me were really able to pave the way for the opportunities we have in girls programs now.”

Britton also said that the program she first started coaching in did an excellent job with enforcing Title IX, balancing game schedules, coaching staff, and sports offered to ensure equality between male and female athletics.

However, gender inequalities in sports are by no means eliminated, as was shown by the recent March Madness tournament, where a Tik Tok revealing the differences between the men’s and women’s weight rooms went viral and sparked discussions about the existing inequalities between male and female athletics.

“The March Madness tournament brought a light to an issue that should have been recognized years and years ago as gender inequality,” Sophie Esposito, varsity softball player and sophomore, said. “The women who played in the tournament deserved so much better, and they fought for equal equipment.”

To view a story regarding this issue about women’s vs men’s locker rooms at the March Madness Tournament, click here: March Madness: NCAA slammed for unequal amenities for men, women (usatoday.com)

“I think it’s clear that women have received a lot of unfair treatment throughout NCAA basketball,” she said.

As for the underrepresentation of female coaches, Britton said it had much to do with time and familial constraints.

“Female coaches are very difficult to find and to hire and once hired to keep in a program.  I feel this is because the pressures females face in several areas,” she said. “Number one would be in having a family. Coaching salaries are severely lacking in comparison to what you would have to pay to find adequate day care if you have young children at home. My first year coaching with children I almost paid more for two hours of child care each evening during the two month season than I brought in after taxes with my coaching salary.  I basically was coaching for free. Women have expectations that pull them in multiple directions and sadly can’t continue to do everything, coaching is usually the first thing that goes.”

Esposito said she agreed that female coaches are a minority in athletics.

“I feel like there are not many female coaches in softball. I play both travel and high school softball and you don’t see female coaches that often,” she said.

Despite the underrepresentation of women in coaching, the softball team at this school has an entirely female coaching staff. According to Nichols and Britton, having female coaches allows for deeper connections between coaches and athletes.

“I really like having a female coaching staff because they are understanding and relatable,” Nichols said. “They promote the player as a whole integrating team cohesion, resiliency, and confidence.”

“I do think having a female coach that can relate to the pressures that young females face both on and off the court/field is especially important,” Britton said. “To have someone who has once been where you are can make a real difference. I also think a female to female communication can be a safer environment to share struggles that are outside of the physical aspect of the sport.”

In addition, Nichols said that her coaches inspired her to consider becoming a softball coach in the future.

“I absolutely love the game and from personal experience I know how big of an impact coaches can have on younger kids lives. My high school softball journey has taught me how to love the game and in the future I would like to teach others the same,” she said.

Nichols also said that this school has done a great job of promoting gender equality and inclusion in sports.

“I think Carmel is taking steps towards involving women in typical male dominated sports. For example, we have women helping coach our football team which I think shows younger men and women what a more gender diverse coaching staff can bring to the game,” she said.

“I feel very lucky to be working within Carmel athletics,” she said. “This athletic environment does an excellent job of creating an equal opportunity environment.”

Moving forward, Britton and Nichols said they would like to see a greater representation of women in coaching and athletic administration.

“In the future, I hope to see continued effort placed in finding more female coaches for female sports, more females working as athletic directors and assistant athletic directors, and female freshman sports continuing to get attention to grow and strengthen the entire female program,” Britton said.

“I feel like now more than ever females are pushing to be more involved in a variety of sports,” Nichols said. “As a society, if we can keep an open mind and start giving women the chance to coach we can see all that they have in store.”