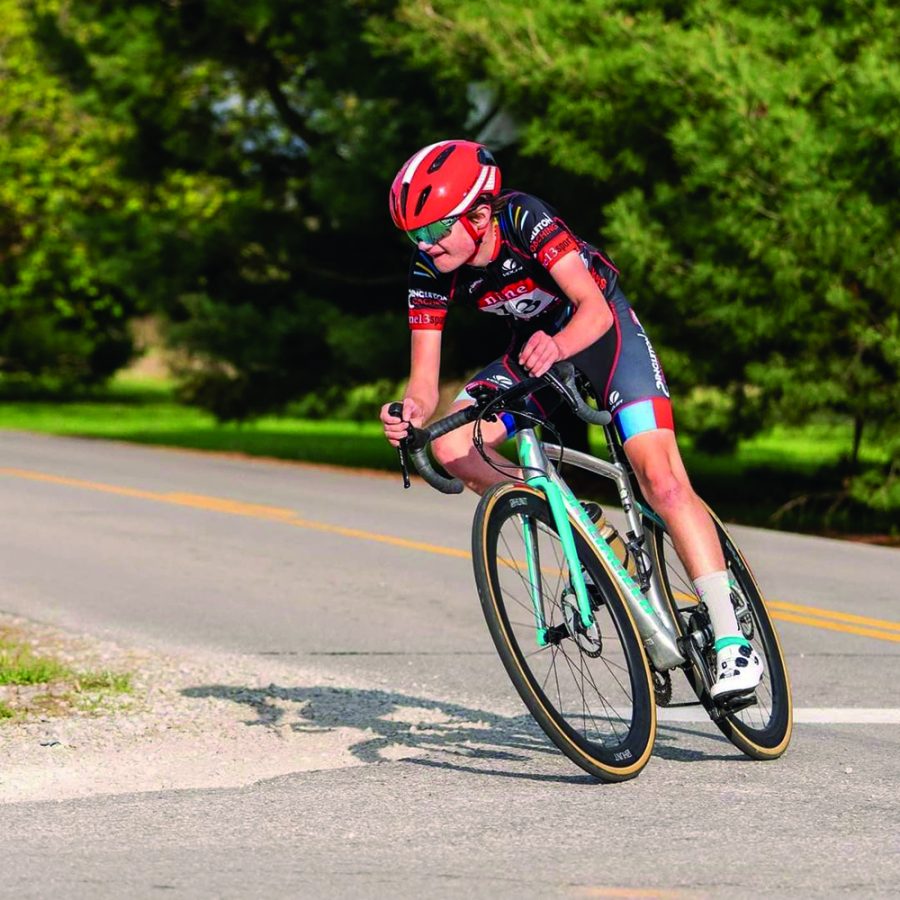 When did you begin competitive cycling? “I began in 2019, although (I) only had one race that year. I really started last year and this year but the number of races is way lower than normal because of Covid.”

What got you interested in competitive cycling? “I had been riding recreationally since early 2018 and had been getting stronger and bike racing just looked like a lot of fun.

What is one of the major challenges of competitive cycling? “It’s very expensive. I can only really afford to do it because I work at a bike shop and get things discounted, as well as putting lots of other things temporarily aside. The main expense is the bike but race entries are a consistent factor if you don’t have a team, and getting wiped out in a bad crash can leave you out a lot of money in the form of medical bills and bike repairs.”

What are some aspects of competitive cycling that many people aren’t aware of? “The amount of time that you need to put in to be good. While there are some people who are naturally gifted and can go straight to the top (like) CHS Alumni Thomas Revard who went pro but is no longer as an example. For the average person you have to put in lots of work training and getting your body to the form you need to stand a fighting chance.”

What are some of the benefits of competitive cycling? “General life is just easy. It makes you incredibly aerobically fit so daily tasks are just easier. The rest are both benefits and detriments, in that my tan lines are razor sharp. My upper body is also spider-like while my legs are pretty bulked up.”

How is competitive biking different from just recreationally biking? “Well one could make the argument that the only difference is that you race your bike. There are people who race and do very well on cheap bikes, and people who ride just for fun on the best stuff money can buy. There’s also people who ride recreationally who still train constantly to be faster. It’s just that in competitive cycling the equipment is a bit better and the people spend a lot more time training and are faster than their recreational counterparts. That’s certainly not a rile though, any recreational rider can go sign up for their local novice race whenever they want.”

What lessons have you learned from being a competitive cycler? “I think one of the main things is a better ability to push myself. Being able to just grit your teeth and pull a little bit more of yourself out and go that little bit harder to do what you need to do is a very important ability in my life. Also similar to that, is knowing that when you’re hurting or struggling in a race, everyone else is struggling just as bad if not worse.”

How has being a competitive cycler affected your daily life? “It’s made it so I’ve had to put lots of my life aside. Having to schedule training and racing around work, school and social life is a constant struggle and leaves me exhausted often.”

How has this pandemic affected your training for competitive cycling? “Quarantine has made training very hard because there are very few races left, so just finding a reason to get out the door and put in the work for something that will most likely be cancelled is very hard. Although as racing is coming back it’s been a bit easier to get out the door. I had a bit of a burnout over the winter but seeing how it’s impacted my race results has really been the kick I needed to get back on the horse and keep pushing.”

How often do you train for competitions? Training lasts all year. The time depends on (the) time of year and what I’m going for. Normally it’s 10 hours per week but sometimes more, sometimes less. For example, if I’ve got a big race coming up I’ll do less so my body can fully recover, whereas in the winter I’ll sometimes do 15 hour weeks just to get as much build up as possible while there’s no races to be rested for. Intensity also changes a lot. A 10 hour week of hard interval workouts is far different than 10 hours if just easy endurance cruising.”

What is your favorite part of being a competitive cycler? “The adrenaline. There’s little more hair raising than riding with a pack of 40+ people, all on the edge of their physical limit and doing everything they can to get the best results possible Oh yeah (that’s)  something to 4 and that’s that most people don’t really know what bike racing is. Most of the races in America are criteriums which are essentially a short course, generally less than 1/2 mile that’s raced around for a certain amount of time with the first across the line winning, with various prizes and stuff thrown in to spice things up. The long mountain climbs most people think of when they see Lance Armstrong are few and far between in the U.S. due to the low popularity of the sport, although it’s very popular in europe. Also it’s both a team and solo sport. At the amateur level a solo rider can win, but watch any pro race and nobody wins without a huge team helping them constantly.”

Visit this website to learn more about competitive cycling: //usacycling.org/get-involved/find-support 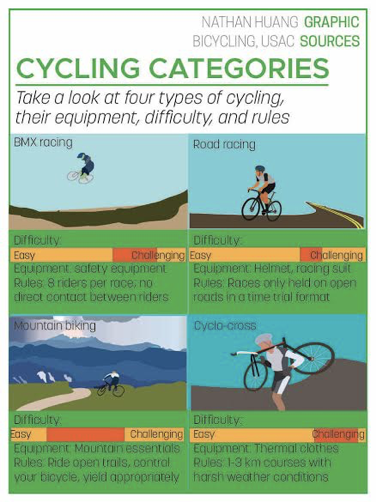