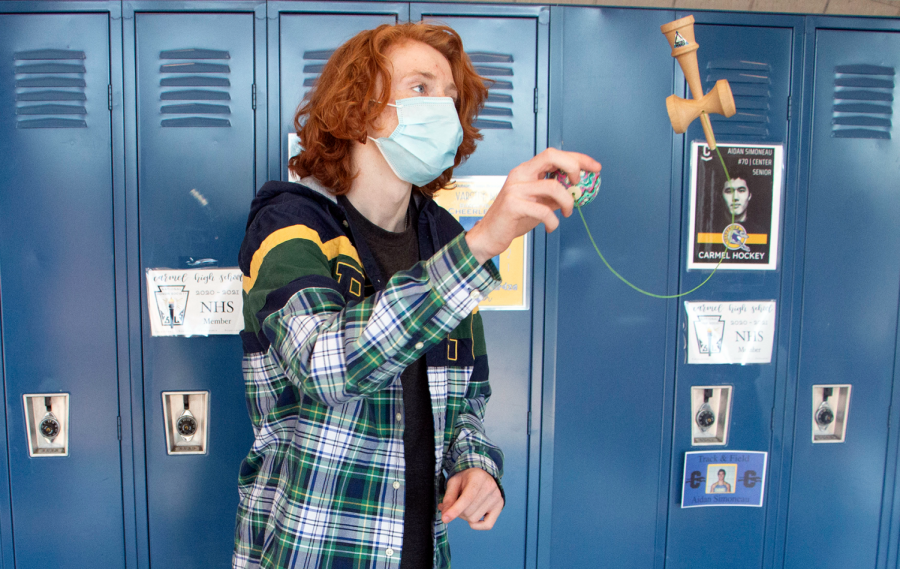 Could you explain what kendama is?
It’s basically a Japanese ball and stick game. There’s a “ken,” which has three cups on it, a bottom cup, and then two side cups, and then a spike. And then a “tama,” which is the ball, and then there is a  hole so you can put it on the spike.
How did you get into kendama?
It was at my Bar Mitzvah. I went to Colorado and I met the kendama world champion, Bonz Atron. He worked for my cousin at a hotel and his leaving party was at the same time as my Bar Mitzvah. He had an extra kendama, so he decided to give it to me, which made me more interested in kendama.
Do you have any advice for someone who is getting into kendama or just wants to practice?
There (are) tutorials all over YouTube, if you have a specific trick in mind, but learning the basics first is super helpful. I’d say the main thing is just getting the basics down, being able to get it in a cup every time and being able to spike it all the time.

Is there anything specific about kendama that makes it enjoyable to you?
It’s kind of a relaxing thing (to me). I feel like a lot of people enjoy kendama because it’s a freedom of expression. There’s so much that hasn’t been done and there’s so many different styles to it. It just frees your mind of everything else and you can do it with friends or by yourself.
Do you think kendama is something you’d like more people to do?
Yeah, when more people are involved, more people are going to like it. There are definitely times where I just kind of stopped playing for a couple months because nobody else is doing it. More people should definitely try it. It’s super fun. There’s just so much you can do with it.
Are there any specific skills that you need for kendama?
For the most part, it is a lot of practice. I think (some) people can go into it and be better than other people just from having some previous hand eye coordination. The best people always practice the most.