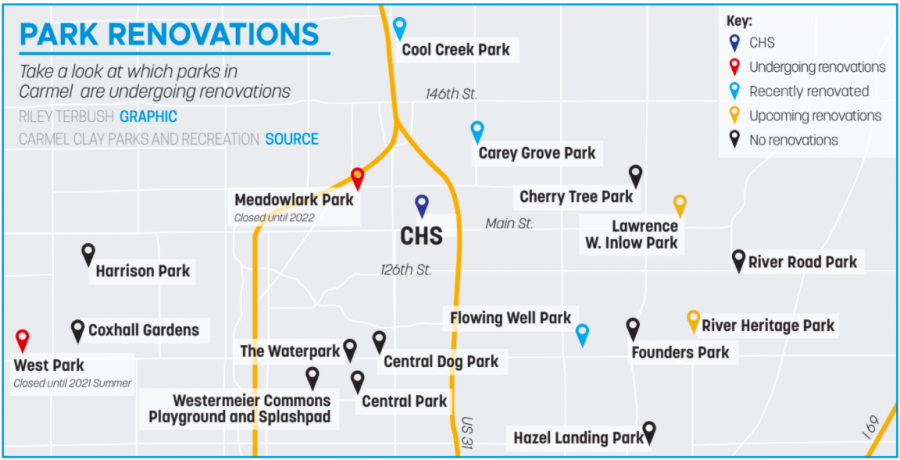 According to Michael Klitzing, Executive Director of Carmel Clay Parks & Recreation (CCPR), the CCPR Board voted to accept a donation of 63 acres of land to build a park near the southwest corner of 146th Street and River Road.

“While the Park Board formally accepted (the) donation of 63 acres for the future (park) at the April meeting CCPR does not yet own the property,” said Klitzing. “Before (the) title will be transferred to CCPR, we are completing an Environmental Study to validate there are no contaminants on the property that could be harmful to future visitors. We anticipate taking title to the property before the end of October.”

The site primarily consists of open meadows and has approximately four acres of woods along its western boundary. Klitzing explained CCPR plans to use this land for a new park named after Thomas Marcucilli, the late father-in-law of the land donoAccording to Klitzing, Carmel Utilities will develop two wellheads and a pipeline for the future park.

“Carmel Utilities has committed to developing the wellhead structures as observatory stations overlooking the park’s natural areas,” Klitzing said. “The route of the pipeline will be developed as a trail, providing an opportunity for the public to experience and use the park before formal development by CCPR.”

As part of the program, CCPR is also renovating current parks as a part of their Reimagining Parks initiative. According to Klitzing, CCPR received nearly $30 million for park-related improvements throughout the community. With the funding, CCPR is updating seven existing parks to make them safer, more accessible and available year-round.

“As part of our 2020 to 2024 Comprehensive Parks and Recreation Master Plan, we developed a life cycle asset management plan, which included condition assessments of all parks, facilities, and amenities within the park system,” Klitzing said. “The life cycle plan also projected when Carmel Parks would need to make major repairs or (replacements) of the amenities within the parks. The current renovations are based on (these) recommendations.”

In a press release, CCPR Assistant Director Kurtis Baumgartner said even though Carey Grove Park was the smallest park receiving updates under the Reimagining Parks initiative, it received the most feedback from Carmel residents.

“Carey Grove Park is located in the middle of several neighborhoods, so it receives a lot of traffic from surrounding families, and they’re invested in the park’s future,” Baumgartner said. “What we’re aiming to do with all of these Reimagining Parks projects is create spaces people want to continually visit to make memories that will last a lifetime.”

Flowing Well Park, located at 5100 E. 116th Street, also recently reopened from renovations on April 30. The upgrades to Flowing Well Park include the restabilization of Cool Creek’s banks, accessible restrooms, expansion of the parking lot and updated signage and trails.

“One of our core values is ‘planning for the future’, and we want to invest in our land and amenities so that they are here for years to come,” Baumgartner said. “Our Reimagining Parks initiative allowed us to invest in this park to manage the land and ensure we provide quality habitat for our wildlife as well as quality experiences for our park visitors.”

According to Klitzing, one park currently undergoing development is West Park at 2700 W 116th Street. He said CCPR is anticipating renovations to be completed in December. According to the CCPR Board, the main entrance, lagoon boardwalks and original parking lot will remain closed until the project is completed. However, the Jill Perelman Pavilion entrance has been built and will remain open, providing access to the new playground and northern trail system.

“The renovations were inspired by input we received from students at West Clay and College Wood Elementary Schools, which are located adjacent to the park,” Klitzing said. “This project will also provide (an) expanded parking lot to accommodate demand and a new connecting road between the original portion of the park and the new Groves section.”

Evelyn Evie Taller, junior and Girl Scout, said she is excited for the renovations to be completed.

“I think that the renovations are a good thing because a lot of the (park) playgrounds are starting to show some wear and tear,” Taller said. “I think it’s a good idea (CCPR is renovating) because they’re making playgrounds safer for kids, and also some of the new ones are really cool.”

As a Girl Scout, Taller also said she believes it would be good to add more natural aspects like trees to the new donated land and current parks.

“I do wish they would put more trees in…convert some of the parks to more nature with walking trails,” Taller said. “To add on, with the Girl Scout perspective, I think it would be nice to have some more nature areas because there’s several badges that focus on nature stuff and it would be good, especially for younger girl troops, to be able to do it somewhere close to home instead of having to drive for a while with a bunch of elementary schoolers.”

Klitzing said, “Each of the parks, once renovated will be like new, creating new opportunities for residents to experience.”