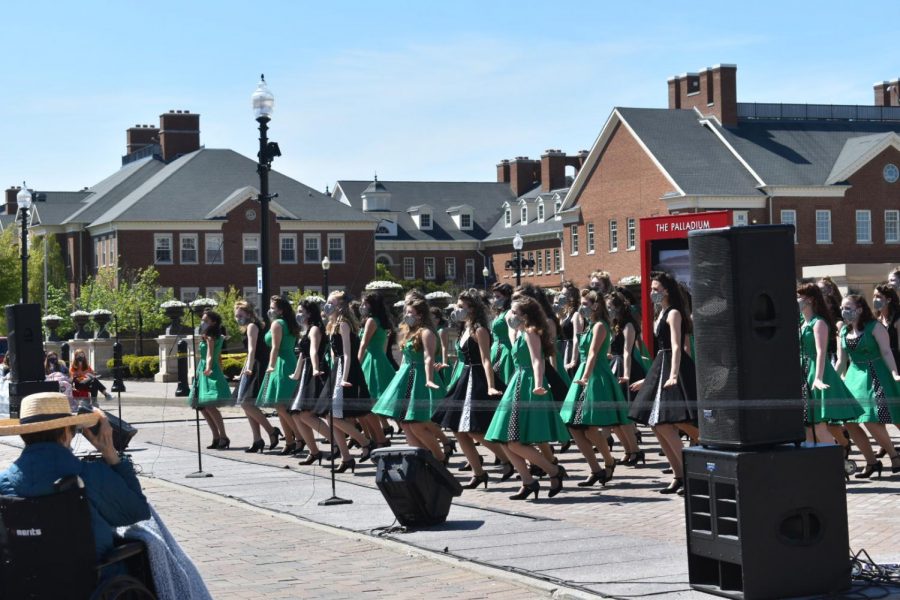 Accents members perform live for the first time this year at the Palladium on April 25. Due to COVID-19 restrictions on auditorium capacity, the Accents held this event outdoors.

On April 25, the Accents choir group performed at the Palladium, the group’s first live performance this school year. Accents, along with the rest of Carmel Choirs, has been recording their concert pieces as opposed to performing for audiences due to social distancing precautions. Alexa Walquist, member of Accents and junior, describes some of the setbacks for the group this school year.
“The choir department has been working extremely hard to make this year as normal as possible for everyone,” Walquist said. “For the choirs that are able to hold rehearsals outside of school, we have just been learning our material in cohorts and then cleaning it when we all come together. For choirs that aren’t practicing outside of class, the first time they sing with their other cohort is usually the day of recording, which is definitely a challenge.”

Kathrine Kouns, lead director of Accents and co-director of Carmel Choirs, said she is proud of the students’ attitudes despite having an abnormal year in choir.
“The students have actually done a really remarkable job. Under the circumstances, they would have every right to be discouraged and unmotivated, but they have truly risen to the occasion and have rolled with the very harsh punches that they have been dealt,” she said.
Paige Walker, sophomore and Accents member, said missing out on competition season was the biggest loss for choir this year, but there were still silver linings to be found.
“A lot of us were disappointed to not be able to compete, but we recognized that not competing doesn’t make us any less of a team,” Walker said. “One way we definitely adjusted was not going through the usual hectic nature of preparing for a competition season and instead preparing for our show in April.”
Kouns added that there were a few upsides to having smaller class sizes and doing recordings.
“With smaller classes, some of the students have been able to develop relationships with people that they may otherwise not have even known were in their class. We have also had the opportunity to record our performances and therefore reach a wider audience making it possible for friends and family out of town to see the shows in an easier way,” she said.
Walquist said she has a different take on the matter.
“This is my first year in Accents, but I would imagine the group isn’t as tight knit as most years simply due to not having as many rehearsals or events that everyone is at at the same time, but we still look forward to seeing each other every Monday night rehearsal, it’s unfortunately just not as often as normal.”

With this year with cohorts and a lack of an audience, Kouns wanted to have at least one chance for the group to perform live for an audience.
“I really just wanted them to be able to get the chance to perform for a live audience,” Kouns said. “We knew that based upon COVID restrictions that would likely be only able to happen outdoors. Here in Indiana, that meant waiting until the weather warmed up. I have a good partnership with the great American Songbook Foundation and the Songbook Academy so I reached out to find out if we could collaborate. It seems like the perfect year to do something that really was unlike any other year. If we had tried to duplicate our typical competition here, they would have likely been disappointed. I just thought that maybe getting a completely different direction was my best bet.”

Walquist said that the set for the performance strayed from a normal Accents performance.
“Our set wasn’t a traditional competition set where we are all on stage for five songs without stopping for 15-20 minutes. Mrs. Kouns created a 45 minute show where the Accents performed a group number, and then other Accents had the opportunity to perform a duet or small group number that they practice on their own. All of the music is based from the 40s, and the dancing was inspired by the ‘swing dancing’ (that was popular during the time).”
Kouns said she was more than thrilled about seeing the group perform live for the first time this year.
“It was exhilarating. It was so much fun to finally see the reactions on the faces of an audience and such a great opportunity for the girls to share their gifts and talents with our Carmel community,” she said.
This year has been unorthodox for the choir department, but many like Walker remain hopeful that groups will have more experiences next school year.
“My biggest hopes for next year would definitely be to be able to do all of the activities we had to miss out on this year, such as competitions and our retreat. However, my biggest hope is that I’ll be able to safely be with our entire choir next year.”