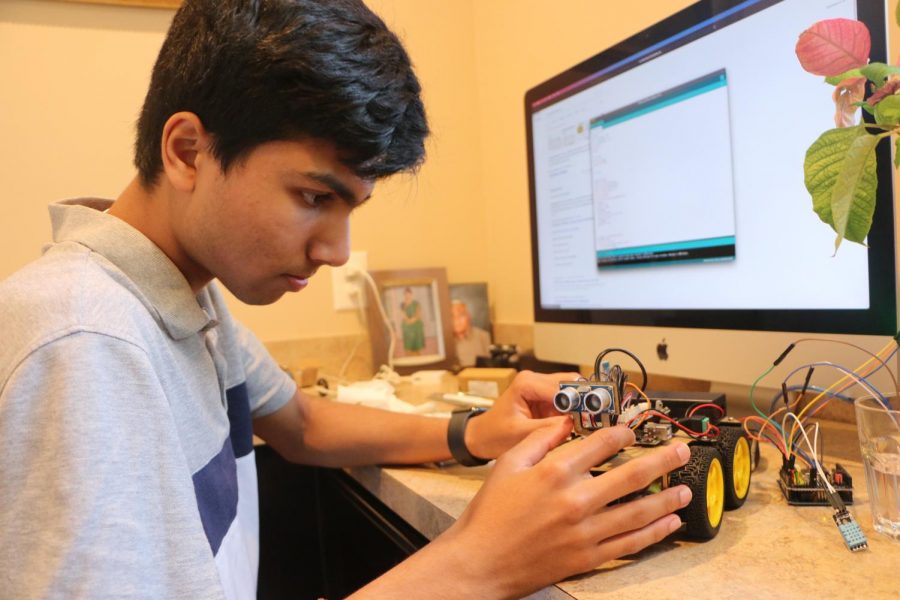 “Later means never.” That was what the poster said that inspired senior Kashyap Akkinapally to finally turn the idea of Innovation Club in his head into a reality. He walked by it every Gold day on his way into math class.

“And I was like, ‘Oh. If I don’t act now, and if I don’t make this club, I’m never going to make this club. So one week after I saw it continuously. I was like ‘oh let me start working on it now,” he said. “ I’m really passionate about being able to combine my interest in engineering and medicine, to be able to better help the general population with people with disabilities.”

And that’s what he did. Innovation Club has entered the SourceAmerica IDEATE (Imagine, Design and Evaluate Assistive Technologies for Employment) competition, which challenges student participants to partner with disabled people in their community to create technologies to help people with disabilities succeed in the workplace. The club’s current project seeks to make canes for the blind easier to carry and use by making it about the size of a TV remote with electrical components.

“The blind stick really is a huge foldable stick, and it’s been out for 100 years. And so, me and our group were like ‘okay it’s been 100 years, nothing really has been done to really shorten it or enhance its function.’ Because really, it’s just a stick, there’s really not much technology, and much of the enhancements that have been done to improve the blind stick have been environmental, such as having a recessed area right near sidewalks,” Akkinapally said. “And also… cell phones were such a big thing. They were so huge, and then they all condensed to fit inside like a small pocket and such. So me and our teammates, we found a way such that we can condense it enough such that you wouldn’t require them to constantly be tapping diagonally, but they would just hold it in their hand, and then through some of the electronic components that we’ve been working on currently, [they could use it to find their way].”

Akkinapally and his club aren’t the only ones innovating to help their community. Seniors Nate Frank and Pol Berger, co-presidents of the InvenTeam, worked throughout the last school year and summer on a collection of projects ranging from agricultural to medical, and are currently working on a project to help improve teens’ sleep by stimulating melatonin production.

“Innovation is taking an existing solution and improving upon it, and that sounds kind of basically you’re just stealing someone’s idea and maybe adding another monitor or another data point, but the thing that is super important is that you need innovation as the world changes,” Frank said. “For example, our growing population needs food, and you know it’s always been a concern… but human innovation in agriculture and irrigation has always been one step ahead of that population growth.”

Wendy Bass, Innovation Club sponsor, has stood witness to the innovation of students like Frank and Akkinapally, but also said she tries to find ways to innovate in her own life and work as a math teacher.

“I think for many people innovation is all about machines and gadgets, but to me, it’s as simple as thinking outside normal processes and finding ways to improve life and routines. I regularly apply this personal definition to my life and work. I am a very reflective person and am always looking for ways to improve and modify what I’m doing,” she said.

Akkinapally and Frank said they try to apply the innovative mindset outside of competition as well. Akkinapally said he enjoys building things at home such as Arduino circuits. Frank said he found himself using skills he developed during the process of innovation in other parts of his life.

“That’s kind of a thought process that everyone, ideally, has — being able to anticipate things,” Frank said. “Innovation is in a literal sense improving upon something that already exists, but you can still take that mindset of innovation to school or to you know work and say like, ‘okay, we’re low on this product I should probably stock it’ but that’s not innovation. So, taking what I’ve learned — I’ve become more diligent and I’ve become more understanding of the world around me, but I don’t necessarily apply the same mindset to life as I do to these innovation competitions.”

But whether you’re innovating in your day-to-day life or developing technology to improve the lives of others, Frank, Bass and Akkinapally agreed that innovation is important.

“I think many [students] have so much on their plates that they don’t reflect and ponder very often. Their schedules are so full they simply move on to the next task as soon as they’re done with the current one. Fortunately, reflection is a skill that can be taught and worked into every aspect of life so it’s something I work on in class and have plans to incorporate more of this school year,” Bass said.

“We’re making things constantly better. And really one of the things that is one of my core values is [that], regardless of how big my changes, I want to make small changes into everyday things that you see,” Akkinapally said. “Small changes over a large period of time [become] a way bigger change.”