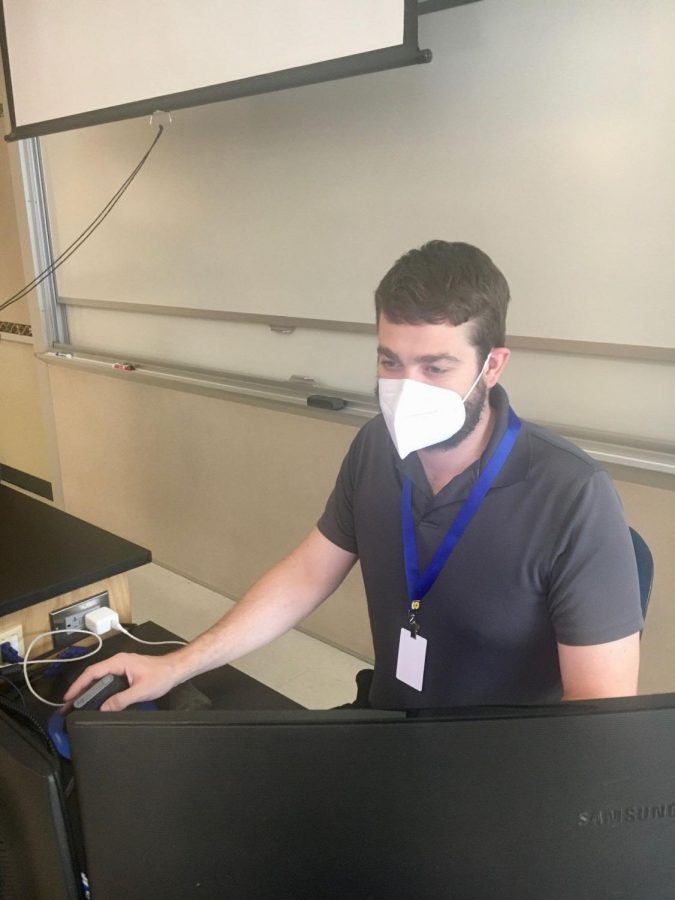 Club sponsor James Hambley sits at his computer, grading. He said he is looking forward to the upcoming Quiz Bowl year.

Quiz Bowl prepared for the start of another year of the tournament by hosting a call-out meeting on Aug. 30 at club sponsor James Hambley’s room, H213, and attending the CHS Club Fair. Quiz Bowl, described by Hambley as resembling team Jeopardy, and by Akash Bhowmik, club president and senior, as similar to CHS’s own SRT Brain Games tournament, is a series of competitions that CHS’s team has participated in since 2018. The CHS teams compete against high schools both local and across the country.

“It is very easy to find an enjoyable subject to study in Quiz Bowl due to its interdisciplinary nature,” said Bhowmik. “The earlier one starts, the better.”

“The positive is that there’s something more tangible, more concrete about being in a room with a buzzer system against your competition,” he said. “But the negative is that I drive the activities bus, and we can only take two teams to those tournaments, whereas on the online tournaments we’ve been able to have three or four teams.”

Bhowmik plans to conduct tryouts for the A, B, and C teams to assess new and returning interested students over the next few weeks, in addition to examining past competition performances for returning members. He is also considering adding a D team to the club lineup.

“I believe we have a very promising future for the Carmel Quiz Bowl team,” said Bhowmik. “As we had a substantial number of new freshmen and sophomores indicate interest at the callout and club fair. Given that many of our top players are seniors this year, we are excited to see that the Carmel Quiz Bowl tradition of success will continue to live on next year with this new talent. We will spend the next couple weeks working with our new members to get familiar with Quiz Bowl studying and the game format.”

In addition, he said the club is currently organizing logistics for the first couple of tournaments this school year, such as the Indiana Kickoff, Beavercreek Fall Invitational, and Detroit Academic Regular Tournament. He plans to have the teams practice for side events as well as the national events.

Last year, the team finished eight out of 224 teams at the 2021 High School National Championship Tournament. According to Bhowmik, they are aiming to have a top five or even top three finish at the National stage. Hambley said that they are setting themselves up for this by entering a plethora of challenging tournaments against some of the most victorious teams in the country. By Claire He