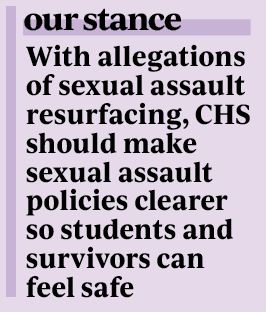 On Sept. 9, the CHS administration sent out an email to parents and staff to make them aware of a situation on social media concerning students. This email came amid dozens of sexual assault allegations on social media, with many alleged victims coming forward with their stories and the names of their abusers. Many of these posts spread rapidly across various social media platforms, calling attention toward an alleged pattern of abuse among students at this school.

In the school’s short statement, administrators said they were working with students affected by the posts and that students must use more “appropriate” reporting methods when making allegations of sexual assault. While this statement was effective in providing better methods for victims to receive the school’s assistance, it lacked the context and empathy necessary to handle these types of situations. 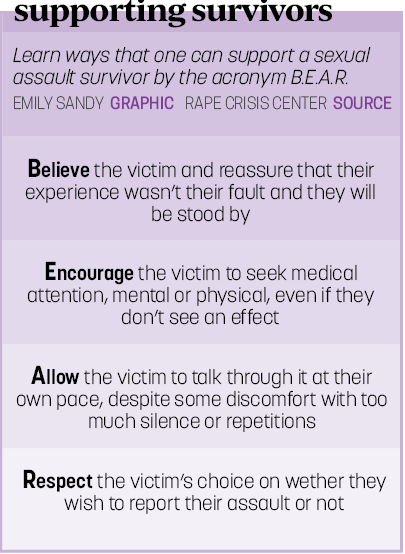 For example, many parents and staff members were unaware of the events under investigation, as the message only described the posts and allegations as “a situation occurring on social media.” Additionally, the administration should have been much more explicit in saying that they do not condone sexual assault of any kind and will support all students in need.

However, this situation sheds light on a much larger issue regarding victims of sexual assault in schools coming forward with their experiences. According to the U.S. Department of Education, schools have reported over 15,000 total incidents of sexual violence, which is a 55% increase from just five years ago. These official reports find that many schools make it difficult for students to come forward, and a majority of schools fail to properly report incidents of sexual harassment when they occur. As a result, the American Association of University Women finds that fewer than 20% of female students who experience sexual assault report it to authorities.

A few years ago, a student at CHS researching student and staff knowledge on sexual harassment policies found that many of the same issues persisted at this school. In their research, they found that more than half of CHS students said they were unaware of the school’s sexual harassment guidelines, leaving them unaware of policies that could enable them to protect themselves.

To be clear, the administration has a strong policy for victims of sexual assault that involves systematic approaches to investigate the situation, bring victims to justice and give them the mental and emotional support they need. But while staff members may have a strong understanding of the proper steps to take when an instance of sexual assault is reported, the administration must make sexual harassment policies transparent to ensure students feel comfortable coming forward.

All in all, sexual misconduct creates an unsafe and unwelcoming educational environment and can interfere with learning and impact students’ mental and physical well-being for years to come. By making an effort to educate students on how to keep themselves safe, condemning all acts of sexual assault and providing support to victims in need, CHS can make this school a better learning environment for all students.