A Change of Scenery

Choir members learn to deal with challenges, change in location for upcoming performances 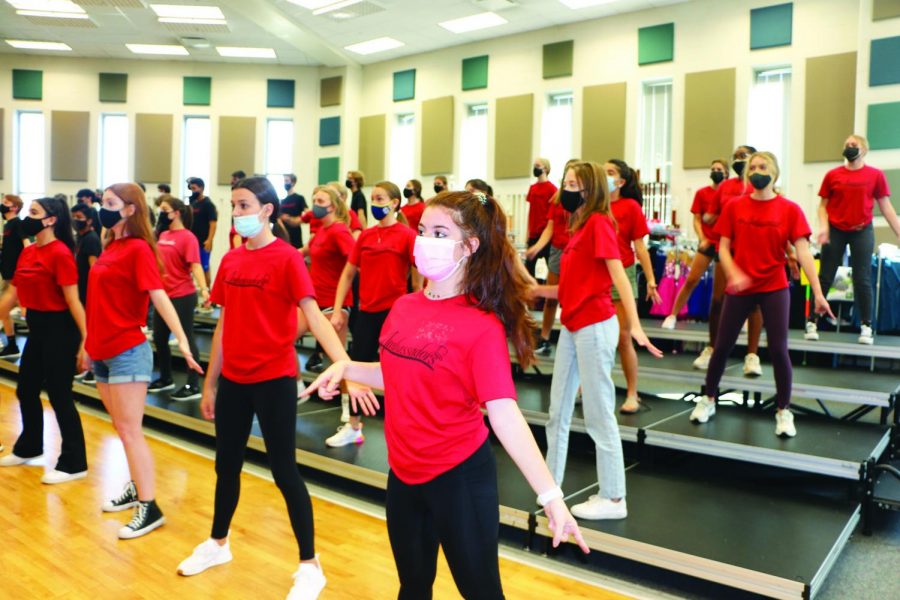 Creative Choreo: The Ambassador choir members practice their routines in a gym. The fall performance will be on Sept. 29.

Due to ongoing changes to the performing arts wing, the choir program has had to make adjustments on how they run rehearsals.

Director of choirs Kathrine Kouns said without the auditorium space available, performance space options have become limited. And with the fall concert scheduled to take place on Sept. 29, the choir program will experience these adjustments very soon.

“We are having to have most of our concerts in the varsity gym. The gym is okay, but, obviously it’s  made for sports and athletics and it’s not really made acoustically or visually for the performing arts,” Kouns said.

According to Kouns, in addition to relocating many performances into the varsity gym, the annual Holiday Spectacular performances that are scheduled for Dec. 7 to 11 will be performed at St. Luke’s United Methodist Church.

“We had to rent that facility to be able to find something that would work,” Kouns said.

While students are used to performing in the auditorium, having performances in the gym will come with a variety of challenges that the program is not used to.

Arianna Brown, member of Ambassadors and junior, said, “I, personally, am not very excited about performing in the gym. I don’t really know how it’s going to work logistically, but I’m sure it will be alright.”

The choir program itself isn’t the only program having to rearrange its plans for the concerts. The technical theatre program is also working through the new performance location and having some challenges along the way as well.

Abigail “Abby” Ingersoll, secretary of the CHS chapter of the United States Institute for Theatre Technology (USITT) and sophomore, said, “(For concerts in the gym), we have to go and set up all of our stuff and then tear it down afterwards. So we are going to be here really late. We have to hang up all of our lights and set up everything. It’s going to be a lot of work.”

Despite the amount of time, effort and flexibility these renovations will take, students and teachers said they are excited to see the end results, which include the addition of an updated auditorium and Studio Theater, new classrooms and new rehearsal spaces.

The last time many of the performing arts department rooms had been through significant renovations was as far back as 1994. According to Kouns, the department is excited to breathe some new life into the space.

“The auditorium is going to be great for us when it’s totally done,” she said, “The seats will be new, the curtains will be new, a lot of the sound and lighting will be brand new. It should just be a much more state of the art kind of place to perform… Kind of like any renovation, even if you did it on your house, I’m really excited about the outcome, but of course the process is not always very fun.”

Brown said she is also thrilled to see the finished product. She said she is upset, though, as she really won’t be able to spend much time in the newly renovated space.

“I’m kind of sad that they are starting it when I’m in the middle of my choir years because I’m not going to get to experience it fully. It’s going to be finished when I’m a senior,” she said.

As these major renovations are set to be completely finished by the end of 2023, many upperclassmen said they feel the same way as Brown because they are going through the tough changes but not getting to experience the payoff at the end.

All in all, students and teachers in the choir program and tech theatre program said they are to work hard to put on successful performances this year in the face of these major performing arts renovations. Changes in rehearsal and performance locations may not be ideal, but they said they will work for the moment and said they are eager to see the finished product.

“I wish I could wave a magic wand and make it go faster, but I don’t have the power to do that,” Kouns said, “So, we just have to be patient and hope that it all turns out the way that we’re hoping in the end.”