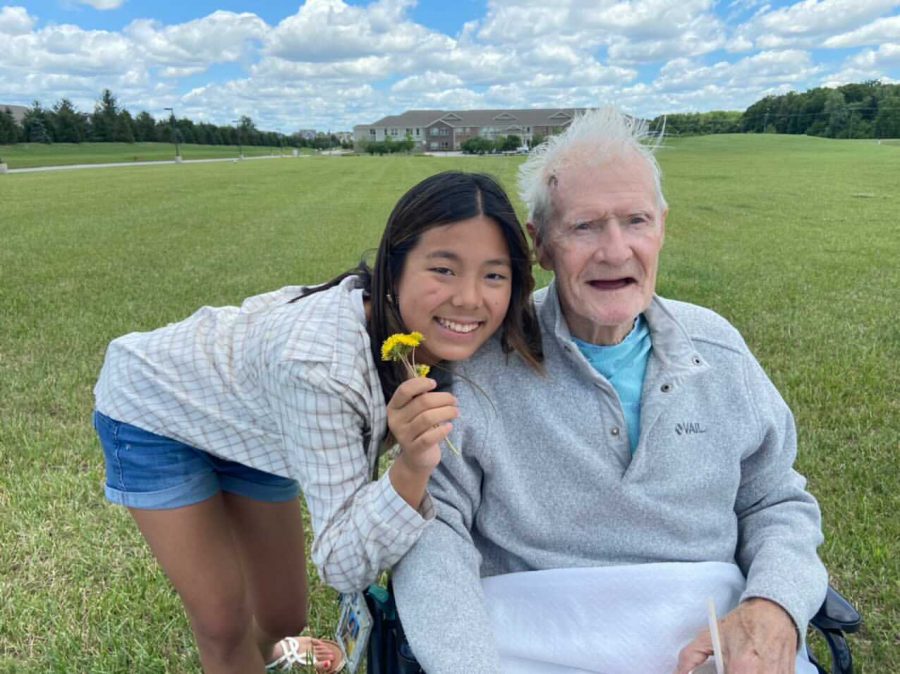 Junior Katie O’Daniel poses with her grandfather outside of their home on the yard. She said she likes the family aspect and increased time she gets to spend as a family because of his presence.

It can sometimes be challenging to be part of the sandwich generation, according to sophomore Bailey Oehler.

“The negatives is the age gap sometimes can be really hard to deal with because of the different views and opinions.”

Oehler’s mother, who takes care of both Oehler and her grandpa, has to work a little differently than parents who only take care of their children. This addition to the family can be positive and negative in many ways for each generation.

The term “sandwich generation,” coined in 1981 by two social workers, refers to families in which one must take care of their own children as well as their elderly parents. According to Pew Research Center, an ongoing survey conducted in 2012 showed that 47% of adults between the ages of 40 and 59 have a parent who is from 65 or older and are taking care of their own children.

But not only does this situation affect the parent, it can also have an impact on the child. According to the T. Rowe Price 2019 Parents, Kids & Money Survey, kids can also feel the stress of financial strain in the sandwich generation, ultimately causing long-term financial impacts. The survey showed that 70% of kids with a parent who are dealing with an aging family member are more likely to spend their money right away.

Like Oehler, junior Katie O’Daniel also lives with her parents and a grandfather.

“With Grandpa living with me it was super hard the older he got, there’s times I would blame myself for where he was at. It affected my mom so much more than me though because watching someone who was once strong slowly getting weaker and unable to take care of themselves can be sad.”

According to counselor Casey Danubio, although having extended family can have a positive impact, it can be difficult for different family members to understand different generations and their activities.

“Some of the thinking is more old-fashioned for the students who are living in those homes,” she said. “They find it difficult to assimilate modern culture and some of the things we consider very normal to a teenager, having people in their homes that are more old-fashioned and adhere to stricter cultural standards that are from earlier times can be really challenging,”

“Because of this, there can be a frustration for students, parents and grandparents,” she added, “because they are all trying to work together to raise these children that all have values that are very important but maybe look a little different than what they want.”

Regardless of those difficulties, O’Daniel said her household is still tight knit, and her relationship with her grandfather is healthy.

“While there were difficulties having my grandpa live with me such as trying to keep him safe and making sure he won’t be lonely, having my extended family living with me has given me the happiest memories,” she said. “How much love and effort we put into keeping him happy brought my family together as well.”

O’Daniel said before her grandfather lived with her family they drove to do activities weekly or had enough time to drive around and just talk.

“But after he moved in,” she said, “we found that bonding with him really brought our family together.”

Along these lines Danubio said living with different generations can bring stronger relationships into the family.

“Many students that live in a home with multiple generations have a very close bond to their grandparents or aunts and uncles that they would have not been otherwise living in the same home being raised by them in some ways being closer to them,” she said. “They are closer to them and they know them better.”

Ultimately, both Oehler and O’Daniel said they know that although sandwich generations may have difficulties, in the end they still have a very close bond with their families. Oehler says that though it can be difficult adapting to different views in the family, living in the sandwich generation grants more time with extended family.

“At first it was a little weird when my grandpa first moved in with us, but we were so close to my grandparents that it didn’t change anything and now it just a new normal,” she said, “I think it is great because it forces you to be with your extended family which a lot of people take for granted.”