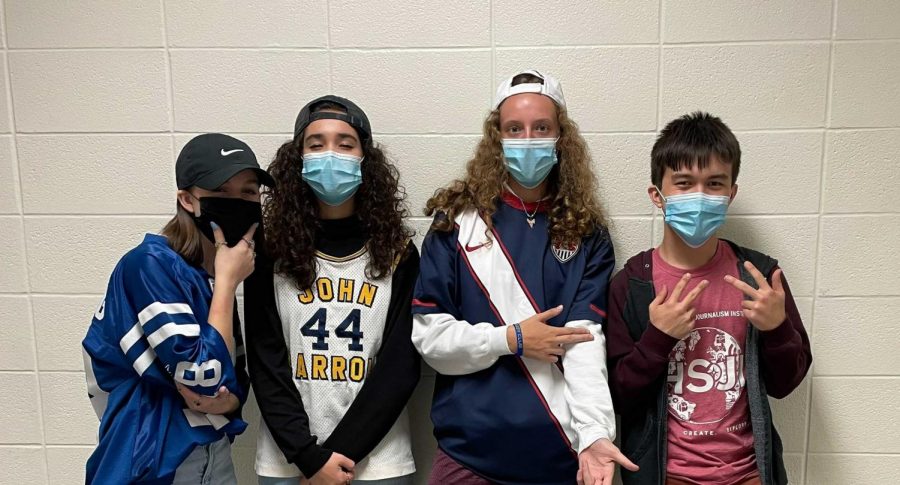 Hi everyone and welcome to Muse!

We’ve got a big crew this year that can’t wait to keep the ball rolling with MUSE. Instead of doing a simple introduction we thought it’d be best to switch things up a bit and review our favorite music videos, or whichever music video we seem to like this week, as a little intro instead. Without further ado, let’s get to it!

Hi everyone! I’m Jillian Moore, an Entertainment editor for HiLite. The music video for Brutal, by Olivia Rodrigo, is my choice because of its characterization and cinematic elements; Rodrigo is telling a story and making a statement with this video. Does it advertise filters that are essentially worthless to make the producers some money? Maybe. But the video also includes amazing fashion looks with references to the 2000’s pop punk era (see Avril Lavigne) and points out current issues regarding social media and beauty standards. I knew this would be well done from the beginning of the video, when Rodrigo, dressed as a ballerina, abruptly breaks her ankle on screen with the change in music tempo. The effect is jarring and immediately got my attention. From there, Rodrigo is pictured as different characters: crying social media influencer, advertisement model, frustrated girlfriend, burnt out high school student, elitist news anchor, bullied punk rock star and more. Filters periodically flicker on and off the actors’ faces. Every look is designed with connections to specific eras told through the perspective of the modern teenager trapped in a digital world. Whether the video is a cry for help or a call to action is open to interpretation. However, the music video clearly defines Rodrigo’s brand as an artist and is a must watch for future fashion designers, film majors and the American high schooler.

Hi all! I’m Christian Ledbetter, a content gatherer under Entertainment this year. I have to say my favorite music video has gotta be the music video for Labyrinth by Shinichi Osawa aka Mondo Grosso. Completed in a single shot, the video follows a brightly dressed woman dancing through the streets of Hong Kong, and that’s pretty much it. What really makes it are the colors, the streetlights are warm and the night sky first gives off a cold blue hue. Pair this with what seems to be a marketplace, a cluster of apartments and the inevitable neon McDonalds sign and there is an almost dreamlike atmosphere. The dancing itself seems almost nonsensical. In one sequence her hand rubs off her arm before allowing her fingers to crawl back up it, she spins, puts her hands in her pockets and jumps a few times before sliding to her left. It’s completely hypnotic and sure, some could argue without substance, but style isn’t easy.

Hey guys! I’m Maddie Misterka, the Cover Section editor this academic year. I’d have to say that my favorite music video is for Matchbox Twenty’s How Far We’ve Come. I’m not a big music video person, so while the video is well made that’s not the only thing that does it for me. Starting out black and white, the video showcases historical imagery, slowly fading color in as it grows closer and closer to modern day.  The post-apocalyptic energy of the song contrasts well with the meaning of appreciating growth, and I feel like it could be appreciated at any time in history. Whenever I hear the song I feel nostalgic for all the time I’ve let pass by me, and the video really finds a way to heighten that emotion. The 20th century visuals alongside such a timeless song compels the viewer to do some self reflecting, and hey- existential crises are always better when paired with good music.

Hi guys! I’m Riley and I’m an Entertainment editor for the Hilite. My favorite music video would most definitely be What I Need by Hayley Kiyoko ft. Kehlani, although if you asked me on another day I may say Motion Sickness by the amazing Phoebe Bridgers (queen!!). But for the purpose of this review, I would have to say What I Need simply because of the emotional nature of the setting, the people in the video (Hayley and Kehlani) and the swag music behind it. The video starts out with a fight between a mother and daughter (aka Kehlani) about her decisions and sexuality, and quickly escalates to the daughter running away with her girlfriend, Hayley. The video mainly shows them joking around and having fun, but there is a scene where their relationship hits a rough patch. Luckily, as shown in the video, Kehlani is able to give her partner, Hayley, what “she needs” out of the relationship, as the title would suggest. Both the music video and song behind the video seem to center around the idea of being sure of what you want, both for yourself and out of your partner, which I admire. All in all, the music video is a visual masterpiece that shows the fun loving and serious sides of relationships, and that’s what makes it my favorite.

Hi! I’m Darshini and I’m a sports section editor for the HiLite. My favorite music video of all time has to be Look What You Made Me Do by Taylor Swift. It’s absolutely symbolic to any Swiftie. It was the perfect introduction to her Reputation album with Taylor being a zombie in the opening scene, coming out of a grave that reads, “Here Lies Taylor Swift’s Reputation.” However, even more of an opening to her album were the iconic lines, “I’m sorry, the old Taylor can’t come to the phone right now. Why? Oh, ‘cause she’s dead.” She truly opened a new era. And on top of that, she managed to bring together all her past eras at the end of the music video, mocking them in disputes. Aside from debuting her Reputation by indicating that she had begun a new era, Taylor also managed to throw shade at all her enemies with hidden means in many of the lines, particularly referencing her feuds with Kanye and Katy Perry (although the Katy-Taylor feud is old news not). But even stronger than throwing shade at her enemies, Taylor indicates that she has risen above events of her past with the symbolism of snakes. Despite being called a “snake” by her haters as an insult, Taylor Swift takes pride in the name and sits on a throne surrounded by snakes in the video.

Hi all! I’d have to say my favorite music video is “Bust Your Windows” by Jasmine Sullivan. I think I may be a little biased towards the video because the song is one of my favorites, but I like the way she really tells a narrative with the video. Even without the lyrics you can definitely tell what’s happening and I love that aspect. The video is a little outdated so the lighting and transitions could definitely use work, but I think for being released over 10 years ago it has pretty solid fashion choices and a solid backdrop. Before the song was used as a short lived but awesome tik tok trend, the video illuminated the girl power that is Jasmine Sullivan, including her amazing vocals and amazing sound. It is undeniably a great portrayal of an underrepresented star who gets her revenge and looks awesome doing it.

MUSE provides monthly curations of all types of arts, authors, and media. On top of author analyses, there’s also the occasional rant-filled review. We hope readers will always leave with a new piece of media to muse over. Click here to read more from MUSE.