Review: Over the Garden Wall and Atmosphere [MUSE] 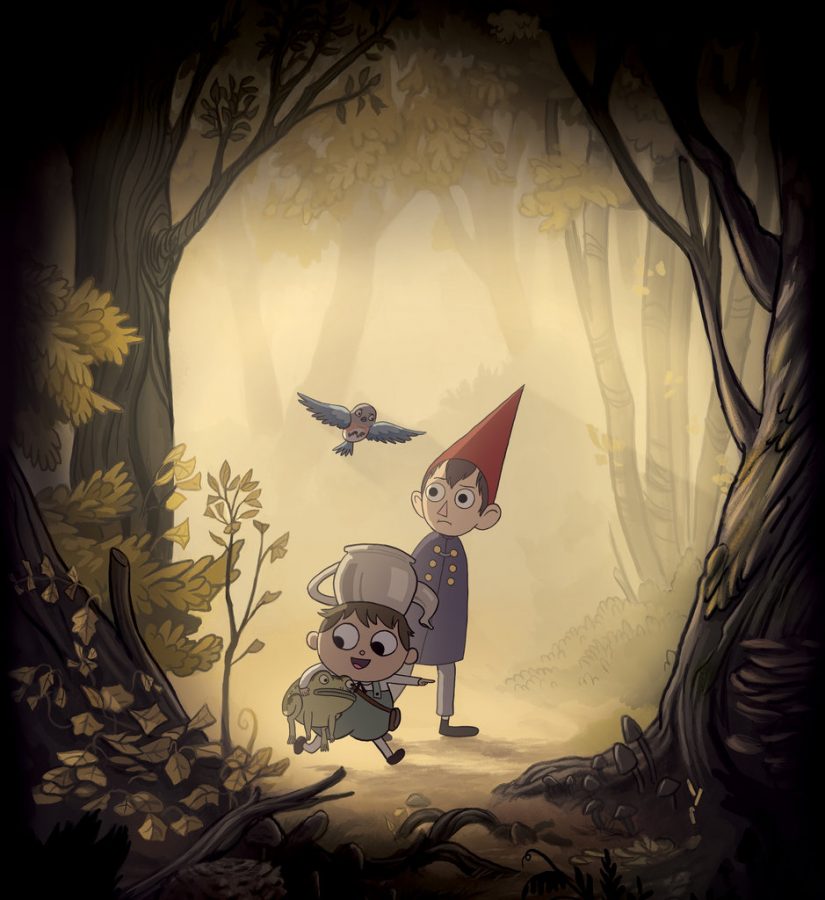 A promotional image created for the 2015 miniseries Over the Garden Wall. Here you can see the light fall colors that dominate the show as well as some goofy fairy tale inspired character designs.

In recent years a whole lot of cartoons have been released redefining and stretching what North American animation is thought to be capable of. Shows like Steven Universe, Infinity Train and more are often cited as evidence of a sort of “animation renaissance” raising the bar for mature storytelling and LGBT+ representation. For instance, season three of Infinity Train focuses on fascism and the tools that those in power use to create new societies and ostracize those who do not fit that society, heavy stuff for a kids show.

Near the start of this new wave in 2015 came Over the Garden Wall, a show I’m way too obsessed with, about two brothers lost in a forest, searching for the way home. It’s a super simple concept, but showrunner Patrick McHale finds ways to stretch and build upon it, to tell a captivating story about death, fear and storytelling in general in a measly ten episodes.

The best thing about Over the Garden Wall is everything it does to build its atmosphere. Several times the camera pulls away from the action, focusing instead on orange and brown leaves simply blowing in the wind. The backgrounds feature the sun peeking through the trees in light browns and soft yellows. That’s not even touching the music, a collection of late 19th and early 20th century folk and jazz styles. Everything works together to create a nostalgic early 20th century New England atmosphere. Even episodes announce the title with a title card not unlike one before an old Mickey Mouse cartoon.

This nostalgic, bygone atmosphere is riddled with a sense of dark mystery. A monster known only as The Beast and covered in shadow is said to roam the woods in search of lost souls. A woodsman living in an old grist mill wanders around cutting down trees for oil to light his lamp. People whisper about their connection, though no one truly knows. As a cartoon the show can’t rely on blood or jump scares or anything of the sort, instead you get rumors, shady things in the shadows and thanks to a bunch of strange occurrences, a feeling that something is off, though you of course don’t know what. The mystery of The Woodsman and The Beast, of this strange forest in general, is the haunting factor here, not some murderer waiting for the music to ramp up. It creates a, not scary, but certainly eerie feeling, at times even uncomfortable, as you are left to guess about these characters, and just what the heck is even going on.

Even in the finale where most secrets are revealed and the loose ends get tied up, the show still throws a few more mysteries, though I’m getting ahead of myself there.

The two brothers, Greg and Wirt, carry the show. Everything I described above probably sounds like some boring pretentious drivel, and without such great personalities it probably would be. Greg, the younger brother, is everything a younger brother should be, annoying, always getting into trouble, constantly joking though always somehow charismatic. Wirt, the elder brother, is the awkward pretentious poet teenager always trying out plans that seem smart but never quite work due to his own pride, though when it really counts, he’s a coward. Both play the straight men, calling out the strangeness of the forest, the music and magic, Greg with a laugh and Wirt with a whole lot of worry. They have wonderful chemistry and are such promising characters that McHale simply has fun toying with here and there, leading to a really satisfying and complete show, and that’s not to mention their guide through the forest, a bluebird named Beatrice, a wisecracking girl leading them to the lady of the wood’s, though she seems reluctant to do so as the series goes on. But why? Another mystery.

What makes Over the Garden Wall so magical is how familiar, yet fresh it all feels. With its classic hero’s journey setup, a grim eeriness and several callbacks to the classic animation of the 20’s and 30’s it garners a fairy tale feel, though it’s characters and conclusion feel oh so contemporary, it’s a magical example of a show familiar with the history of its medium, but ready to soar past it. It’s a great cut for our current renaissance, asking what a horror children’s show looks like, what it would do, what should kids know about fear and then jumping over those questions as if it were effortless. Which is what makes it so special, that someone dared to make a kid’s horror show that was actually about more than just pure terror. It’s great, new not for the sake of novelty, but to question and prod it’s audience. What is fear? What are people afraid of? Why? What is the power of fear? For a show to explore these questions is big, for a kids show to do it and do it well, whew.

It’s everything I love about this soon concluding movement, an important era of kids content that didn’t want to simply pass time, but speak on subjects even adults can struggle with. For goodness sakes, there are Dante’s Inferno references in it.

While this era is certainly ending with Steven Universe, Infinity Train and now the Owl House coming to a close, it helped us remember just what a few fresh faces willing to make some noise can do. That visual, musical and even dialogue styles can all be crushed together to create an atmosphere and just what that atmosphere is capable of.

Below you can watch the first episode of the series, thank you Cartoon Network!