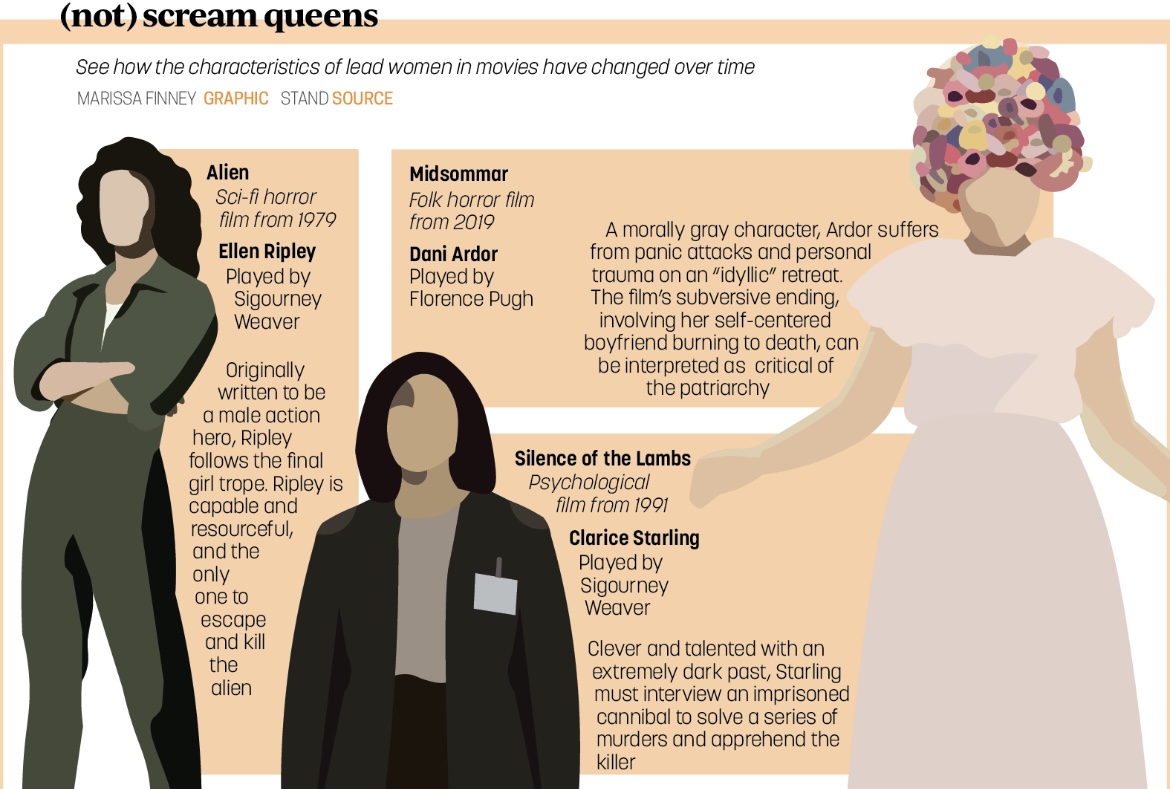 In the 1996 horror movie “Scream,” director Wes Craven references the common horror film tradition of killing off the majority of characters when he scripts Tatum, played by Rose McGowan, as saying, “No, please don’t kill me, Mr. Ghostface, I wanna be in the sequel!”

The archetype of the helpless female character, although not as prevalent today, is still extremely noticeable in the horror genre and in the cult classics many of us will watch this Halloween, according to Hannah Goeman, IB film student and senior. Goeman said she hopes to one day become a director and reexamine the male gaze and the clearly defined gender roles in the horror films.

They said, “I think we see this stereotype of the dumb blonde, especially in horror movies, and we assume that since she’s blonde and since she’s a woman, she’s going to die first, and that you’re going to have a big strong man come save the day.”

However, according to senior Gracie Kubek, female characters are gaining more independence and complexity as the genre evolves and the archetype of the helpless woman in horror movies is dying off.

“Since (movies’) inception there has been more of a push towards male characters having more agency and I think that’s especially true in horror films, where female characters as a whole tend to lack that agency. They’re either the last character standing who gets rescued or they’re the helpless one who gets killed off,” she said.

IB film teacher Jim Peterson said via email that women often default to the protagonists in horror movies. However, he said the damsel in distress trope is still present in horror and many other film genres.

On the other hand, Kubek said in many examples of horror movies women die first, no matter the intelligence of the characters’ choices. However, she said the increase in female protagonists reaching the end of the film in more recent horror films is an indication of changing gender roles.

Kubek said, “The film ‘Psycho,’ which honestly is problematic on a number of levels, features a female character who is killed off very quickly and her agency is almost punished. Whereas in modern horror films… There’s one that came out with Janelle Monet in it, ‘Antebellum,’ where the main character is a woman. I think the media is always going to reflect the attitudes of the society that it’s catering to.” 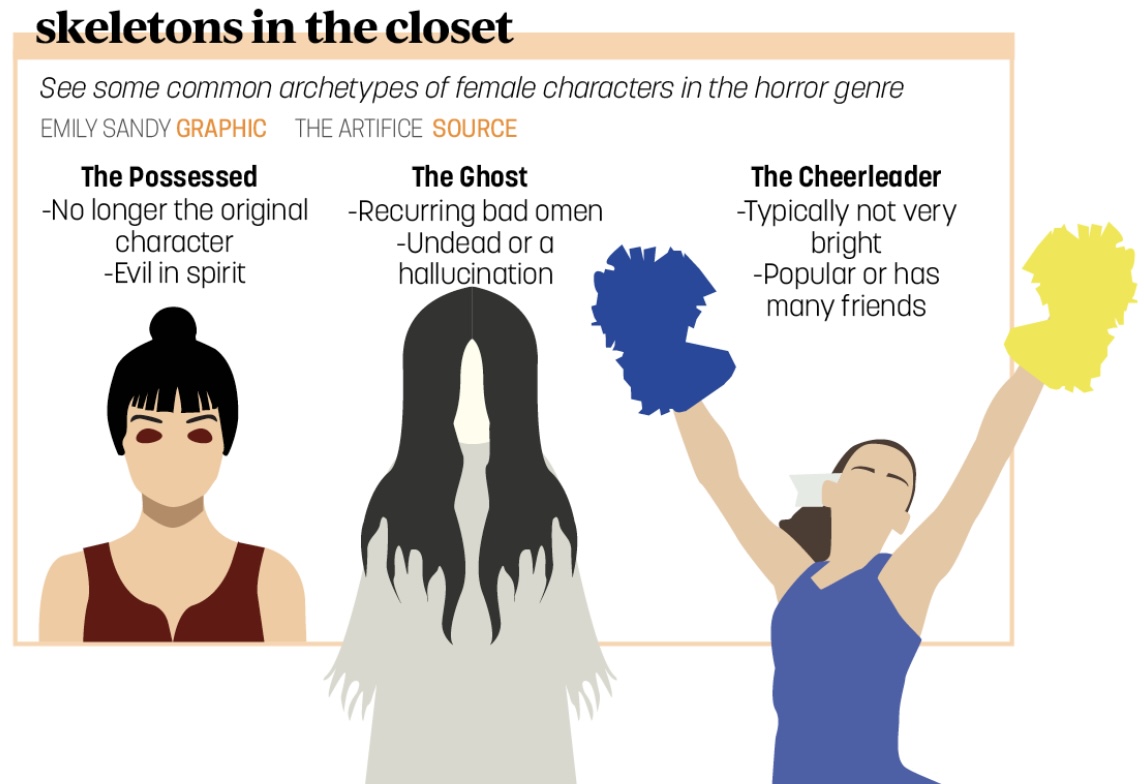 Goeman said the most obvious change in gender roles in the past few decades is the decline of the male gaze as the main perspective in horror movies. The male gaze is defined by Oxford Dictionary as the perspective of the typical heterosexual man in media, characterized by a tendency to objectify or sexualize women.

“Having more female directors in the industry definitely helps with a greater presence of the female gaze in movies, which led to this evolution,” Goeman said.

Kubek said when the horror genre repeatedly portrayed women as expendable characters, and men as traditionally masculine heroes, it  showcased society’s values at the time.

“When you have media that is so widely consumed as movies were and still are, you’re going to have the public who consumes this media reflecting the same values subconsciously. That (media) reinforces the societal ideas of weakness in women or of toxic masculinity in men. When these are being so commonly presented in a certain genre, they’re going to start to not only reflect public opinion, but to shape it.”

Peterson said he agreed and said due to the advancement of women’s rights and other factors, gender roles in horror movies are changing to reflect the increasingly common public perception of women as strong, capable and resourceful.

Peterson said, “The film industry follows the needs of the populace. If audiences grow in their expectations, the films will grow as well.”

In regard to these changing gender roles, Goeman said an increase of female directors, writers and producers in the film industry would lead to more dynamic horror movies that would appeal to a wider audience.

They said, “The female gaze is super valuable in storytelling. I think that it’s really important that women are in this industry telling stories, and they should be able to tell those with respect and equal opportunity.”