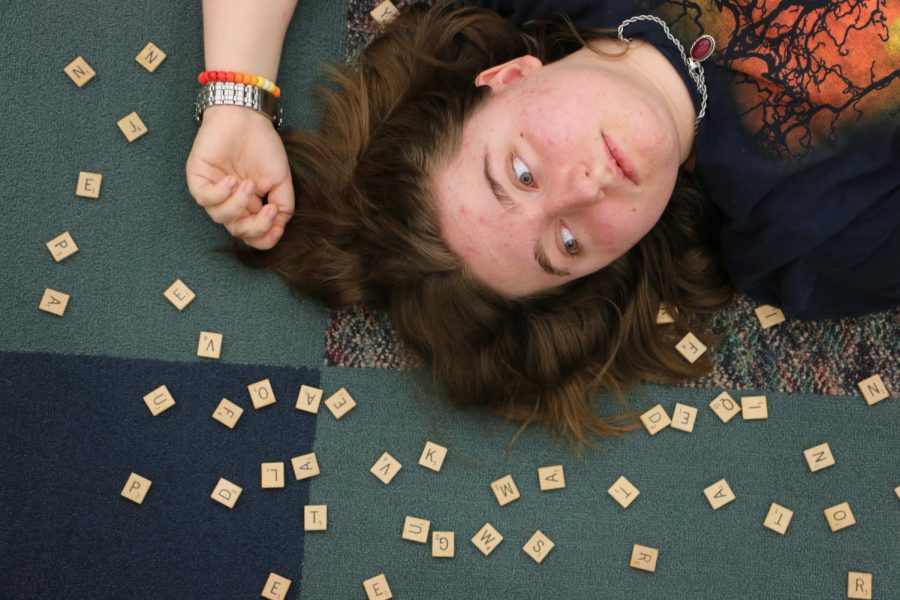 Sophomore Cecilia Pike poses with Scrabble tiles. She said she wished people would be more empathetic around people who stutter.

For Cecilia Pike, a sophomore who faced numerous issues with stuttering in the past, speech therapy allowed for an outlet to improve her communication.

“If I was doing a presentation or something like that in school (before I started speech therapy), I would have a hard time getting the words out,” Pike said. “Speech therapy basically just taught me tactics to stop stuttering or help me communicate better.”

Pike is not alone in her struggles with stuttering. According to the National Institutes of Health (NIH), up to

10% of all children stutter at some point in their lives and 25% of them end up having a lifelong stutter.

“(The NSA) had a chapter in my hometown of Phoenix and I went to a ‘Family Day,’ which was at a park with a bunch of kids who stuttered––that was the first time I met somebody else who stuttered. Before then, I felt like I was alone, that I just went through my own struggle by myself,” he said.

Short, who is currently studying economics and politics at New York University, said groups like the NSA helped him maintain contact with people who also stuttered and help each other.

“As a student, going through high school and coming into college, there were a lot of big transition periods where I had to meet new people (and) advertise about stuttering for the first time again. The NSA really aims to support people who stutter, and they really emphasize the good environment. I met a bunch of kids and teens, and as I’ve gotten older, I’ve been able to make connections with people from all walks of life who stutter. It’s been a really great experience. Just being able to support and relate to people that also stutter is a really big deal for me.”

Both Pike and Short said support therapies and groups have aided them in their speech journey, which is very similar to the goals of Nancy Robertson and Emily Nadeau, speech pathologists at CHS who provide support to students.

“Our goal is always to support the best communicator that the student can be,” Nadeau said.

According to Robertson, speech impediments often pose challenges to students at school, especially since students can be insecure about stuttering while asking a question during class or participating in other activities.

“What’s your hardest class?” Robertson asked. “Take linear algebra and imagine that the book is turned upside down. And you have to learn linear algebra but everybody’s book is faced upright and your book is upside down. Or your computer monitor, or your Zoom call has a lag, but nobody else has that. Imagine if you’re like, ‘I need to know this, I have no idea what to do next, but when I raise my hand, I might be disfluent, I might stutter, because that’s a challenge that I have.’ So then you (multiply that by a factor of) nine infinity, and it’s hard to ask a question, and you have to really think about it like ‘Oh gosh, I don’t want to be embarrassed, or of all the times I don’t want to stutter, this would be it.’ Just think about that.”

However, Robertson said being optimistic is crucial to help overcome stuttering.

“You know that saying, ‘You fall down seven times and you get back up eight?’ It’s so applicable,” she said. “When we have students who have another challenge (stuttering) on top of just how challenging high school is, and then you see them persevere and go on to college, and you see them do the next step—find a job, go to college, make new friendships—that is awe-inspiring.”

Pike said she agreed, and said after speech therapy she was able to express herself much better and learn methods of communication which helped alleviate her embarrassment, even after a few stumbles.

“I communicate better now, and I speak out more about my opinions, thoughts and feelings,” she said. “It’s easier to talk now without worrying as much about how I sound while stuttering, even though the stutter still comes in sometimes.”

In terms of improvements, Pike said she wishes there was more empathy on an interpersonal level among non-stuttering students. She said empathy can have a large impact on how students who stutter are able to express themselves.

“I think that for everyone it’s different, but if you can’t communicate well and people may make fun of you for it, and when you actually communicate, people shut you down, it just takes away that motivation to say something,” she said.

According to Short, who organizes workshops at the NSA’s annual conferences, the NSA Teens Facebook group, helps emphasize the importance of building relations and empathy. Such groups, Short said, are instrumental in helping to build an environment that can overcome stuttering.

“(The Facebook group) is…only teens; there are no adults, and it’s a close group. It’s an opportunity to just read about people who stutter, read the questions they have asked and about the people who have responded,” he said.

Short said his advice for students who stutter varies.

“My (advice) is always different and that’s kind of the point, stuttering is always different. Some days you’re going to have a great day; some days it might not be as good. The important thing is to realize that no matter how many bad days you have, you’re going to have good ones as well, and don’t let the highs get too high, don’t let the lows get too low. I think it’s important to realize that you actually aren’t alone.”