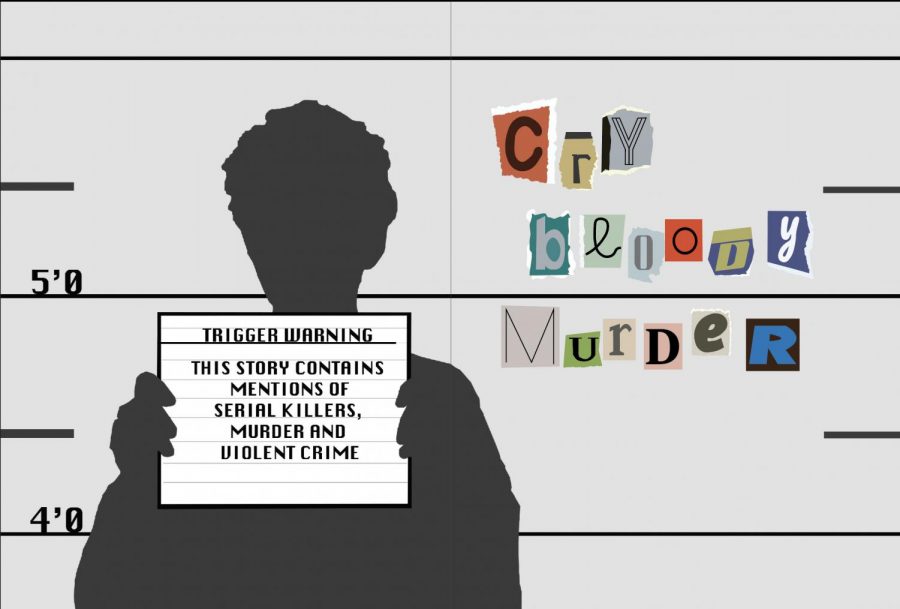 After Private investigators announced a new potential culprit for the crimes committed by the Zodiac Killer, junior Paige Walker said she noticed an increase in true crime coverage across newspapers, TV shows, movies and social media.

According to Walker, who plans to pursue a career in forensic psychology or criminal justice, the increased coverage of serial killers and violent perpetrators across the media has unfortunately directed less empathy towards victims of these violent crimes and instead shifted the focus towards criminal behavior and psychology.

“I think that, definitely, the media is playing a role in (true crime’s popularity) because people listen to these things and then they’re also not being very sensitive to it,” Walker said. “I guess there’s just kind of a fine line; I guess you just have to be careful. And I think the media probably is not, I don’t think it has anything to do with human nature. I think it’s more about being influenced by the internet.”

“As a result, it ends up being the situation where we just kind of want darker, bigger stories, and the way that we talk about them, it’s become so candid, if you will- We’ve gotten so comfortable (with violence in the media),” he said.

According to the Pew Research Center, the U.S. murder rate rose by 30% between 2019 and 2020—the largest increase in a single year in over a century. Similarly, at a local level, Indiana’s crime rate rose significantly above the national average, rising from 31% in 2019 to 45% in 2020.

English teacher Emily LeFors, who teaches the new psychological thrillers class, said she thinks because the media has increased coverage of murders proportionally with rising violent crime rates, viewers can become desensitized to these tragic and oftentimes brutal cases.

She said, “I think we, as a culture, have become insensitive to violence in general, partially because of the media that is put before us in the forms of movies and television shows. And so I think when it actually happens in real life, there’s a disconnect in the fact that it actually happened versus was fictional.”

“Honestly, it begins to reach absurd levels in which (the media) tries to create mystery or intrigue around scenarios that are pretty cut-and-dry, or they exploit victims and their families for stories. That probably needs to be handled more tactfully or respectfully,” he said. “I think that’s the thing that’s most concerning to me; We end up in these situations where we want very disturbing stories as an audience and we want there to be some deep mystery or something. But I think more often than not, you apply Occam’s razor here, just see there was a bit of bad policing, some mismanaging of evidence.”

Sophomore Sami Syed, also wants to pursue a job in crime solving, said, “(True crime) is honestly so weird and specific. These are not normal day-to-day things that you might see, so due to how interesting these cases might be people may gravitate towards them because (these cases) aren’t something you see every day.”

According to junior Anushka Pandey, who said she has conducted independent research into true crime cases, she believes the media will always focus on more violent, aggressive stories no matter the crime rate to attract a greater number of viewers.

“I think (crime coverage) is necessary to an extent because we want to be able to know what’s happening, especially in ongoing cases. But then also, kind of like with any other thing, (with) news that’s dark or a little bit too much to hear you have to set boundaries and not just be looking at that all the time,” she said. “That’s when it can start having more of a toll on your mental health,” Pandey said.

Walker said she agreed and said it has been difficult for her to consume true crime media without risking her mental health, but overall, she said she has noticed the increase in media coverage of true crime cases has made her more conscious of dangerous situations.

She referenced the so-called “Delphi murders” of Abigail Williams and Liberty German which occurred in 2017. Their bodies were found near the Monon High Bridge Trail which is part of the Delphi Historic Trails in Indiana.

“Especially the Delphi (case) was really interesting because it happened in Indiana, and it happened to two girls that were the same ages as me. So I was like, ‘Okay, well, that’s something really interesting.’ I don’t want to say it feels personal, but it’s related (to me), I guess,” she said.

Additionally, LeFors said she believes it is important for consumers of true crime media to look at true crime stories from a more generalized perspective without fixating upon serial killer cases, violent crimes and other gruesome details for the sake of their mental health.

She said, “The deficit I do think (violence in media) can play is in our society mentally, especially if you go around with the mindset that, ‘Oh, my gosh, we hear about them so much. They must all be out there,’ when I’m guessing in reality, because they’ve been sensationalized, there aren’t nearly as many as we would think.”

While Gentilcore said he agreed with LeFors, he said he believes it will be difficult for most CHS students to enjoy true crime media without being negatively influenced.

“I think, honestly, it’s gotten to a point where it’s become a little bit dangerous,” he said. “I think when it comes to the true crime genre, they know, they’ve done a lot of target research, right? They look at the demographics who are watching this. And it’s almost like they fetishize the genre, you know, and they’ve tried to really amp up these different ways they’re delivering the content to us, whether it’s in these documentaries, or podcasts or through fictionalized, or based on true story accounts.”

In fact, according to Jupiter Entertainment, one of the biggest producers of true crime television in the United States, in the last decade, the number of dedicated 24-hour crime channels has increased dramatically in both the United States and the United Kingdom. This increased obsession for true crime content caused Jupiter to create and develop 200 hours’ worth of true-crime TV shows this year.

Gentilcore said, “It just goes back to the fundamentals of economics. Where there is an increased demand for a product there is going to be an increased supply of that product. However, in the case of true-crime, and in other instances, this basic theory has major global consequences.”

According to Walker, one of these consequences has been the romanticization of serial killers, including the infamous Ted Bundy, who confessed to killing 30 young women and girls in the 1970s.

“So with Ted Bundy, I know a lot of people who thought he was hot and cute and I think that blatantly romanticizing these killers who did horrible things is just wrong. I knew that I could and would never be able to do that, but people might just because of the way the media portrays Ted Bundy. They give serial killers like him the spotlight when they present him as the main character and that just takes away from the victims which should be what people are actually focusing on,” she said.

Furthermore, according to Gentilcore, true crime media makes it unclear whether or not the criminals they depict are villains or heroes which often tests individual viewers’ moral boundaries.

“We’re just so enamored with what truly makes someone do these things, right? We want to try and understand them. Find out why this person is different from all other people and there is some sort of charisma there. There’s a sort of charm there,” Gentilcore said. “We start to question everything then. Who is a good person? Who isn’t a good person? What does it mean to be a good person? How do you become this bad of a person? We want to have these explanations for it. We want to try and attribute it to some higher understanding of good versus evil. We want to try and nail it down to, ‘Okay, are there certain mental illnesses or disorders that they have?’ A lot of times, it can be counterproductive, though, because the media puts them on such a high platform. We can only ask so many questions; you don’t really get answers and we sort of shrug and just keep talking about them in circles. I think at times that sort of ignores the bigger question that’s going on.”

According to Syed, his curiosity and an endless cycle of questioning have made him interested in careers related to solving true-crime cases.

“I am really interested in biology and so seeing all of these forensic pieces fit together on a biological level or a cellular and molecular level is really interesting,” he said. “(I want to be) the person who pieces together the different parts of the story, be the person who glues everything together and makes it all make sense. It might be fun to do that.”

Similarly, Walker said watching true-crime documentaries with her sister opened up career paths that she was not originally interested in pursuing.

“I’m kind of in between, I guess psychology and also criminal justice, which is why I think being a forensic psychologist could be a really good job for me,” Walker said. “I’m taking AP Psychology right now and it’s been a really interesting class so far, and I probably would not have taken it if I hadn’t been introduced to criminal psychology through true crime documentaries.”

According to Gentilcore, administrators and teachers at this school recognized students’ fascination with true-crime and developed the one-semester reading and composition called psychological thrillers, which both Gentilcore and LeFors teach, to satisfy students’ desires to discuss and debate on literatre themes displayed across various crime, mystery and thriller novels.

He said, “We don’t mind having conversations with (students about true crime). In fact, if we can’t talk about it here, then where can we talk about it? Because if we bring up an issue in this class, I feel like school is the safe place to have these conversations when we’re trying to have them in an educated forum, where you can back up what you’re saying what’s research and consider other people’s point of views.”

With fewer than half of reported crimes in the United States solved each year, Walker said it is important for true crime media to avoid instilling fear and distrust within its viewers, and instead focus on creating a community that remembers the lives of victims of violent crimes and fights to achieve justice for those that are deserving.

“I think people should try to solve them if they can just because it’s important to get justice for those victims and find out who did all these terrible things,” Walker said.

In the end, Gentilcore said consumers of true-crime stories should think about humanity in those cases.

“Think about the humanity in these stories and the events that you’re looking into. Do careful research, take everything you hear, and read (psychological thriller novels) with a grain of salt,” he said. “And just focus on what, what we really gain from looking at this stuff, because it can be just that sort of rabbit hole of you going down these dark, dark stories with no end in sight. So keep it in moderation, be careful, and try not to spook yourself too much.”