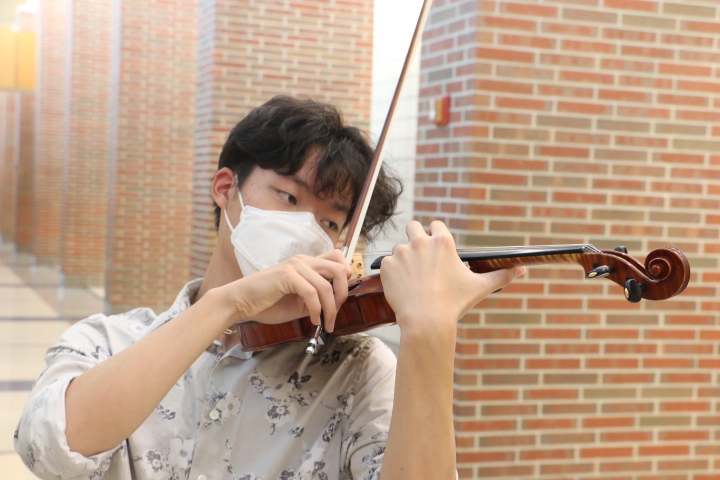 Brayden Meng plays Bach's "Partita No. 2 in D minor" on his violin. He said performing in front of a large audience is essential for him to improve as a musician.

Junior Brayden Meng recently played the violin with his non-profit ensemble, WHAM!, at a restaurant venue to give students a platform to display their music. Being part of Camerata, an elite group of orchestra players at this school, Meng emphasizes the importance of performing live in front of his audience.

“It’s a real-world experience,” Meng said, “so you can see what performing in front of a live audience would be like outside of just school performances. It also builds confidence from performing in front of an audience that you don’t know. It’s not your parents, and there are people who might even judge you. But you need to be able to perform under that pressure.”

With the holiday season approaching closer, a lot of musicians from different orchestras are busier than ever trying to prepare for their concerts.

Tamara Thweatt, principal flute for the Carmel Symphony Orchestra and flute professor at University of Indianapolis, said holiday seasons get very busy for her, especially this season.

She said, “At the University of Indianapolis, I go in about two days a week to teach my students there…this fall, I’m playing a lot with local orchestras, with a different orchestra every week, and sometimes I go in for really long days.”

As well as playing for live shows, Thweatt said she also records music at studios and plays at chamber music shows. Thweatt said, as a freelance artist, she could play at many places and that made her pretty busy at times.

Similarly, as a student composer, Meng said he arranged a piece for the upcoming winter concert put on by Camerata and was also to be used as lobby music for the concert. He said it is an arrangement of  the song “Beggin’” by a band called Måneskin, which won the 2021 Eurovision, an international songwriting competition.

“The orchestra director, (Thomas) Chen, asked me to make an arrangement of it, and we rehearsed it. It went pretty well,” Meng said. “I think he chose it because it was pretty popular on TikTok for a while, so it’s a trending song.”

Meng said transforming the original sounds to work with string instruments was an interesting task. Meng said he listened to the guitar parts repeatedly and carried over those rhythmic qualities to the second violins and violas. He said drums were the main issue, but he said he overcame it by having the orchestra players pluck the strings to create a percussive sound.

Margaret Hite, associate director of orchestras, said staging and performing an orchestra show was challenging at times as well.

She said, “Especially performing ballets (as part of the orchestra), there is just music happening all the time (and) it can be very (tiring), but you just have to realize that you have to take breaks when you need them. But it can be very mentally taxing.”

Thweatt said she agreed, saying that traveling from place to place with the added time of commuting from different places was mentally exhausting as well. She also said it was similarly exhausting to focus on playing perfectly for three-hour concerts, sometimes four to five times a week.

However, Thweatt and Hite both said they agree that performing in front of live audiences takes a lot of effort and musicians should practice if they want to pursue music as a career.

Meng said his musical pursuits have evolved over his 11 years of playing the violin, into composing music for his own use. He said he intends to pursue composition as a career.

Hite said that decision isn’t common. She said not a lot of students at this school who were involved with the music program pursued music as a career option. She said it was more common to see them become doctors, scientists or engineers.

Meng said he agreed, saying, “I think a lot of people especially in school music programs would see music as either a hobby or something that you could relatively be good at, but you’re not going to pursue it much further after high school. But to see music as a choice for a profession is different in that you have to consider the industry a lot more too, and of course your own skills. At least for me, I compare myself with a lot of current professionals just to see where I can still improve.”

Meng said he has already taken steps to make a name for himself as a professional musician by wading into the world of the music industry. He said he has already produced a self-made album called “FEEL IT” and said he is interested in composing scores for films.

Meng acknowledged he is an amateur, but he said he is trying to learn everything that he can. He said he is still searching for his style of music.

“In a way, it’s like searching for your own identity. You think of Bruno Mars, and you think of a powerhouse voice,” Meng said. “You could be a rapper, or you could sing pop music. And I don’t think I’ve exactly found that yet. So as of right now, I am just learning from all genres, absorbing it all.”

Meng said he is most invested in producing pop music at the moment. He said in a year from now, he needs to fix some technical issues with his songs to focus on promoting and marketing his music so it can reach a larger audience.

For her part, Thweatt said one had to have thick skin to become a professional musician. She said learning how to handle rejections and being open to fixing one’s mistakes was extremely necessary in adapting as a musician in the modern music industry.

She also said there were many more opportunities than being a performer for one to pursue music.

Meng said as he grows as a musician and with his career, he wanted to expand WHAM! into a larger non-profit organization than it is now that gave students the opportunity to perform live.

“Since we just started (2 months ago), I basically just invited the people I know (to the group), and they invited the people they know,” Meng said. “So it’s mostly orchestra players, singers and guitarists right now. We have a bass, a drummer and a beatboxer even. The only wind instrument we have right now is a saxophone, but we’re hoping to expand that though.”

Hite said the main idea for any artist was to remember their basics and constantly practice so that they can give the best performance they could. She also said to never lose hope and persevere as the music industry is a hard one to be successful in.

Meng said he is excited for his future as a producer.

“Look forward to ‘Xuanray’s (Meng’s stage name) new album,” Meng said. “I’ll try to get it done as soon as possible despite all the schoolwork I got, but I like it. It’s really just a fun thing for me, and I want to pursue my dreams as a career.”