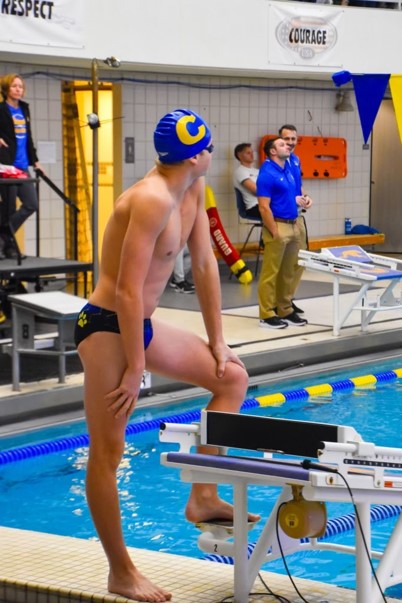 Ryan Roop, swimmer and junior, swims against Hamilton Southeastern High School in a meet. Coach Daly said that the team has a great chance to be a top contender for the State championship in early April.

The men’s varsity swimming team will swim against Homestead and Zionsville on Dec. 29. The team is still awaiting approval to compete in the Hoosier Crossroads Conference (HCC).

Ryan Roop, men’s swimmer and junior, said he is expecting a lot from himself and others on the team this coming season.

“I think we have a really great group of guys who will be ready to swim fast when the time comes. We’re a pretty tight-knit group and I think a lot of the team’s success over the years has been a result of the bonds we all have with our other teammates,” Roop said.

“Through the offseason I constantly worked on my craft and tried to be in the best possible shape I can for the season,” Roop said.

“It’s really cool to be a part of something bigger than myself. The foundation for this team was built by guys who swam here years and years before me, so I feel obligated to contribute all I can to the program to make sure that culture of success and brotherhood continues to exist after I’m gone.”

Coach Shawn Daly said the team has had a great start to the season and wants to continue winning with the momentum they have.

“We’ve started off really well. We’ve had a ton of improvement among so many of our boys, and I think we’re in a really good position to be a top team in the state this season,” Daly said.